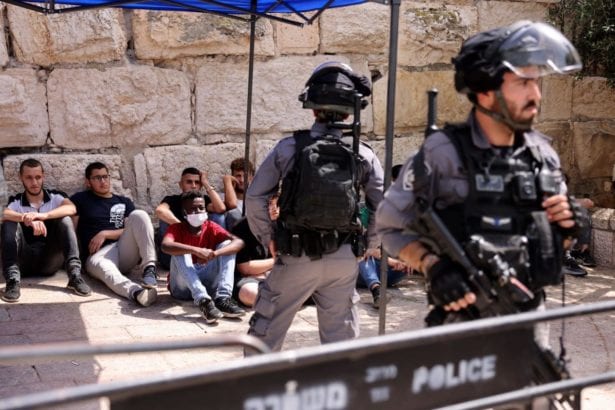 Israeli security forces stand guard next to detained Palestinians at the entrance of Jerusalem’s al-Aqsa mosque compound, on May 21, 2021

Within hours after a ceasefire is called with Gaza, Israeli security forces raided the al Aqsa mosque after Friday prayers, claiming they were responding to stone-throwing. Meanwhile, Gaza digs out of the rubble left after 11 days of Israeli airstrikes.

by Kareem Khadder and Ibrahim Dahman, reposted from CNN, May 21, 2021

Israeli security forces used stun grenades and rubber bullets against Palestinians outside the Al Aqsa mosque in Jerusalem, where thousands of worshipers had been attending Friday prayers, puncturing a half-day of calm brought on by a ceasefire between Israel and Hamas.

A CNN journalist at the mosque compound said dozens of Israeli officers hit journalists with batons and tried to point rifles at them, calling them “liars” when they showed them their press cards.

The officers moved on to the compound as thousands of worshipers chanted in solidarity with Gaza and with Palestinian residents of the East Jerusalem neighborhood of Sheikh Jarrah, where some Palestinian families are facing eviction.

An Israeli police spokesperson said the officers were responding to a riot by hundreds of young Palestinians that included the throwing of stones at police forces.

CNN witnessed people, including screaming children, fleeing the scene to the sound of stun grenade blasts. The Palestinian Red Crescent said it treated 20 injuries following clashes between Palestinians and Israeli police at the compound. Two people were taken to hospital, while the rest were treated in the field, the aid group said.

The mosque and evictions have been flashpoints in the recent conflict between Israel and the Palestinian militant group Hamas, which according to the Hamas-run health ministry, left 243 Palestinians in Gaza dead, including 66 children, and 12 in Israel — including two children — who died from militant fire, according to the IDF and Israel’s emergency service.

A ceasefire between Israel and Hamas at 2 a.m. and the streets of Jerusalem and Gaza had been peaceful, albeit lively, for hours, with Palestinians and Arab citizens of Israel celebrating the end of the worst conflict in years.

Hundreds of people drove around historically Arab east Jerusalem honking their car horns in celebration, and video footage from social media and television showed similar scenes in other cities, including Umm al-Fahm in Israel and Ramallah in the West Bank.

The Israel Defense Forces (IDF) carried out a massive aerial bombardment of Gaza, while Hamas fired thousands of rockets into Israel during the 11 days of violence.

[NOTE: Gazan rockets, which were first launched in 2001 after Israeli airstrikes had killed 570 Palestinians, have killed a total of about 40 Israelis. During the same period, Israeli air attacks have killed over 4,000 Gazans.]

Hamas’ infrastructure was pummeled by the Israeli Air Force, which took out huge sections of its tunnel network and buildings that the IDF said housed Hamas commanders or were used to store weapons.

Prime Minister Benjamin Netanyahu claimed the Israeli operation in Gaza was a success, saying in a televised address Friday that “Hamas can’t hide any more.”

“We hit Hamas more than their leaders ever could have imagined. We changed the rules of the game with this operation,” Netanyahu said.

US President Joe Biden welcomed the truce overnight after facing a barrage of criticism from within his own party that he was not doing enough to persuade Israeli Prime Minister Benjamin Netanyahu to end the country’s airstrikes in Gaza.

“I believe the Palestinians and Israelis equally deserve to live safely and securely, and enjoy equal measures of freedom, prosperity and democracy,” Biden said. “My administration will continue our quiet, relentless diplomacy toward that end.”

Biden, who has had a working relationship with Netanyahu over four decades, sought to deflect criticism that his administration had not been active enough in what has become the President’s biggest foreign policy challenge since he took office in January.

“We’ve held intensive high-level discussions, hour-by-hour, literally, (with) Egypt, the Palestinian Authority and other Middle Eastern countries with an aim of avoiding the sort of prolonged conflict we’ve seen in previous years when the hostilities have broken out,” Biden said in evening remarks on Thursday.

In northern Gaza’s Beit Hanoun, residents from a blown-out building were seen sorting through the rubble, using heavy machinery to clear the worst of the debris, as a boy stood amid the destruction, his hands covering his face in disbelief.

Personal items, including a wheelchair and a child’s bed, poked through the mounds of concrete.

Biden said he was ready “to work with the United Nations and other international stakeholders to provide rapid humanitarian assistance and to marshal international support for the people of Gaza and the Gaza reconstruction efforts.”

“We will do this in full partnership with the Palestinian Authority, not Hamas, the Authority, in a manner that does not permit Hamas to simply restock its military arsenal,” Biden said.

But the US President knows the Palestinian Authority holds limited sway in Gaza, and signs are the latest round of fighting has weakened its position outside the coastal enclave as well.

A video filmed overnight at the Al Aqsa mosque showed crowds chanting “the people demand the overthrow of the president,” in reference to Palestinian Authority President Mahmoud Abbas. It’s just one of the indications that Hamas — a rival of the Fatah movement led by Abbas — appears to have gained popular support during the conflict with Israel.

The Palestinian political situation is in itself complicated. Abbas in April delayed the first parliamentary elections in 15 years, extending a long-running rivalry where his Fatah movement governs the West Bank, while Gaza is run by Hamas. The Islamic Jihad militant group is also active in Gaza.