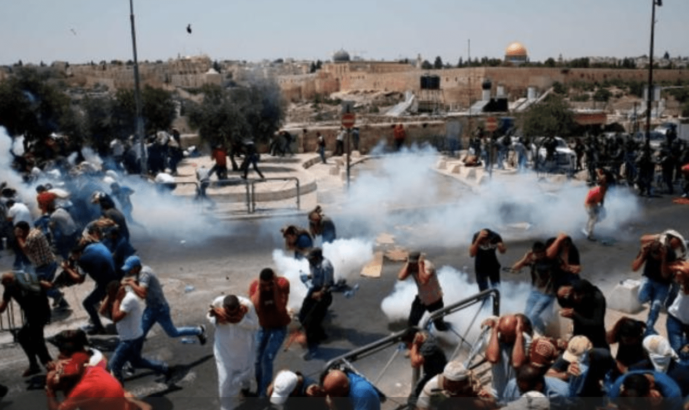 “At least 50 additional policemen have entered the mosque compound within the last hour,” one eyewitness told Anadolu Agency.

“Meanwhile,” he added, “Israeli forces have sealed the gates of Al-Aqsa and prevented anyone from entering the mosque compound.”

A Palestinian official who works in the area said that “dozens” of Palestinians had been injured after Israeli forces entered the compound and began attacking worshipers.

In a statement, Firas al-Dibs, a spokesman for Jerusalem’s Jordan-run Religious Endowments Authority, said at least 60 soldiers had entered the holy site, “where they used teargas and stun grenades to disperse worshipers after Friday prayers”.

“Fifteen Palestinians have been injured, including three mosque guards,” he added.

According to al-Dibs, the Israeli authorities have sealed the compound’s Al-Qibali Mosque with iron chains and prevented Palestinian worshippers from entering the building.

Gaza-based resistance movement Hamas, for its part, condemned the “dangerous” provocations by Israel.

In a statement, Hamas spokesman Fawzi Barhoum said: “These dangerous acts of terror are intended to target Al-Aqsa’s Muslim and Arab identity.”

Barhoum attributed the escalations to “unjust U.S. resolutions in support of the racist Jewish state”.

In a separate statement, the Islamic Jihad movement declared: “What is happening at Al-Aqsa is a serious escalation; a planned aggression against the city of Jerusalem.”

Saeb Erekat, secretary-general of the Palestine Liberation Organization (PLO), called on the international community and the Islamic world to prevent violations of the U.S.-backed Israeli forces against Masjid al-Aqsa and to provide international protection for the Palestinian people.