You Are Here: Home → Opinion: Israel uses apartheid to exclude Palestinians. When will Washington face that?

Opinion: Israel uses apartheid to exclude Palestinians. When will Washington face that? 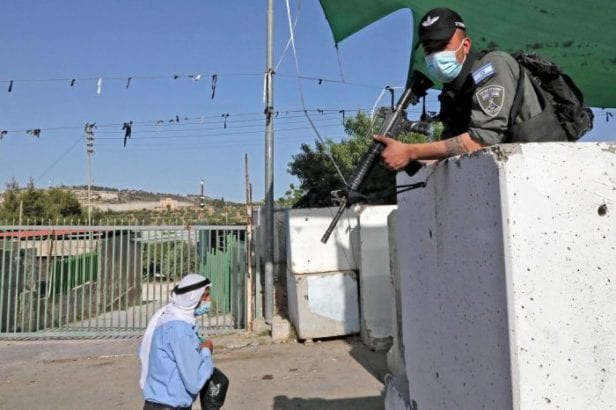 “Apartheid” is becoming a mainstream descriptor for what’s happening in Israel/Palestine. (Pictured: an Israeli soldier looks on as a Palestinian man tries to cross through the Bethlehem checkpoint in the West Bank to Jerusalem on April 23.)

H.A. Hellyer of the Carnegie Foundation calls on the American government to stop acting like Israel isn’t practicing full-blown apartheid, and start focusing on Palestinian human rights. Our leaders need to get aligned with their constituents, who are more willing than ever to be critical of Israel.

On Tuesday, the international organization Human Rights Watch released a 213-page report declaring, for the first time in its history, that the Israeli government is committing two crimes against humanity for its treatment of the Palestinians: the crimes of persecution and apartheid.

Some may think Human Rights Watch is going too far, but actually it is behind the curve. Late last year, I convened a panel with veterans of the South African anti-apartheid struggle who certainly know what apartheid looks like, including the former South African ambassador to the United States. They were in no doubt that what is happening in the occupied territories at Israel’s hands is indeed apartheid. Other human rights organizations, including Israeli ones such as B’tselem, have also reached the same conclusion.

But the report adds to the urgent calls to change the policy discussion in Washington and beyond. As a joint report released last week by the Carnegie Endowment for International Peace and the U.S./Middle East Project stipulated, the only way forward for resolving the Israeli-Palestinian conflict has to be based on fundamental human rights.

The discussion surrounding Israel’s crimes is happening as Israeli leaders are keen to push against coming to a final and just reckoning with the Palestinians before normalizing ties with governments in the region. They point to the normalization deals with the United Arab Emirates and Bahrain, described as the Abraham Accords, and to less significant arrangements with Morocco and Sudan, as evidence that the conflict with the Palestinians is not an insurmountable obstacle to stability.

That doesn’t really hold up. After all, Israel has had peace deals with Egypt for 40 years; with Jordan for more than 20 years; and yet, no Egyptian or Jordanian would say their countries’ relations with Israel are “normal.” Indeed, the very word “normalization” is anathema in Egyptian and Jordanian civil society when it comes to Israel.

The Sudanese, suffering from a crushing economic crisis, were essentially blackmailed into the move, which may or may not last after the establishment of a Sudanese national assembly. The Moroccans exchanged limited diplomatic ties for a big coup:U.S. recognition of Moroccan sovereignty over Western Sahara. Even with Emirati and Bahraini participation in the accords, Arab civil society writ large is adamantly opposed to normalization because the Palestine question remains unresolved.

On the other hand, American public opinion is much more balanced than the policy discussion, with voices critical of Israel gaining more acceptance. Perhaps social media has strengthened an exchange of views that has led to that kind of shift — these two recent reports on Israeli apartheid also reflect that.

The Black Lives Matter movement and the calls for a more entrenched form of equality among Americans have captured the attention and energy of many Americans, and that has had an impact. After all, it is hard to make the argument that civil rights ought to matter at home while rejecting the option of a rights-based approach for resolving the conflict between the Palestinians and the Israelis abroad.

For years, American foreign policy has provided unconditional support for Israeli leaders, shielding them even from the censure of most Western allies. Israel’s actions in the occupied territories, and the continuation of the occupation itself, was treated like a third rail in politics — but not anymore. This American approach is being eroded, including in Congress.

It may be years before the resounding evidence against Israel produces new U.S. policies to address the undeniable reality on the ground. But a decade ago I could not have dreamed of any such report being published from a reputable D.C.-based institution.

In 2021, from the heart of Washington’s policymaking community, one of the world’s most influential think tanks, not only platformed such a report but promoted it vigorously. The direction of policy discussions is changing — it’s simply a question of how long it will take for the rest of D.C.’s policy establishment to catch up.

H. A. Hellyer is a Carnegie Endowment for International Peace scholar in Washington and senior associate fellow at the Royal United Services Institute in London.