You Are Here: Home → Liberal rabbi calls on US Jews to stand up for Israeli ‘siblings’ against a hostile press 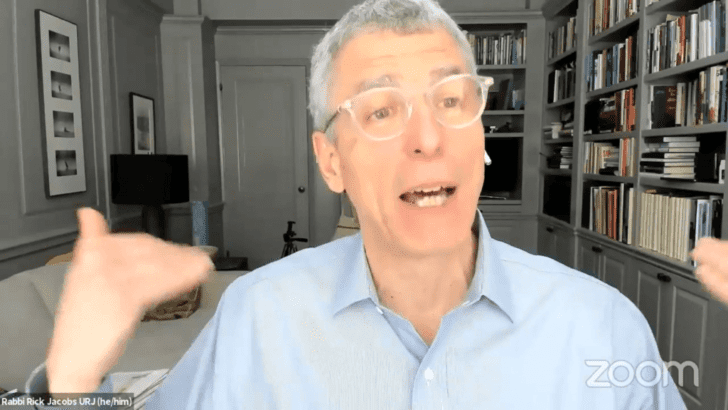 “In terms of the media, I think we are losing ground.”

Israel’s latest war has proved to be a p.r. disaster. Geraldo Rivera has accused Israel of “war crimes” on Fox News. John Oliver has made the same accusation on HBO. MSNBC pundits Reid and Velshi are speaking openly of “apartheid.” Trevor Noah has said that Israel has not shown “responsibility” for its power to hurt Gazans. Even public radio hosts are expressing skepticism about the country’s goals.

That’s a clarion call for U.S. Jews to “stand completely” behind their Israeli “siblings,” the leader of the largest U.S. Jewish group says.

On a May 13 call about the conflict Rabbi Rick Jacobs of the Union for Reform Judaism said the moral issues here are simple, and it’s time for American Jews to show “solidarity and love” with Israel by countering that bad press.

This is a moment, friends, that isn’t complicated. This is about the deepest connection that we feel with our siblings in Israel. And they are under attack and we stand completely with them. There will be time for complex discussions and arguments and debates [later].

Our movement is still the largest movement in Jewish life and to this moment it’s the largest Zionist movement, and eight out of ten of those surveyed said that Israel was essential, was critical. We feel that and we need to express that.

I want to give just one piece of work to everyone on this call today. In terms of the media, I think we are losing ground. I don’t think our case is being made well in media and social media, so let’s all take it upon ourselves to be the people who communicate with our circles. our communities and raise the voice of solidarity and love… We are with all of our siblings.

Jacobs is plainly reflecting the opinion of his Jewish “siblings”: Jewish Israeli society is virtually united behind the bombing of Gaza. Benjamin Netanyahu has gained political strength from the hostilities, and left-leaning Israeli Jewish leaders are not directly opposing the war effort.

Gideon Levy says that’s because the media don’t inform Israelis about the terrible suffering happening in the south.

“[T]he results aren’t being displayed. Israelis don’t have a clue about what’s happening in Gaza, not a notion of what the military is doing in their name. That’s why they’re clamoring for more, why they’re so certain of the justice of their cause.”

And while the blackout may be unifying Israel, world media are making the onslaught a public relations disaster for Israel.

The contradiction came up yesterday during an Israel lobby call. A supporter of Israel, Maura Resnick of the Y&S Nazarian Center at UCLA, asked about the imbalance between Israeli media and world media on an Israel Policy Forum call yesterday:

I understand that the Israeli media are not showing images of devastation in Gaza and of course we in the U.S. are seeing this all the time, and it is turning more public opinion against Israel. If these images were shown, would they influence Israeli public opinion abut the wisdom of this latest Israeli military assault?

Shira Efron, who works at a national security think-tank in Israel, said there’s a tradition of Jewish Israelis unifying and rejecting alternative views during a conflict. And right now they are sleeping well at night.

I think the dominant narrative in Israel and we’ve seen this before in previous rounds of fighting at least at the beginning of operations. there is a sentiment and largely for a good reason. it’s asymmetric warfare, we didn’t start this fight, from an Israeli perspective, their narrative [is], there are [Palestinian] civilians everywhere– headquarters, productions facilities, intelligence facilities are all imbedded within civilians… The IDF does go way [above] and beyond to warn civilians. So in the Israeli mindset that is enough….

We’ve seen it also in other surveys and polls. There’s less compassion than you would think for the other life and there’s a sentiment also in Israel, Hamas won the elections and … there’s this idea that Oh, the population of Gaza, they support the Hamas regime and therefore, what can you do?

Efron said that narrative only changes with drawn-out wars and “really catastrophic” events, such as the 2006 bombing of a building in Qana, Lebanon, in which civilians had sought sanctuary, in which 57 were killed, 37 of them children.

“If you have one big incident then I think the mind shift changes,” she concluded. “But for the most part, I think most Israelis sleep well at right.”