You Are Here: Home → Latest meeting of America’s most powerful pro-Israel lobby 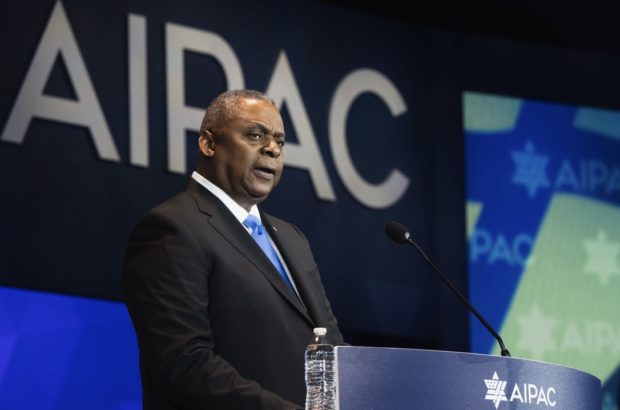 The content of AIPAC’s recent Political Leadership Forum was largely concealed from the public, but here is some of what we’ve been able to glean about it.

The conference was closed to journalists, and only excerpts of some speeches have been released. Speakers included Israel’s Prime Minister, Benjamin Netanyahu (via video call) on Monday, and US Secretary of Defense Lloyd J. Austin III (in person) on Tuesday. Below is a partial summary of their remarks.

PM Netanyahu addressed, among other topics, his hope to see the Trump-era Abraham Accords expand to include more Arab nations (read about the Abraham Accords here). According to the Israeli daily Ha’aretz, he is optimistic because many Arab leaders have changed their perception of Israel and now see it as a partner rather than an enemy.”

Secretary Austin likewise stated his eagerness to “deepen and broaden the Abraham Accords and to forge other normalization agreements.”

Both men overlooked the fact that in a recent UN meeting, all of the Abraham Accords signatories (United Arab Emirates, Bahrain, and Morocco) – as well as every other Arab country – had voted against Israel on a resolution calling for the International Court of Justice to weigh in on the occupation of the Palestinian territories.

The Israeli Prime Minister made reference to Iran, which is under worldwide scrutiny at the moment for its brutal suppression of human rights protest. Netanyahu labeled Iran “a terrible regime, depressive and terroristic.”

The US Secretary of Defense similarly stressed Iran’s oppression: “The regime has killed, and beaten, and jailed its own citizens for daring to speak out against its repressive rule,” adding, “we’re working closely with Israel and our allies and partners to impose coordinated pressure on the Iranian regime.”

Neither of the speakers acknowledged Israel’s own brutal suppression of Palestinian protesters and resistors (for  examples, go here). United Nations data shows that in 2022, Israeli troops killed over 150 Palestinians in the West Bank alone (almost 50 in Gaza) – more than any other year since the UN started keeping track.

So far in 2023, at least 14 Palestinians have been killed already. Thousands more are held in prison or administrative detention without charge or trial – and many prisoners are tortured.

AIPAC issued a statement in late December, immediately after the new Israeli government had been formed, congratulating the state and its new prime minister, adding, “Once again, the Jewish state has demonstrated that it is a robust democracy with the freedoms that Americans also cherish.”

Within a few days after forming the new government in December, PM Netanyahu tweeted the coalition’s intentions – which exclude any language about democracy:

(Note: “the Galilee” is part of the current state of Israel, but less than half of the population is Jewish; “the Golan Heights” and “Judea and Samaria” refer to lands belonging to Syria and Palestine, respectively; the internationally recognized name of “Judea and Samaria” is Occupied Palestinian Territory. 20% of the citizens of Israel and roughly 50% of the population over which Israel exercises control are Palestinian Arabs, largely Muslim and Christian.)

Rather than responding to Netanyahu’s blunt assertion, US Secretary of Defense Austin quoted a statement the Prime Minister had made back in November:”[We] will work for the benefit of all residents of the state of Israel, without exception” – a promise that preceded the formation of a government coalition that included some of the most extremist members in recent memory.

Notably, Israel has defied international law and the demands of the global community since the country’s inception – including its constant drive to build illegal settlements on Palestinian land and transfer Jewish Israeli citizens to that land.

Austin went on to list the financial perks that the US is providing to Israel, including $3.8 billion annually in military aid (“the highest it’s ever been”). (Note: Congress spends another $3 billion a year on projects that benefit Israel, for a total of about $7 billion a year – $20 million a day.)

While some Congress members have pressed to block aid to Israel while it is in defiance of international (and US) law, the effort has gained little traction.

Based on the limited information available from the conference, it appears that no one acknowledged the extremist character of the new Israeli government, though its actions have already been widely criticized (for example, see this, this, and this).

As my friend Secretary of State Blinken noted recently, we’ll continue to evaluate this democratically elected government by its policies.

From the limited transcripts available, it appears that PM Netanyahu did not comment on the Palestinians.

However, Secretary Austin did broach the subject, declaring,

[F]or Israel’s long-term security, there is still no substitute for a just and lasting peace between Israelis and Palestinians. As President Biden has said, “a two-state solution is the best way to ensure Israel’s future as a Jewish, democratic state—living in peace alongside a viable, sovereign, and democratic Palestinian state.”

And anything that drives us further from that possibility harms Israel’s long-term security.

And we’ll continue to work to prevent any parties from taking actions that could push the two-state solution further out of reach.

And we’ll work to speak with our Israeli friends honestly and respectfully, as partners should.

And we’ll continue to oppose any acts that could trigger more insecurity.

That includes Palestinian terrorist attacks and moves to delegitimize Israel.

It includes disrupting the historic status quo at holy sites in Jerusalem and elsewhere.

And it includes any incitement to violence.

Several of these statements appear to make oblique reference to the new administration’s plan to prioritize settlement expansion, as well as recent attempts by Israel’s new Minister of National Security, Itamar Ben Gvir, to challenge the delicate status quo at the Al Aqsa Mosque Compound (known to Jews as the Temple Mount). Others disregard the fact that it is Israel that continues to kill people in large numbers, and display America’s blatant bias toward Israel and its security, without regard for Palestinians’ needs.

Austin’s remarks discount the broadening consensus that the so-called Two State Solution is no longer viable (for example, see this, this, and this).

The American-Israel Public Affairs Committee includes under its auspices a traditional political action committee (AIPAC PAC) and a Super PAC (United Democracy Project). Together, the Jewish Telegraphic Agency (JTA) reports that the PACs raised over $50 million to support 375 candidates in the 2022 election cycle, and boasted a 93% success rate.

A number of the AIPAC-backed candidates, however, were opposed by Democrats.

OTHER VALUABLE ARTICLES ON THE ISRAEL/PALESTINE ISSUE: