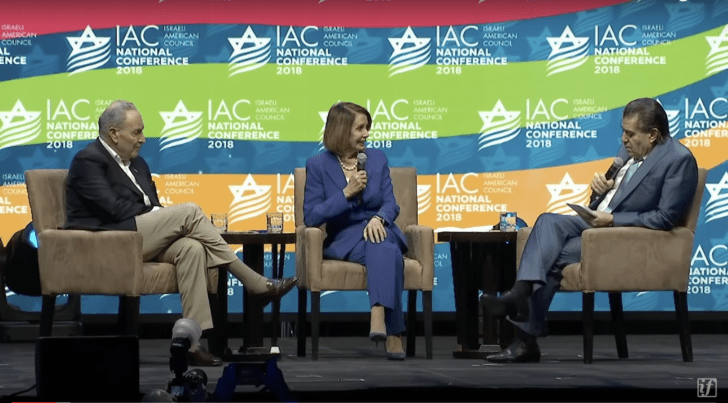 AIPAC’s superpac has raised nearly $16 million in three months… That’s why the NY Times called “Jewish donors” who prioritize Israel the “elephant in the room” of our foreign policy. Or why a J Street panel said that the clout of Jewish donors in the Democratic Party is “gigantic” and “shocking”…

By Philip Weiss, reposted from Mondoweiss  [Subheads and some photos added by IAK]

Yesterday AIPAC gave a statement about its big spending in Democratic Party primary races that set down the political rules for Democrats discussing Israel. Criticizing Israel is a red line– don’t cross that line. Haim Saban, one of the party’s largest donors, is there to enforce the line, from the top down. Because it really is all about the Benjamins– the money.

Here’s the statement that the head of AIPAC’s superpac (the United Democracy Project) gave to Jewish Insider:

“We intend to be active in a significant number of races where there is a clear difference between a candidate who supports a strong U.S.-Israel relationship and a candidate that does not or who may seek to undermine that relationship,” UDP spokesperson Patrick Dorton told JI. “Our goal is to help build the broadest bipartisan coalition of candidates who support the U.S.-Israel relationship… Our activist donors, who include one of the largest donors to the Democratic Party, are focused on ensuring that we have a U.S. Congress that, like President Biden, supports a vibrant and robust relationship with our democratic ally, Israel.”

That largest activist donor is Haim Saban, who gave $1 million to that superpac and has said, “I’m a one-issue guy and my issue is Israel.”

Saban has been setting the rules for a long time in the Democratic Party establishment. He kept Barack Obama in line on Israel and raised a lot of money for him. Next, he negotiated Hillary Clinton’s stances on Israel in 2015 so that she could keep “Jewish donors;” Clinton came out for Obama’s Iran deal but also issued a statement against BDS, the boycott campaign targeting Israel. Saban warned Clinton’s campaign staff (per leaked emails), that “thousands” of Israel supporters needed clear signals on her Israel stance.

You can see the names of a few dozen high rollers in the AIPAC superpac’s fundraising report for the last 3 months– nearly $16 million! That’s a lot of money in a hurry. That’s why the New York Times called “Jewish donors” who prioritize Israel the “elephant in the room” of our foreign policy. Or why a J Street panel said that the clout of Jewish donors in the Democratic Party is “gigantic” and “shocking.”

That’s why Nancy Pelosi (who raises a lot of money from Saban) said the Capitol will crumble and fall before Congress walks away from Israel. And why in 2016 and 2020 again, the Democratic Party removed any references to occupation from its platform– with Joe Biden personally intervening to remove the word the last time. Just as Barack Obama personally intervened to put the words, “Jerusalem is and will remain the capital of Israel,” into the party platform in 2012– infuriating the Democratic base.

The Democratic base doesn’t think the Israel relationship is at all important. Democratic voters put Israel at 9 on a list of allies.

But this is a battle between the Democratic establishment and the base. Haim Saban worked closely with the late Sheldon Adelson, Trump’s biggest donor, when it came to Israel, and is very friendly with Jared Kushner, Trump’s son-in-law and chief envoy on the Middle East. But all that is forgiven when you’re talking about a key donor to the Democratic Party.

As for those congressional candidates who “may seek to undermine” the relationship with Israel, AIPAC is concerned that the Squad of progressive Democrats in Congress is going to grow.

AIPAC shares that fear of the Squad with Democratic Majority for Israel, an organization that began just three years ago when the first Squad members got elected to Congress. DMFI’s trademark is to pour money into a race in an urban district where a progressive candidate of color is being critical of Israel so as to support Israel-friendly candidates. Ritchie Torres is their poster child — the Bronx politician who lately said, “I try to approach the [Iran] issue not from the perspective of an American, but from the perspective of an Israeli.”

DMFI helped defeat Nina Turner in a Cleveland primary last year for an empty seat, and Turner is running again and getting attacked repeatedly by AIPAC as “anti-Israel” because she is a Sanders Democrat who has offered mild criticisms of Israel. Struggling now to clear her name, against an opponent who has AIPAC’s backing, Turner says she is “heartbroken by the defamation” that she is antisemitic– “Some of those attacks were funded by Republican interests and even Trump donors.”

Turner says the attacks are seeking to drive a wedge between the Jewish and black communities, both of which have fought white supremacy in the U.S.

So it’s O.K. in the Democratic Party to critique white supremacy in the U.S., but you get railroaded if you bring up Jewish supremacy in Israel. Several apartheid reports from leading human rights organizations [here] have documented that supremacy — if you mention them, then you are smeared as an antisemite by a fellow Democrat on the House floor, because you “besmirched” Israel.

The leftwing of the Israel lobby isn’t all that helpful when it comes to Israel policy. J Street is fighting a good fight with AIPAC over AIPAC’s support for Trumpist Republicans, but J Street is reinforcing some of the same red lines on Israel. It says that supporting BDS is antisemitic, and it rejects the conclusion of countless human rights groups that Israel is an apartheid state.

This is a battle between the Democratic establishment and the grassroots. Twice as many Democratic voters want our country to take the Palestinian side as those who want it to take Israel’s side (17.9 to 9.5%) according to the University of Maryland. Their views are not being reflected, because money is the mother’s milk of politics.