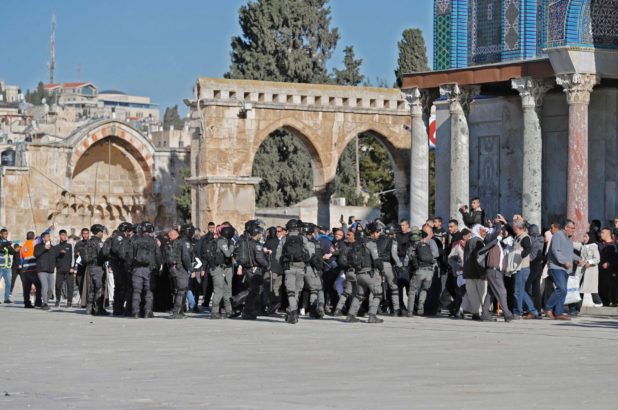 reposted from The Palestinian Center For Human Rights (PCHR), April 15, 2022

At least 153 Palestinians were wounded, including six in critical state, three journalists, and three paramedics, during the Israeli occupation forces (IOF) raid and extensive attacks at dawn Friday on thousands of worshipers at al-Aqsa Mosque and its yards in occupied East Jerusalem. IOF launched a mass-arrest campaign after its breach into the holy mosque, at least 400 worshippers were arrested.

As per PCHR investigations, as al-Aqsa Mosque’s gates were opened and thousands of worshipers arrived for al-Fajir (dawn) prayers on Friday, 15 April 2022, the atmosphere was extremely tense due to the heavy IOF presence in the area, and on the rooftops near al-Silsila and al-Magharba gates.

Thousands of worshippers gathered and prayed; after al-Fajir prayer, young men prepared wooden roadblocks around the al-Qibli prayer hall in anticipation of a possible IOF raid.

They fired firecrackers towards al-Magharba gate where IOF was stationed. Immediately, IOF raided the entire Mosque with hundreds of troops; the soldiers started shooting live bullets, tear gas canisters and stun grenades aggressively and randomly. As a result, dozens of worshipers and gathered civilians were wounded.

All the while, clashes erupted between young Palestinian men who threw stones and pieces of wood at IOF who continued to fire rubber-bullets, sounds bombs, and tear gas canisters; the latter also assaulted the worshipers all over the holy Mosque’s grounds and shut all pathways leading to the holy site, banning medical crews entry, and hindering ambulances’ access to Bab al-Asbat area to transport the wounded to hospitals.

IOF also attacked al-Aqsa Mosque guards, medical and media crews, and paramedics, with rubber-bullets, and clubs; IOF threatened the rescue crews attempting to reach the wounded inside the Mosque and confiscated the key to several ambulances. IOF also surrounded al-Aqsa Mosque’s clinic while offering first aid to dozens of wounded persons and fired tear gas canisters at it.

Earlier today, IOF troops mounted the roof of al-Qibli Mosque shattered the top windows, and installed snipers on top. They shot live bullets, rubber-bullets, and tear gas canisters inside the mosque where hundreds were worshiping and praying.

Minutes later, large numbers of IOF entered the mosque, and forced worshippers to lay down. The soldiers physically and violently assaulted the praying crown, and arrested hundreds. This is a precedent for IOF attacks on Palestinian worshippers.

The attacks and raid lasted for hours. At approximately 10:00, IOF took hundreds of hand-cuffed arrestees through al-Magharibah gate, searched, and inspected them near the Western Wall. Minutes later, IOF reentered the holy Mosque, and forced worshippers to evacuate, pushed and assaulted the women present in the area as well, causing clashed to reignite.

Meanwhile, settlers tried to raid al-Aqsa Mosque carrying sheep upon calls from settlement organizations to slaughter them for ritual sacrifices in the mosque, but the Israeli police stopped them.

Due to IOF’s widescale suppression operation that continued for hours, 152 Palestinians were injured and taken to al-Makassed Hospital and the Red Crescent field hospital as announced by the Red Crescent Society in Jerusalem.  According to PCHR fieldworkers’ follow-up, 3 paramedics were among those injured; one was injured with a rubber bullet in the neck and the other 2 sustained fractures in their hands.  Also, 3 journalists were wounded and identified as Mohammed al-Samarin, Nirseen Salem, who were both injured with rubber bullets, and photojournalist Rami al-Khatib, who sustained injuries in the head and hands after IOF severely beat him with batons.

Moreover, 2 of al-Aqsa guards were injured with rubber bullets in their eyes.  Soliman Turkman, the Nursing Director at al-Makassed Hospital, said to PCHR’s fieldworker that at least 75 persons injured arrived at the hospital, including one in critical condition, 5 admitted to the Operating Room immediately, and 35 admitted to the hospital’s departments.  Turkman added that injuries varied and included women, children, and elderlies.

Lawyer Feras al-Jabrini said that IOF arrested more than 400 Palestinians from al-Aqsa mosque; most of them were in al-Qibli Chapel and took them in buses from Bab al-Magharba area to Matsuda Adumim Interrogation Centre.

It should be noted that on Thursday afternoon, 14 April 2022, around 2000 worshippers performed I’tikaf in the Qibli Chapel in al-Aqsa Mosque despite IOF’s harassment and heavy deployment in the mosque yards, at its gates and around it to.

This was upon national calls to mobilize on Friday dawn, 15 April 2022, against settlers’ attempts to hold sacrifices after calls from settlement organizations for the Jewish Passover holiday, which start today and continue for a week, provoking extensive outrage among Palestinians.  Therefore, the Israeli authorities announced to stop any sacrifice attempts.

PCHR strongly condemns IOF’s suppression of the Palestinian worshippers and raid and desecration of al-Aqsa Mosque and its chapels as well as firing live and rubber bullets, sound bombs and teargas canisters inside it.  PCHR warns of the serious repercussions of the escalating violence and settlers’ conduct that is backed by IOF’s official protection.

PCHR reiterates that East Jerusalem is an occupied city, and the Israeli authorities’ measures taken after the occupation of the City in 1967 would not change its legal status as an occupied territory.