You Are Here: Home → More Palestinian deaths at the hands of Israel on Wednesday

More Palestinian deaths at the hands of Israel on Wednesday 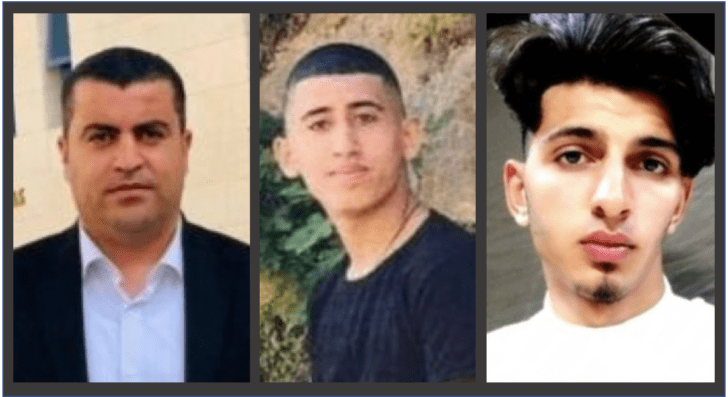 Israeli forces, heavily armed and not in any immediate danger, continue to invade Palestinian neighborhoods and fire live rounds, killing at least four Palestinians on Wednesday.

NOTE: this article has been updated to remove Amir Hussein Hammad’s name from the list of fatalities. Hammad remains, to the best of IMEMC’s knowledge, in critical condition, but is alive.]

Israeli soldiers killed, Wednesday evening, a child and injured many Palestinians, in Husan village, west of Bethlehem, in the occupied West Bank.

Media sources said many army jeeps invaded the al-Matina area near the main road of Husan, leading to protests.

The soldiers fired many live rounds, rubber-coated steel bullets, and gas bombs at the protesters and many surrounding homes, causing many injuries.

The Palestinian Health Ministry has confirmed that the soldiers shot a child, Qussai Fuad Hamamra, 14 years of age, with a live round in the head and left him bleeding without first aid, especially after the army prevented the Palestinian medics from reaching him.

It added that the soldiers took the corpse of the slain child and refused [at first] to allow its transfer to the Palestinian side.

The army transferred the corpse of the slain child to his family at dawn Thursday.

The child was walking home after performing evening prayers at the local mosque; the soldiers also surrounded the mosque after killing the child and refused to allow the Palestinians to leave.

The army made several allegations, including claiming that the child was throwing stones at the soldiers or that he was throwing a Molotov cocktail. However, eyewitnesses said Qussai was not participating in any protests but was walking back home from the local mosque.

Protests were still ongoing at the time of this report, and the soldiers continued to fire dozens of live rounds and rubber-coated steel bullets, gas bombs, and concussion grenades.

Medical sources have confirmed at least six injuries, including some with live fire and rubber-coated steel bullets and many who suffered the effects of tear gas inhalation.

Dozens of Palestinians suffered the effects of tear gas inhalation, especially after the soldiers fired gas bombs at mosques to force the locals to leave.

The child was killed not far from where the Israeli soldiers killed Ghada Ibrahim Ali Sabateen, 48, on April 10, 2022.

Israeli soldiers killed, Wednesday morning, a Palestinian lawyer after firing many live rounds at his car in the Industrial Area in Nablus city, in the northern part of the occupied West Bank.

The slain Palestinian, Mohammad Hasan Assaf, 34, was from Kafr Laqif village in Qalqilia, in the northern part of the West Bank. The soldiers shot him with a live round in the chest.

Mohammad, a father of three children, the oldest of them is only four years of age, was killed by the soldiers while returning home after driving his sons and nephews to school; he was returning from the Industrial Area in Nablus when the soldiers fired at his car and killed him.

Mohammad was killed when the Israeli soldiers were withdrawing from Nablus after a massive invasion into several areas, causing dozens of injuries; many were shot with live fire.

Eyewitnesses said the army fired dozens of live rounds at cars, homes, and streets while withdrawing from the area.

The soldiers stormed and ransacked dozens of homes in Beita town, the eastern area of Nablus city, and many villages and towns overnight.

Mohammad was a lawyer with the Wall & Colonization Resistance Commission and was a well-known figure and social activist who represented dozens of families in Israeli courts, filed appeals against the illegal Israeli annexation of Palestinian lands, and defended the rights of the Palestinians, especially the farmers and villagers.

Mohammad was also a known figure, not just to the Palestinians for defending their rights and lands from illegal Israeli annexation and colonies, but also by the Israeli occupation soldiers for his constant participation in the ongoing nonviolent processions against the illegal Israeli Annexation Wall, and the colonies.

He was also known in Israeli courts for representing the families and filing appeals to void illegal annexation orders of the Palestinian lands.
His corpse was moved from Rafidia hospital in Nablus to his home in Kafr Laqif town in Qalqilia.

Thousands of Palestinians participated in Mohammad’s funeral ceremony and burial while chanting against the escalating Israeli crimes and violations and calling for resisting the occupation until liberation and independence.

The invasion into Silwad started in the evening, leading to protests for several hours.

The Palestinian Health Ministry confirmed that the soldiers killed Omar Mohammad Elyan, 20, and added that the army shot him with a live round in the chest.

The Health Ministry said the soldiers also shot and seriously injured one Palestinian and moderately wounded another.

The army also injured five other Palestinians who were rushed to a local clinic by the medics before the soldiers surrounded it.

The WAFA Palestinian News Agency said a young man was injured when the soldiers rammed him with their armored military jeep.

OTHER RECENT VIOLENCE BY ISRAEL: