You Are Here: Home → AIPAC eludes US law, part of international lobby for Israel 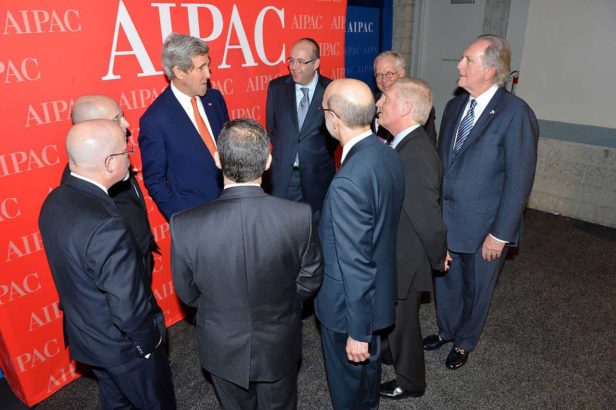 Former Secretary of State John Kerry meeting with AIPAC leaders at the annual convention in Washington, D.C., March 3, 2014. Giraldi: ‘The unrelenting pressure to make criticism of Israel illegal is particularly dangerous as it is international.’

The Judiciary Committee hearing was originally set up to look at the possible Russian links of former journalist and head of the research firm Fusion GPS Glenn Simpson, who was behind the infamous Trump dossier that appeared in January. Yet in reality it is part of the broader effort to determine whether Moscow interfered in the 2016 election on behalf of the Donald Trump campaign.

FARA was created in the lead up to World War II to help monitor the activity of Italian, German and Japanese agent-lobbyists who were believed to be working hard in the U.S. to influence opinion as well as congressional votes in favor of their respective sponsoring nations. The intention was to force the “foreign agents” to register with the Department of the Treasury so they would have to identify their government sponsors and be required to reveal their sources of income.

FARA is not very rigorously enforced, which was one of the points that the Judiciary Committee was prepared to address in regards to Russia, but there can be consequences for those who ignore it. Former National Security Adviser Michael Flynn was recently compelled to register as an agent of Turkey after he received $530,000 in payments to support Ankara’s view regarding those it believed to be behind last year’s coup.

AIPAC has broken the law for 55 years

Ironically, the most powerful and effective foreign-government lobby in Washington is so dominant that it has been able to avoid registering for the past 55 years. The American Israel Public Affairs Committee (AIPAC) was last confronted by FARA when its predecessor organization the American Zionist Council was pressured by John F. Kennedy’s Justice Department in 1962 and 1963. Kennedy’s death stopped that effort—and ended White House attempts to hold Israel accountable for the development of its secret nuclear weapons program (which depended on nuclear material removed illegally from the United States with the connivance of a company located in Pennsylvania called NUMEC).

AIPAC’s website declares that it is “America’s Pro-Israel Lobby,” so by its own admission it functions pretty clearly as Israel’s proxy. It spent $102 million in 2015, had 396 employees in 2013, and claims to have 100,000 members, many of whom are organized into state and city chapters. It also benefits from being a tax exempt 501(c)4 organization classified as promoting “international understanding.” Its annual Summit in Washington attracts more than 15,000 participants, including scores of congressmen and other senior government officials. It blankets Capitol Hill with its lobbyists and is a prolific source of position papers explaining Israel’s perception of what is taking place in the Middle East. Its easy access to the media and also to politicians in Washington is so widely accepted on Capitol Hill that it reportedly frequently drafts bills that Congress then goes on to propose.

No Washington lobby is benign. Lobbies exist to subvert the public interest. They promote particular agendas and are not intended to enhance the general well-being of the American public. Lobbyists would argue that they are in the information business, that they make lawmakers aware of facts that impact on pending legislation, but the reality is that every lobby is nevertheless driven by self-interest.

The power of the Israel Lobby and of AIPAC is not cost free for the American public. The current $3 billion plus that Israel, with a thriving first world economy, receives in military assistance is on top of the $130 billion that it has received since 1949. Protecting Israel in international organizations like the United Nations has sometimes marginalized the U.S. in such bodies and the lobby’s influence over American foreign policy has often been noted. In 2010 General David Petraeus stated that Israeli policies were putting American military personnel in the Middle East in danger. He quickly recanted, however.

Once upon a time AIPAC’s Steven Rosen boasted to an interviewer, “You see this napkin? In twenty-four hours, we could have the signatures of seventy senators on this napkin.” He meant that congressmen would sign on to anything if they thought it would please Israel. Recently the U.S. Congress has been working on bills that would criminalize individuals or groups that support a boycott of Israel. It would not be the first such legislation. The 2015 omnibus trade agreement with Europe included an amendment mandating that nations engaging in anti-Israel boycotts, to include “Israeli controlled territories,” should be subject to retaliatory action by the U.S.

There are currently two bills constituting the Israel Anti-Boycott Act of 2017 (S.720 and H.R. 1697) being considered by the Senate and House that outdo any previous deference to Israeli interests. The Senate bill was introduced by Senator Ben Cardin, who also had a hand in the trade-legislation amendments protecting Israel. According to the Jewish Telegraph Agency, the bill was drafted with the assistance of AIPAC. The legislation, which would almost certainly be overturned as unconstitutional if it ever does in fact become law, is particularly dangerous, and goes well beyond any previous pro-Israeli legislation, essentially denying free speech when the subject is Israel.

The two versions of the bill that are moving through Congress have 238 sponsors and cosponsors in the House and 46 in the Senate. If you do your math, you will realize that those numbers already constitute a majority in the House and are only five short of one in the Senate, so passage of the bills is virtually assured. The bill’s sponsors include many congressmen who have in the past frequently spoken out in defense of free speech, with Senator Ted Cruz having said in 2014, for example, that “The First Amendment was enacted to protect unreasonable speech. I, for one, certainly don’t want our speech limited to speech that elected politicians in Washington think is reasonable.”

The movement that is particularly targeted by the bills is referred to as BDS, or Boycott, Divestment, and Sanctions. It is a non-violen  t reaction to the Israeli military occupation of Palestinian land on the West Bank and the continued building of Jewish-only settlements. BDS has been targeted both by the Israeli government and by AIPAC. The AIPAC website, which describes the group’s lobbying agenda, includes the promotion of the Israel Anti-Boycott Act as a top priority.

The Israeli government and its American supporters particularly fear BDS because it has become quite popular, particularly on university campuses, where administrative steps have frequently been taken to suppress it. The denial of free speech on campus when it relates to Israel has sometimes been referred to as the “Palestinian exception.” Nevertheless, the message continues to resonate, due both to its non-violence its and human rights appeal. It challenges Israel’s arbitrary military rule over 3 million Palestinians on the West Bank who have onerous restrictions placed on nearly every aspect of their daily lives. And its underlying message is that Israel is a rogue state engaging in actions that are widely considered to be both illegal and immoral, which the Israeli government rightly sees as potentially delegitimizing.

Twenty-one state legislatures have already passed various laws confronting BDS, in many cases initiating economic penalties on organizations that boycott Israel or denying state funds to colleges and universities that allow BDS advocates to operate freely on campus. The pending federal legislation would go one step further by criminalizing any U.S. citizen “engaged in interstate or foreign commerce” who supports a boycott of Israel or who even goes about “requesting the furnishing of information” regarding it, with penalties enforced through amendments of two existing laws, the Export Administration Act of 1979 and the Export-Import Act of 1945, that include potential fines of between $250,000 and $1 million and up to 20 years in prison.

Interestingly, a number of churches, to include the Presbyterians, Mennonites, and United Church of Christ, have divested from companies participating in the occupation of the West Bank and could be subject to the punitive steps authorized by the legislation. And it also is interesting to note that the bills would not punish anyone who does not have a business relationship with Israel for reasons other than politics. The punishment comes solely when one states that he or she is not engaging in business with Israel due to objections regarding what Israel is doing to the Palestinians.

Daniel Larison has observed that even if one assumes that the legislation will face judicial hurdles and will never be enacted, it is nevertheless discouraging to consider that a clear majority of congressmen thinks it is perfectly acceptable to deny all Americans the right to free political expression in order to defend an internationally-acknowledged illegal occupation being carried out by a foreign country. That the occupation is illegal has even been acknowledged repeatedly by Washington, which contradicts its own policy with this legislation.

Those co-sponsoring the bills include Democrats, Republicans, progressives, and conservatives. Deference to Israeli interests is bipartisan and crosses ideological lines. Glenn Greenwald and Ryan Grim, writing at The Intercept, observe that “…the very mention of the word ‘Israel’ causes most members of both parties to quickly snap into line in a show of unanimity that would make the regime of North Korea blush with envy.”

The powerful international lobby for Israel

Finally, the seemingly unrelenting pressure to make criticism of Israel illegal is particularly dangerous as it is international. Indeed, it is a global phenomenon. Wherever one goes—Western Europe, Canada, Australia, New Zealand and the United States—there is a well-organized and funded lobby ready, willing, and able to go to war to protect Israel. In France it is illegal to wear a t-shirt supporting BDS or to demonstrate in favor of it. Britain has introduced laws that include defining criticism of Israel as anti-Semitism. In Canada, support of BDS has been regarded as a hate crime.

Will FARA registration of AIPAC as a foreign lobby fix all that? Of course not, but it would be a good first step. AIPAC would have to publicly acknowledge that it is acting on behalf of a foreign government and its sources of income would be subject to review. While the Congress is busy searching for Russian agents under FARA it just might spend some time also examining the pernicious influence of the unregistered and unrestrained Israel Lobby.

Philip Giraldi, a former CIA officer, is executive director of the Council for the National Interest.