You Are Here: Home → Mondoweiss: NYT, Reuters, Economist journalists self-censor on Israel so as not to be ‘savagely targeted’ — John Lyons

Mondoweiss: NYT, Reuters, Economist journalists self-censor on Israel so as not to be ‘savagely targeted’ — John Lyons 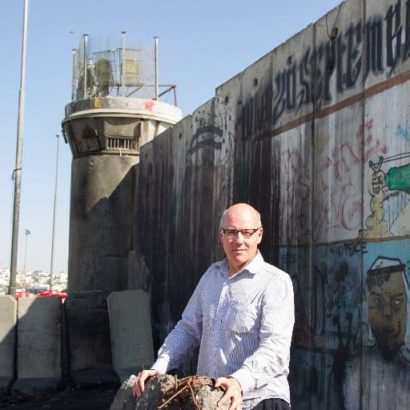 John Lyons inside the occupation, from his twitter feed

In the U.S. the Israel lobby is rarely mentioned critically in the mainstream media. But check out this segment on the political show Drum on Australia’s ABC two days ago: veteran Middle East correspondents Antony Loewenstein and John Lyons describe the relentless pressures from Israel and its lobby on journalists who are critical of Israel.

The show’s host Ellen Fanning notes that in Lyons’s new book (Balcony Over Jerusalem: A Middle East Memoir) he recalls sitting with a leading correspondent from Agence France-Presse and asking him How many foreign correspondents censor themselves? Lyons:

He replied, “Everybody,” and he’s one of the toughest bureau chiefs around. As part of the book I interviewed The New York Times, the Economist, Reuters, AFP, and I found a common trait. Reuters even has their own special words that we’re allowed to use that won’t upset the Israelis. And I went there with the view that I’d been in Washington and New York, I would report it as I saw it. But every time I would write about settlements, something that’s factual, you get targeted, as a journalist.

If you write the truth of what you see in front of you in Israel and the West Bank, you will be savagely targeted.

Lyons is a veteran journalist. He served as six years as Jerusalem correspondent for The Australian, and is now the paper’s associate editor.

Well I’ve written a chapter in the book called The lobby which is about the Australian lobby essentially, it looks at the various trips that all sorts of politicians and journalists and everybody takes. Relentless caravans coming through Jerusalem, that’s the subtle part of it…. But I can tell…from my own experience, inside The Australian, which is a very strongly pro-Israeli newspaper, but my editors, the pressures upon them, which they’ve talked about for the book– the pressure is, It’s made clear that they’re not happy with your performance, and the endless complaints–

I did a Four Corners report two years or three years ago. And then you’re tied up for months and months defending it. In the end we defended every claim… Before the Four Corners even went to air, one of the groups in Melbourne was circulating it, this is the complaint link, click on it, and file an automatic complaint to the ABC.

So the trips are the “subtle” part of it!

Here is that Four Corners report from 2014: it documents the fact that the Israeli army is targeting Palestinian boys for arrest and detention, and “threatening children with rape,” in an effort to make life in the West Bank intolerable for Palestinians. These practices have of course not ended. (And remember that on 60 Minutes five years ago, the late Bob Simon called out Michael Oren for calling higher-ups in an effort to interfere with his report on Christians leaving Palestine.)

Antony Loewenstein is also a veteran journalist. He has published several books on Palestine and other global issues and lately wrapped up a year and a half in Jerusalem. He says:

What about the Palestinian lobby? Fanning asks. Loewenstein:

There’s a lobby that exists, it is small but growing. It has influence but it’s relatively insignificant. That’s more just the nature I think of how political power works in this country.

Anyone who spends time in Israel or the West Bank or Gaza, which as John says has been occupied for 50 years … It’s now in my view permanent. We have to ask ourselves why so many people in the media and the political elites refuse to say the reality. Occupation that is permanent is something that is ugly…

There needs to be far more honesty with politicians here and journalists who don’t give in to Israel lobby bullying, which happens all the time.

Though Loewenstein later observes that public opinion has shifted dramatically, despite the vehemently pro Israel media.

The lobby has a right to exist. the point is that groups like AIJAC [Australia/Israel & Jewish Affairs Council] are so belligerent and far right, they are supporting Israeli government policies that are pro settlement, pro occupation, anti-Arab and deeply racist

The Israel lobby in Australia has already attacked Loewenstein for his comments on the show.

It goes without saying that the Israel lobby will continue to exercise outsize power so long as journalists and politicians refuse to speak about it openly. That’s not happening in the U.S.

(P.S. Here is Loewenstein’s latest, a report on how the 1967 war led to that “Permanent Occupation.”)

Thanks to Ofer Neiman.