You Are Here: Home → AIPAC called a ‘Hate Group,’ Should Register as a Foreign Agent

AIPAC called a ‘Hate Group,’ Should Register as a Foreign Agent 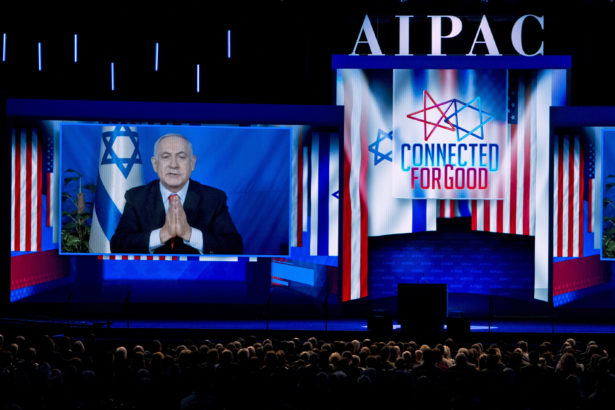 The powerful American Israel Public Affairs Committee (AIPAC) tried to convince Americans that a humanitarian Congress member, Betty McCollum of Minnesota, is ‘worse than ISIS’ because of her bill to protect Palestinian children. AIPAC officials have been investigated for espionage on behalf of Israel. It has long advocated for the Israeli government… Claims to represent all Jewish Americans but today represents only a tiny minority…

REP. BETTY MCCOLLUM (D-MN) called the American Israel Public Affairs Committee (AIPAC) a “hate group” after it placed ads on Facebook which implied that McCollum and other members of Congress who had defended the rights of Palestinians were worse than the terrorist group ISIS.

McCollum declared: “as a member of Congress and the vice-chair of the House Defense Appropriations Subcommittee, I believe defending human rights and freedom are foundational to international security and our democracy. The struggle to promote human dignity inevitably results in confronting entrenched forces determined to dehumanize, debase and demonize individuals or even entire populations to maintain dominance and an unjust status quo. Hate is used as a weapon to incite and silence dissent. Unfortunately, this is my experience with AIPAC.”

In explaining why he was not attending this year’s AIPAC conference, Sen. Bernie Sanders declared: “The Israeli people have the right to live in peace and security. So do the Palestinian people. I am concerned about the platform AIPAC provides for leaders who express bigotry and oppose basic Palestinian rights.”

In a column headlined, “AIPAC Makes Sanders’ Point for Him,” Washington Post columnist Dana Milbank writes: “AIPAC and Netanyahu seemed intent on proving Sanders’ point. As the conference opened…Netanyahu, speaking to the group via satellite…derided the Palestinians as ‘the pampered children of the international community.’ The AIPAC audience applauded….Netanyahu told AIPAC he was moving forward with plans to annex Palestinian territory—-a move that would make the long sought two-state solution all but impossible.”

In what many considered a direct effort to influence the American presidential election, Israel’s ambassador to the United Nations Danny Danon declared: “We don’t want Sanders at AIPAC. We don’t want him in Israel. Anyone who calls our prime minister a racist is either a liar, an ignorant fool, or both.”

In Milbank’s view, “AIPAC…finds itself not only at odds with Democrats, but also with most American Jews, instead of its tradition of representing strong, broad support for Israel, AIPAC is becoming about as bipartisan as the National Rifle Association. Even Netanyahu reportedly regards AIPAC as just another right-wing American interest group. ‘We don’t need AIPAC anymore,’ Netanyahu reportedly told one of his advisers. ‘We have enough support in the United States from the evangelicals. I’d happily give up on AIPAC if we didn’t need to counteract J Street,’ a liberal pro-Israel group.

Writing in The Forward, Batya Ungar-Sargon, in an article titled, “How AIPAC Proved Bernie Right,” notes, “I had never before been in the same room as a person who has defended genocide…until the AIPAC policy conference. Words like apartheid and genocide and ethnic cleansing are often thrown around in the context of the Israeli-Palestinian conflict… But it wasn’t a defender of Israeli war crimes, real or imagined, who was hosted by AIPAC. It was someone from a different context entirely.

“In July of 1995, 8,000 Muslims were murdered in Srebrenica in what the International Criminal Tribunal for the former Yugoslavia deemed a genocide. Under the command of Ratko Mladić, a Serbian paramilitary unit killed thousands and thousands…Aleksander Vučić was then serving as Minister of Information. He imposed fines for journalists who opposed the government and banned foreign TV networks. The Serbian media he oversaw was accused of justifying atrocities and demonizing ethnic minorities….Vučić has reinvented himself…and has been serving as president of Serbia since 2017…AIPAC welcomed the Serbian President to address its 18,000 delegates.”

Over the years there have been frequent calls for AIPAC to register as a foreign agent. In the 1970s, Sen. J. William Fulbright (D-AR), then chairman of the Senate Foreign Relations Committee, argued that this should be done, as have other U.S. foreign policy and intelligence analysts.

In April 2005, AIPAC policy director Steven Rosen and AIPAC senior Iran analyst Keith Weissman were fired from AIPAC amid an FBI investigation into whether they passed classified international security information to Israel. They were later indicted for illegally conspiring to gather and disclose classified information to Israel. AIPAC agreed to pay the legal fees for Weissman’s defense through appeal if necessary, but charges were ultimately dropped.

In May 2005, the Justice Department announced that Lawrence Franklin, a U.S. Air Force Reserve Colonel working as a Department of Defense analyst in the Pentagon, had been arrested and charged by the FBI with providing classified international defense information to Israel. The 6-count criminal complaint identified AIPAC by name. Franklin pleaded guilty to turning over classified material to both AIPAC and an Israeli government official. He was sentenced to almost three years in prison.

According to journalist Connie Bruck, AIPAC has been able to “deliver the support of Congress” to prevent any president who wants to negotiate with Israel from using the multi-billion dollar packages of military aid that go to Israel each year as leverage for passing the spending and taking away this strongest negotiating chit.

AIPAC has helped to make Israel the largest cumulative recipient of U.S. foreign assistance since the end of World War ll. It now receives more than $3.8 billion in aid yearly. As a result of AIPAC’s efforts, this aid includes numerous provisions that are not available to other American allies.

According to the Congressional Research Service, these provisions include providing aid “as all grant cash transfers, not designated for particular projects, and transferred as a lump sum in the first month of the fiscal year, instead of in installments. Israel is allowed to spend about a quarter of the military aid for the procurement in Israel of defense articles and services…rather than in the U.S.”

An important reason for AIPAC’s influence is that it markets itself as representing American Jewish opinion. In fact, most American Jews disagree with its embrace of total support for Israel as its governments steadily move away from democracy. A recent Pew Center poll showed that only 38 percent of American Jews believe that the Israeli government is seriously pursuing peace, while 44 percent believe that the continued construction of settlements in the occupied territories damages Israel’s national security.

Increasingly, young Jewish activists are separating themselves from AIPAC. In March the Washington Post reported, “…the activists represent a new generation of Israel critics that differs with the pro-peace movement of the 1990s.That earlier movement focused on a two-state solution to the Palestinian-Israeli conflict…The new groups are the product of the post-millennial liberal politics, with antipathy for nationalism of all kinds and a hunger to tear down the entire system of money in politics.”

Jeremy Ben-Ami, president of J Street, which formed in 2007 as a liberal but still pro-Zionist alternative to AIPAC, declares: “What we said was: ‘There’s another way to be pro-Israel, you don’t have to support whatever the Israeli government does.’” According to the Washington Post, “Younger groups are saying: ‘You don’t have to be pro-Israel, you should be pro-human rights, and everyone should have a state.’”

This year’s anti-AIPAC campaign was led by the Jewish group IfNotNow. A few days after members of IfNotNow videotaped themselves confronting former Vice President Joe Biden about AIPAC’s opposition to the 2015 U.S.-Iran nuclear deal, Biden said he would go to the conference “to convince them to change their position.” In the end, Biden sent a video message, telling delegates that Israel’s annexation plans and settlement activities were “choking hopes for peace.”

The idea that supporting the Israeli government’s policies is the way to attract Jewish voters has no basis in reality. J Street recently asked Jewish voters to name their two most important issues. Just 4 percent chose Israel. The same survey found that 65 percent said they were somewhat or very attached to Israel. The American Jewish Committee’s 2015 poll found a similar result.

The views of most American Jews were never represented by AIPAC and at the present time, AIPAC speaks only for a small minority, which embraces the occupation and the Israeli government itself. It may have become what many, such as Rep. McCollum, call it, “a hate group.” That it should register as a foreign agent of the government of Israel is increasingly clear. We should not permit it to pretend that it, in any way, speaks for millions of American Jews whose opinions are far different and who embrace human rights and equality for men and women of every nation and faith, in particular the Palestinians.

Allan C. Brownfeld is a syndicated columnist and associate editor of the Lincoln Review, a journal published by the Lincoln Institute for Research and Education, and editor of Issues, the quarterly journal of the American Council for Judaism.