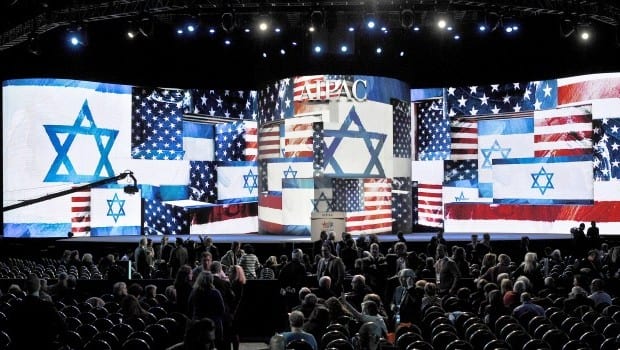 The American Israel Public Affairs Committee (AIPAC) … has done more than just tolerate the U.S. tilt toward extreme and often xenophobic views. Newly released tax filings show that the country’s biggest pro-Israel group financially contributed to the Center for Security Policy, the think-tank that played a pivotal role in engineering the Trump administration’s efforts to impose a ban on Muslim immigration.

In 2015, AIPAC launched a 501c4 advocacy group, Citizens for a Nuclear Free Iran (CFNI). Expected to spend $20 million in July and August 2015, the group was “formed with the sole mission of educating the public ‘about the dangers of the proposed Iran deal,’” spokesman Patrick Dorton told The New York Times. The Times reported that the $20 million budget would go to ad buys in as many as 40 states as well as other advocacy.

Shortly after the group launched, my colleague Ali Gharib and I noticed that the group’s website featured two items promoting an exiled, ex-terrorist Iranian opposition group, the Mojahedin-e Khalq(MEK). CFNI even used b-roll footage from a press conference held by the National Council of Resistance of Iran (NCRI), which the State Department deemed the MEK’s “political wing” (earning it a corresponding terrorist designation until the MEK was delisted as a terrorist organization in 2012).

After we reached out for comment, AIPAC’s anti-Iran deal advocacy group scrubbed their website of the MEK related materials, seemingly acknowledging a PR misstep. But the b-roll footage remained in their television commercials and on YouTube.

AIPAC’s flirtation with extreme groups appears to have gone even further than borrowing footage from the MEK.

The contact address for the contribution was a residential address in New Orleans belonging to Jewish Institute for National Security Affairs (JINSA) staffer Marsha Halteman. Halteman did not respond to questions about why her address appeared beneath the donation. 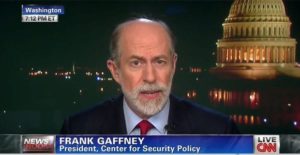 CSP is headed up by anti-Muslim conspiracy theorist Frank Gaffney who baselessly claimed that Hillary Clinton aid Huma Abedin, anti-tax activist Grover Norquist, and former George W. Bush appointee Suhail Khan were part of a Muslim Brotherhood plot to infiltrate the U.S. government. He also asserted that the Missile Defense Agency logo “appears ominously to reflect a morphing of the Islamic crescent and star with the Obama campaign logo” and helped launch an interfaith group to support Trump’s anti-Muslim agenda.

Gaffney and Trump aide Kellyanne Conway played a pivotal role in bringing about the administration’s efforts to ban immigration from seven (and now six) Muslim-majority countries.

In 2015, Gaffney commissioned Conway’s firm to produce a poll about Muslim attitudes. Released in June 2015, the poll found that 51 percent of Muslims agreed that “Muslims in America should have the choice to being governed according to Shariah,” among other findings. But the poll’s methodology was deeply flawed, relying on an opt-in online survey which industry experts consider unreliable. Conway’s own firm later admitted the data was not “statistically representative of the entire U.S. Muslim population.”

None of that stopped Trump from citing the poll as his justification for a “total and complete shutdown of Muslims entering the United States until our country’s representatives can figure out what is going on,” on December 7, 2015.

It’s possible that the funds went to support CSP’s advocacy opposing the Iran nuclear agreement. Nonetheless, AIPAC’s willingness to partner with an organization whose president, Frank Gaffney, was denounced by the Anti-Defamation League, the Southern Poverty Law Center and the American Conservative Union (which briefly banned him from their events after he accused political opponents of being part of a Muslim Brotherhood conspiracy) raises serious questions about AIPAC’s commitment to fighting bigotry, discrimination, and, in particular, Islamophobia.

Neither AIPAC nor CSP responded to requests for comment.

RELATED ARTICLE: Trump’s “Muslim ban”: Israeli strategic plans to “remake the Middle East” from 2001 and before targeted the same countries