You Are Here: Home → The Tablet reports that Trump’s approach to Iran, Syria, & Israel looks a lot like Obama’s, because the same people are implementing it

The Tablet reports that Trump’s approach to Iran, Syria, & Israel looks a lot like Obama’s, because the same people are implementing it 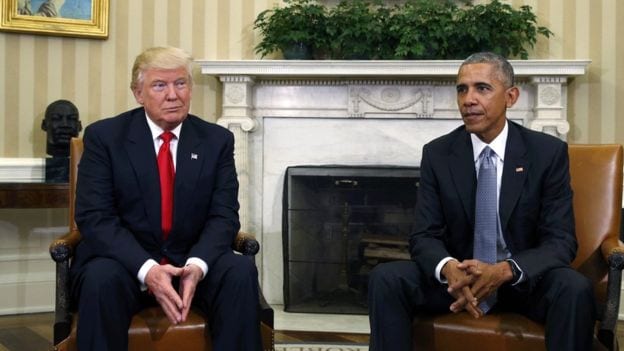 Lee Smith, writing in the pro-Israel publication Tablet, reports: “After excoriating Barack Obama’s foreign policy, including his realignment in the Middle East, Trump has yet to nominate any officials below the cabinet level at the State Department or the Pentagon, which means there is no one to formulate Trump’s own foreign policy, never mind implement it.”

Smith continues: “To fill the growing vacuum at the center of American power, the Trump White House is now handing over key foreign-policy positions to Obama administration re-treads who handled the very same portfolios under the previous president.”

According to Smith, “Obama people staff key positions… on Israel, Iran, ISIS, and Syria issues. Which makes sense, since the policies they are tasked with carrying out are so far exactly the same as they were under Obama.”

Smith is concerned that Yael Lempert, a National Security Council staffer from the Obama administration that the Trump team has kept on, is in Jerusalem this week with the White House’s special representative for international negotiations,  Jason Greenblatt.

According to Smith, a former Clinton official told him: “Lempert is considered one of the harshest critics of Israel on the foreign policy far left.” According to this official, Smith writes, Lempert allegedly  “helped manufacture crisis after crisis in a relentless effort to portray Israel negatively and diminish the breadth and depth of our alliance. Most Democrats in town know better than to let her manage Middle East affairs. It looks like the Trump administration has no idea who she is or how hostile she is to the U.S.-Israel relationship.'”

Smith is also concerned that Trump has not moved the U.S. embassy to Jerusalem despite Trump’s promises to Jewish donors and is disturbed that the Trump team has retained Brett McGurk, who, Smith writes, was Obama’s “point man” on his Iran policy.

Smith writes that the Iran Deal seems a “done deal” with Trump.

Smith reports that Trump  has also retained the Obama State Department’s special envoy to Syria, Michael Ratney, and that Ratney’s role has expanded to include Israel and Palestine issues.

“Trump’s promise to tear up the Iran Deal now looks like ridiculous bluster,” Smith writes. “As long as the people who had a professional and emotional stake in striking the deal are making policy—and thanks to the Trump team, they still are—the deal is safe.”

Smith reports: “The White House honestly appears to believe that it is being bedeviled by something like a ‘deep state,’ including the prestige media, sections of the intelligence community, and Obama sleeper cells, which is determined to sabotage a Trump presidency through underhanded means.”

In reality, he writes, “it’s just a few political operatives doing what political operatives, on the left or the right, have always done in Washington—wage political warfare against the other side with whatever it has. Of course, the Democrats are going to use anything they can to even the odds—street marches, the press, social media.”

Smith suggests: “Whoever put the kibosh on Anne Patterson at the Pentagon was probably also responsible for stopping Elliott Abrams’s nomination for the No. 2 post at the State Department. One theory holds that Trump special adviser Steve Bannon is pulling those strings.”

The full Tablet article is here.