You Are Here: Home → AIPAC is grooming high school students 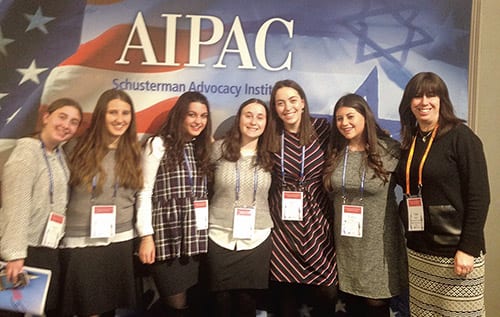 Washington D.C. was the site on October 29th – 31st for AIPAC’s annual matchmaking event, pairing up Israel and a fresh batch of American high school students.

The 2017 Schusterman High School Summit treated 400 high schoolers from all over the US to three days of training on AIPAC’s position on Iran, settlements, and other issues, plus kosher meals, fun activities, and a chance to lobby their congressmen. As an added bonus, students attended a college fair, in which they could see what pro-Israel kids do after high school, and talk to pro-Israel college students about pro-Israel universities.

[We] spent three days learning about Israel’s relationship with the US and how Israel needs people to stand up for it. [We] were given tools on how to stand against issues such as Hezbollah, Iran, and BDS…and why it’s important to stand up against hate.

Kineret wrote in an online journal about her experiences at the 2011 Schusterman High School Summit:

We learned that it is not as simple as “Arabs hate Israel,” but that there are many underlying problems that cause the uneasy relationships in the Middle East and around the world.

Kineret also described an afternoon of inspirational speakers – an African American, a Catholic young woman, a Muslim young man who got involved in Hillel during college, and a Hispanic non-Jewish young woman. Clearly, anyone can be passionate about Israel, and everyone is welcome to join the party.

Summit attendees are expected to go back home and be “effective pro-Israel political activists on and beyond their school campus.”

The American Israel Political Action Committee is one of the most powerful lobbies in Washington, and it’s not by accident. AIPAC is highly organized with deep pockets and a dedicated army of workers. The organization’s revenue in 2014 was over $77 million with almost 400 paid employees. (A “sister organization,” the American Israel Education Foundation – which sponsors educational, non-lobbying activities, including trips to Israel for congressmen, had revenue of over $55 million).

The largest conference of the year, the AIPAC Policy Conference, had about 20,000 attendees last year. Significantly, 4,000 of them were students.

AIPAC makes a great effort to identify, woo, and win young advocates for Israel. Each year, several events are organized for high school and college students. The events are smallish, with about 400 slots each, and publicized among Jewish day schools, synagogues, youth groups and student leadership organizations. Competition is fierce to prove who loves Israel the most even before the events begin: applicants are asked to list involvement in AIPAC activities; one expectation is that candidates be “devoted to AIPAC’s mission.”

Once students arrive at the conferences, their experience is immersive: they interact with AIPAC senior staff, meet with AIPAC leadership development professionals, study the AIPAC legislative agenda, and learn AIPAC lobbying techniques.

Retired Jewish journalist Henry Norr likens these events to “child abuse,” pointing out that AIPAC has never been about truth, justice, or real education, but only Israel’s to-do list. Norr further states, “I can only hope that these kids will realize that they’re being used and check other sources…if they want to learn the truth about Israel and the Palestinians.”

You Never Told Me, If Not Now, and Breaking the Silence are a few places where young people can get started on learning facts instead of propaganda. Other useful sites, from a more general perspective, are If Americans Knew, the Washington Report on Middle East Affairs, and The Link.