You Are Here: Home → As secy of state, Kerry blamed Israel for lack of peace with Palestine

As secy of state, Kerry blamed Israel for lack of peace with Palestine 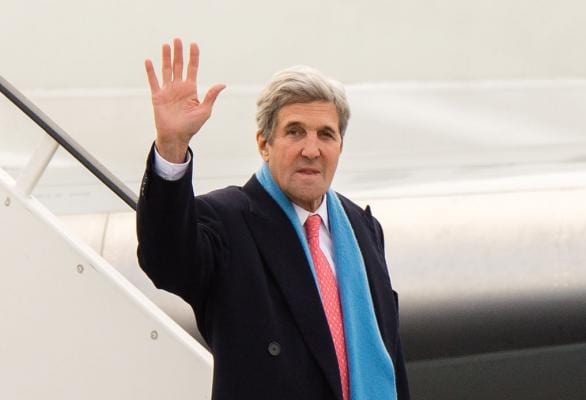 November 7th, Israel’s Channel 10 aired recordings of Kerry blaming Israel for the lack of peace between it and Palestine. (File Photo by Daniel Bockwoldt/EPA)

Israel’s Channel 10 published recordings Tuesday of former Secretary of State John Kerry blaming Israel for the lack of peace between it and Palestine.

The recordings are said to have been made during a conference in Dubai in 2016. Kerry is heard praising the Palestinian Authority for its commitment to nonviolence while the majority right-wing Israeli government refuses to engage in peace talks.

“The Palestinians have done an extraordinary job of remaining committed to nonviolence. And in fact when the [knife] intifada took place they delivered non-violence in the West Bank,” Kerry said, referring to a wave of violence in 2015 through 2016, in which mostly Palestinian suspects attacked Israelis with knives.

“This is overlooked by the general [Israeli] population because it is not a topic of discussion. Why? Because the majority of the cabinet currently in the current Israeli government has publicly declared they are not ever for a Palestinian state,” Kerry said, according to the Times of Israel.

Kerry also accused Israel of not allowing Palestinians to freely exercise their civil rights, which he said could backfire.

“If you see 40,000 kids marching up to the wall everyday with signs saying ‘give us our rights,’ I mean, I don’t think Palestine is going to be immune forever to the civil rights movements that have swept other nations in the world, and somehow, Israel is ignoring this today.” Kerry said, according to i24News.

He added: “If you don’t have leaders who don’t want to make peace, if the equation doesn’t change, I’ll be amazed if within the next 10 years if we don’t see some young [Palestinian] leader come along who says we have tried non-violence for the last 30 years and look, it hasn’t gotten us anything.”

In a response to Kerry’s remarks, the office for Israel Prime Minister Benjamin Netanyahu said Israel will continue its policy on Palestine, despite “those who tried to prod [Israel] to make dangerous concessions and failed.”