You Are Here: Home → Free Birthright Extension When You Volunteer with Extremist Rabbi 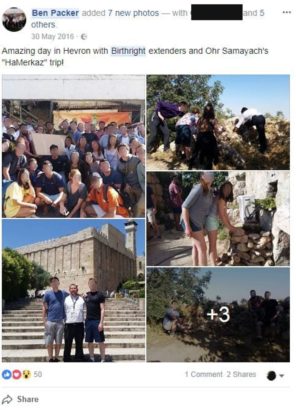 Hundreds, if not thousands, of young Americans have extended their Birthright visits to do “service projects” in settlements and outposts that are illegal even under Israeli law

A key trip provider for Birthright – the organization that offers young Jewish adults free visits to Israel – is promoting extension stays at a hostel in Jerusalem’s Old City run by an extremist rabbi aligned with radical factions of the settler movement.

Birthright participants, who receive free accommodations at the facility if they extend their stay in Israel beyond the standard 10-day trip, are encouraged by Ben Packer, the American-born rabbi who took over operations at the Heritage House a few years ago, to volunteer at illegal Israeli outposts in the West Bank. [All settlements are illegal under international law; these outposts are illegal even under Israeli law.]

Hundreds, if not thousands, of Birthright participants take advantage of the offer to stay at his hostel for free and participate in activities he promotes, according to sources with extensive knowledge of its operations.

The Israel Religious Action Center – a nonprofit group that fights racism in the country – recently sent the hostel a letter of complaint, accusing it of breaking the law for not accepting non-Jewish guests. It is illegal for businesses in Israel to discriminate on the basis of religion. Israel Free Spirit, a certified Birthright trip provider, advertises the Heritage House on its website as an option for participants seeking to extend their stay in Israel.

Run by the Orthodox Union in the United States, Israel Free Spirit is one of about a dozen certified trip providers for Birthright and has been serving the organization since it was founded in 1999. Israel Free Spirit has brought thousands of young Jews to Israel over the years, and is also connected to Aish Hatorah, a well-known Orthodox outreach movement.

Most of the participants on trips provided by Israel Free Spirit are not Orthodox, though. A newsletter published by the Orthodox Union boasts that it has the highest rate of “Birthright extenders” of any of the certified trip providers – 11 percent as compared with an average of 3 percent among the others. Among the short-term programs Israel Free Spirit promotes on its website as post-trip options is a weeklong program at the Heritage House.

The Heritage House website indicates that its program includes tours, seminars and volunteer opportunities. The “service projects” promoted by the hostel are undertaken exclusively in West Bank settlements and the Arab neighborhoods of East Jerusalem.

The Heritage House extension program is free, but according to Israel Free Spirit’s website, participants are only reimbursed for accommodation and for the costs of changing their flights out of the country “if they complete the week-long course.”

Among the recent “service projects” showcased on the Heritage House website are picking grapes at the illegal outposts of Pnei Kedem and Kida, planting olive groves in the illegal outpost of Esh Kodesh, digging drainage trenches and building foundations for homes in a new neighborhood of Kfar Tapuah – one of the most radical West Bank settlements – and helping Jewish families move into properties in the Muslim quarter of Jerusalem’s Old City.

There is no mention on the website of any volunteer opportunities within Israel’s internationally recognized borders.

It is very common for representatives of the Heritage House to solicit Birthright participants during their free 10-day trips to Israel while they are visiting Jerusalem. Representatives of the hostel can often be observed in the Old City’s Jewish Quarter and in the downtown Mahaneh Yehuda market distributing pamphlets that advertise free stays at the hostel. According to sources with extensive knowledge of the hostel’s operations, these representatives are instructed to approach participants while they are on break from their organized tours.

The Heritage House accommodates 30 guests. In a recent Land of Israel Network podcast interview, Packer said that over the past summer, during the height of the Birthright season, “We went for two weeks with people on the floor.”

The Heritage House website and Facebook page feature numerous photos and video clips of guests who have stayed there after their Birthright trips. A recent post, for example, features a “Birthright extender” being lauded for helping “redeem the Old City of Jerusalem within five minutes of his arrival at the House.”

On his personal Facebook page, Packer has posted photos celebrating Birthright alumni participating in Heritage House activities. One shows “Birthright extenders” planting a tree. Another shows them visiting Hebron, while yet another shows them planting fruit trees at Mitzpeh Dani, an illegal outpost.

Except on rare occasions, Birthright, as a matter of policy, does not bring participants on trips over the Green Line.

Based on some of the descriptions, the Heritage House appears to work closely with Ateret Cohanim, an organization that buys land in the Muslim Quarter of Jerusalem’s Old City and Arab East Jerusalem for creating a “Jewish presence” there.

In addition to Birthright participants on extension stays, the Heritage House also hosts lone soldiers – young Jews from overseas who come to Israel on their own to volunteer in the army. Only male guests are accepted at the facility run by Packer.

Another branch of the Heritage House, run by a different family, is located nearby and hosts only women.

The Heritage House was founded more than 30 years ago by Rabbi Meir Schuster, who died in 2014. Schuster had focused mainly on Orthodox outreach, also known as kiruv work.

Born and raised in Virginia, Packer did not grow up Orthodox. Before moving to Israel, he served as a rabbi at the University of North Carolina and Duke, where he befriended Stephen Miller, now a senior policy adviser to U.S. President Donald Trump.

Miller, considered a key architect of the Trump administration’s ban on Muslims, has denied reports that he is an old friend of white nationalist leader Richard Spencer, who also attended Duke. Packer recently wrote about his first encounter with Miller on the right-wing Israeli news site Arutz Sheva, where he blogs.

“Here I was sitting with a proud Jew with clearly endless leadership potential and he is telling me that he feels exiled from the organized Jewish community because of his conservative political beliefs,” Packer wrote. “I assured him that not only was nothing wrong with him, there were many Jews who agreed with him and would gladly welcome him.”

Miller was scheduled to participate in a Birthright trip the year they met, and Packer offered to take him around for additional sightseeing when it was over. “During those few days, we traveled to Hebron, visiting the Tomb of the Patriarchs and ventured in the ‘Muslim quarter’ of the Old City of Jerusalem to see the many reclaimed Jewish-owned properties,” Packer recounted on his blog.

Miller later wrote him that putting on phylacteries at the Tomb of the Patriarchs in Hebron was “one of the most spiritual experiences of my life.” Packer concluded his post by declaring Miller’s appointment to the White House  “spectacular news for the Jewish people.” “Stephen Miller is not just my friend,” he wrote, “he’s not just our friend. HE IS US! He is part of that new proud generation, no longer relegated to the fringe.”

A few months ago, Packer boasted in an interview about his knack for turning young left-wing Jews into settler sympathizers. “I think you’d be surprised, even shocked, at how people who describe themselves as leftists jump at opportunities to help in places like Hebron,” he said in a Land of Israel Network podcast.

“How could it be? Once they learn a little bit about the situation and they see what’s going on, they have an identity that they choose to maintain for maybe whatever reason, but when it comes to on-the-ground helping, numerous people ask, ‘Just do me a favor, no pictures, but I really want to help.’”

Following the evacuation of the illegal outpost of Amona earlier this year, Packer launched a vicious attack on the Israeli police, urging settlers to resist their orders in the future. “Following police orders is not a mitzvah and often is likely an aveirah,” – a sin, he wrote on his blog. “One doesn’t have to live in the Old City of Jerusalem (although it helps) to realize how terribly awful the Israeli police are. They are not all evil, but a lot of them are, and the leadership is even worse.”

In a recent talk delivered at the Aish Hatorah World Center in Jerusalem, Packer used the platform to attack the Israeli Supreme Court, which he described as a “mafia” and a “circus.” He had particularly harsh words for Justice Menachem Mazuz, a former attorney general.

“His grandpa’s a big rabbi, and he’s a disaster,” Packer told the audience. “Now the problem is he’s a little stupid. You can’t have everything. So he’s not very smart. But he’s Sephardi and he’s left-wing, so that trumps stupid. But he looks like an idiot often because he’s not in the same league. This guy happens not to be. But they needed him anyway to fill that demographic, which is not an easy one to fill.”

Contacted by Haaretz, Packer refused to answer any questions about his activities and views. “I don’t talk to your newspaper,” he said and hung up the phone.

Israel Free Spirit, like all other Birthright trip providers, is not authorized to speak with the press.

Gidi Mark, Birthright’s chief executive, said he was only “vaguely” familiar with the Heritage House but added: “I’m not responsible to our participants after they finish the 10 days. I really respect their free choice. These activities are not connected to Birthright, so I cannot decide what they do.”

Asked whether a certified Birthright trip provider should be promoting a facility run by someone with Packer’s views and agenda on its website, Mark responded: “We don’t sponsor programming of our own to the left, to the right, religious or non-religious, but I’ll look at it.”

The Israel Religious Action Center said that if it did not receive a quick response to its letter of complaint, it would sue the Heritage House for religious discrimination.