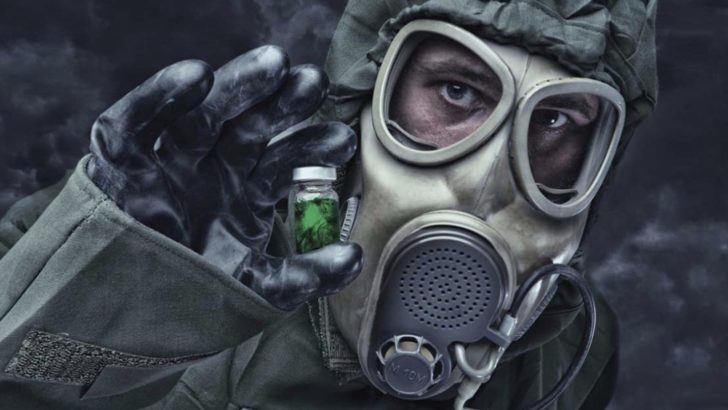 Israel has been carrying out biological warfare against Palestinians since at least 1948. (ECCI)

Israeli agents have not only poisoned people, Israeli researchers have now uncovered a systematic campaign by the nascent state of Israel to poison Palestinian wells and spread typhoid.

The Israeli security establishment has been trying to suppress the information…

On September 25, 1997, Mossad operatives from the special forces’ unit of Kidon (Hebrew for Bayonet) poisoned Khaled Meshal, the chairman of the political bureau of Hamas, in Amman, Jordan. One of the operatives held a small tube and sprayed Meshal’s ear with the material.

The Mossad modus operandi is to send one of its doctors into the arena of operation in case an operative is injured and needs medical treatment, without risking exposure at a local hospital. A female doctor, accompanied by Mishka Ben David, one of Mossad intelligence officers, was chosen for the mission in Jordan.

They posed as an Israeli couple on vacation in an Amman hotel. The doctor and Ben David possessed an antidote, which would neutralize the poison if it leaked and injured the operatives by mistake. Israel kept a backup antidote at another location in Amman.

The mission failed. Prime Minister Benjamin Netanyahu showed negligence and arrogance in executing an operation on Jordanian soil, Israel’s most strategic ally in the Middle East.

Just three years earlier, Jordan had signed a peace treaty with the Jewish state. However, the intelligence was also poor and the performance by the operatives in the field was inadequate. Mossad operatives holding falsified Canadian passports were arrested. Four others found shelter at the Israeli embassy.

Jordan’s King Hussein threatened to storm the embassy and to execute the operatives. To placate the king, Israel agreed to release from prison Sheikh Ahmed Yassin, the founder and spiritual leader of Hamas, and to save Meshal’s life.

The doctor and Ben David gave one of the antidotes to a Jordanian intelligence officer, who forwarded it to a Jordanian doctor. Israel saved the life of Meshal, a bitter enemy of Israel until today.

On top of these self-inflicted wounds to Israel’s own national interests, one of the most troubling ramifications was the fact that the Meshal affair forced Israel to publicly admit that it had used poison – a form of biological warfare by at least one measure.

Until then, the reports about the use of poison by Israeli intelligence agents were always attributed to “foreign sources.”

At least two other incidents of this nature were revealed in the world press. One was in 1978 after the death of Wadie Haddad, the operational officer of the Popular Front for Liberation of Palestine.

Haddad was the architect of the spectacular hijacking of Israeli and international airliners in the 1970’s, including the Air France flight diverted to Entebbe, Uganda, in 1976. In a daring operation, Israeli commandos killed Haddad’s terrorists, who included German members of the Bader Meinhof gang, and saved most of the hostages.

The Mossad retaliated. Knowing that Haddad had a sweet tooth, it recruited one of his aides to be a spy. As instructed by Mossad handlers, the aide purchased English-made Cadbury Chocolate in Belgium. The chocolate was filled with poison prepared by Israeli scientists for the Mossad.

The Palestinian aide personally delivered it to Haddad, who ate it without sharing. Haddad, who had suffered from severe underlying illnesses, died a few weeks later in an East Berlin hospital. Until today, Mossad veterans debate whether Haddad died of the poison or due to his sickness, or because of the combination of the two factors.

Thirteen years after the failed assassination attempt against Meshal, the Mossad struck again. In 2010, Mossad agents poisoned Mahmoud Mabhouh, a senior Hamas operative who liaised with Iran to smuggle weapons to Gaza, in his Dubai hotel room.

Mabhouh died, and all members of the hit team returned safely to Israel. But the Dubai police managed to reconstruct the operation, revealing that the Mossad had used forged Western passports. The Mossad suffered a blow to its prestige and omnipotent image, and the affair damaged Israel’s foreign relations.

The 1925 Geneva Protocol forbids the use of biological weapons. Fifty years later another international agreement was signed: The Convention on the Prohibition of the Development, Production and Stockpiling of Bacteriological (Biological) and Toxin Weapons and on their Destruction, commonly referred to as the Biological Weapons Convention.

However, while 183 states have ratified the treaty, Israel, together with Egypt, Somalia, Eritrea and Comoros, have refused to join it.

It is widely assumed and reported that the various poisoning materials used by the Mossad for the already published cases, and few more which have remained secret, were manufactured at the Israel Institute for Biological Research in Nes Ziona, 20 kilometers south of Tel Aviv.

The institute, which jointly belongs to the Prime Minister’s Office and the Defense Ministry, was founded in 1952, replacing the army’s Scientific Corps. Its first director was Alexander Keynan.

This unit now stars in a fascinating article revealing the clandestine history of the biological warfare that Israel conducted during its War of Independence in 1948.

The article – “‘Cast Thy Bread’: Israeli Biological Warfare during the 1948 War” – was recently published by Middle Eastern Studies.

This article is a rarity for two reasons. First, it was researched and published against the wishes of the Israeli security establishment, which has tried for years to block any embarrassing historical documents about that war exposing war crimes against Arabs, like murdering prisoners, ethnic cleansing and destroying villages.

Second, the article is based on original documents stored in the Israel State Archive and other archives.

Morris and Kedar had already discovered that the codename for the operation was “Cast Thy Bread” – taken from a verse in the Book of Ecclesiastes (11:1).

Based on their research, they detail how scientists from the Scientific Corps, together with battlefield units, were involved in a systematic campaign to poison water wells and spread typhoid bacteria in Arab villages and cities as well as among the invading armies of Egypt and Jordan.

The purpose was to frighten the Arab-Palestinian population, to force them to leave and to weaken the Arab armies.

The order to use the biological warfare was given or at least approved by the founder of the Jewish state, David Ben-Gurion, who was its first prime minister and defense minister.

Ben-Gurion consulted with the top scientists at the time including Prof. David Erenst Bergman, who is consider the father of the Israeli nuclear program, Prof. Ephrain Katzir, a future president of the state, and Prof. Alex Keynan, the founder of the biological research institute.

The top military echelon privy to the clandestine operation included generals Yohanan Ratner and Yigal Yadin, who was the de facto chief of staff during the 1948 war and then-Lt. Col. Moshe Dayan. Dayan, a future chief of staff and foreign minister, was given by the scientists tubes with typhoid bacteria. His assignment was to deliver them to his subordinates.

The instruction was to spread it in water wells near Jericho, where the Jordanian army was deployed, and in Jerusalem area villages where the most fierce battles took place.

However, one of Dayan’s tubes broke, and his 3-year-old son Assi (a future writer, actor and film director) was infected and had to stay in bed for days.

Typhoid germs were also sent in bottles to the southern front. But local left-leaning commanders refused to participate in the operations.

They complained to their senior commander Haim Bar-Lev, also a future chief of staff and cabinet minister. Bar-Lev told them to get rid of the bottles.

Nevertheless, a few Israeli troops thought the bottles contained soft drinks and drank them. Luckily, they were not seriously ill.

The article by Morris and Kedar also sheds light on a few more cases in which Israeli soldiers were sent with the poison to Acre and the Galilee village of Ilabun.

According to British Arab and Red Cross documents, dozens of local residents of Acre were poisoned and became severely ill. An unknown number of them died.

The same method was also used in May 1948, a week after Israel proclaimed independence, in Gaza. Two Jewish soldiers from a special forces unit posed as Arabs and infiltrated Gaza with tubes containing the typhoid germs.

Their mission was to poison the Gaza water well in order to stop the advancement of the Egyptian army. But they were arrested, tortured and sentenced in August 1948 to death by an Egyptian military court.

Israel has never admitted the true nature of their mission but recognized them as fallen soldiers. The article does not specify what was the actual number of casualties caused by these biological warfare operations. It probably was not significant and was not widespread due to the amateurish nature of the operation Cast Thy Bread and the logistical difficulties.

Yet, it’s no wonder that the Israeli security establishment is ashamed of some chapters of its past and has been trying to suppress the information.