You Are Here: Home → 2022: 12 months of Israeli violence against Palestinians

2022: 12 months of Israeli violence against Palestinians 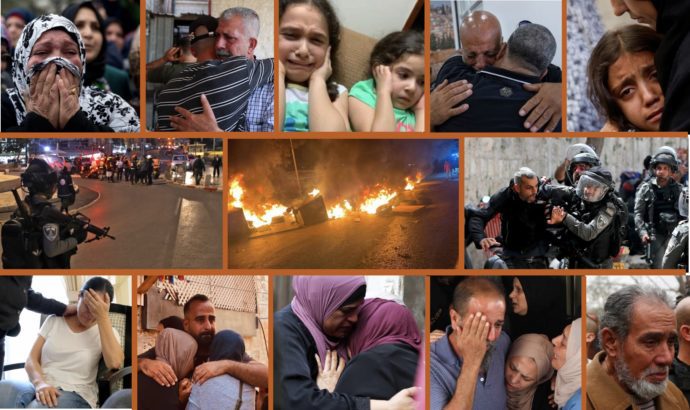 2022 was a year of ongoing horror for Palestinians at the hands of Israel. (IAK)

If Americans Knew posted or reposted roughly 250 articles in 2022, covering the situation in Israel-Palestine and news relevant to the region. Some of the major events included Israel’s August attack on Gaza and the murder of beloved Palestinian-American TV journalist Shireen Abu Akleh in May.

No one knows better than Palestinians themselves that, in between these major stories, Israeli oppression has been ongoing and crushing.

Headlines are terse and soulless, and data are impersonal, but they can give us some insight into the magnitude of Palestinian hardship – the experiences of families that have lived through several generations of grave injustice. For example:

Perhaps the most iconic and horrific tragedies of the year were the deaths of Rayan Suleiman and Shireen Abu Akleh.

Theirs are not just heartbreaking stories in themselves. They also speak volumes about the ruthlessness of Israel’s oppression.

Shireen Abu Akleh, a beloved Palestinian-American TV journalist, was murdered by an Israeli sniper’s bullet on May 11th. US mainstream media failed to cover the incident accurately, and Israel partisans continue to perpetuate lies.

Israel stubbornly refused to acknowledge its guilt long after it was implicated through investigations by the New York Times  CNN, the Washington Post, the United Nations, Israeli human rights organization B’Tselem, and the Dutch-based Bellingcat research group. Israeli leaders refused even the mildest scolding by the US.

Rayan Suleiman was just 7 years old when Israeli soldiers chased him home from school and threatened him. The little boy was so terrified that, according to the coroner, he had a heart attack and died on the spot. Rayan had experienced ongoing trauma all his short life, living as he did under brutal and invasive occupation. Israel declared itself innocent of his death.

Below are several categories of stories we brought you in 2022 – stories that all Americans should read.

In the past, when Israel has initiated attacks on Gaza, it has been in “retaliation” for rockets from Gaza “raining down on Israeli civilians” – rockets that rarely cause casualties. Israel’s August attack, however was preemptive, allegedly based on speculation that a resistance group in Gaza was planning an attack. No evidence was presented, but Israel’s 3-day assault left 49 Palestinians dead, including 17 children. No Israelis died.

Mainstream media failed to present these facts, but If Americans Knew brought regular updates, for example:

THE SITUATION IN GAZA

In addition to Israel’s attack on Gaza, its crushing blockade on the innocent men, women and children of Gaza is now in its 15th year. Here are a few of the reports we posted on this tiny sliver of land that has been called “the world’s largest open-air prison” (for background, watch this video):

In 2022, If Americans Knew produced a full-length documentary film called “Justice For Liberty,” telling the carefully concealed story of the day in 1967 when Israel bombed a US warship, killing 34 Americans and injuring another 174. The cover-up of this incident by the American government and media, and many other organizations (and Israel) has been disgraceful. IAK is proud to have helped call attention to the issue in 2022:

Since 1967, Israel has imprisoned more than 700,000 Palestinians from the occupied territories (West Bank, Gaza, and East Jerusalem).

2022 was a harsh year for Palestinian prisoners. If Americans Knew brought you these and other important stories:

The Israeli military killed at least 36 Palestinian children in 2022, a frightening number of them shot in the head or chest.

On a smaller scale, but more widespread, are the daily indignities that Palestinian children must endure, simply because Israel is allowed to get away with it.

Here are just some of the headlines IAK posted this year, calling attention to the slaughter and abuse of Palestine’s innocents:

2022 was a particularly gruesome year for Israeli settler violence against Palestinians. In many cases, Israeli forces, as usual, either stood by or even assisted the settlers in their attacks.

It is generally accepted that settler violence is an integral, if informal, component of Israel’s effort to ethnically cleanse Palestinians from parts of the occupied territories.

Here are a few 2022 posts from If Americans Knew about settler violence:

When the Russia-Ukraine war erupted, advocates of justice for Palestinians saw the similarities – but mainstream media missed it.

Israel has fought to discredit and/or silence truth-tellers for decades. 2021 saw the start of a particularly vicious attack on 6 well-known Palestinian human rights organizations – and in 2022, the attack has continued.

Israel is also scrambling to demonize yet more organizations that are exposing its secrets. Amnesty International and the UN Special Rapporteur on Palestine issued reports in early 2022 declaring Israel an apartheid state – following in the footsteps of  Human Rights Watch and the Israeli human rights groups B’Tselem, and Yesh Din.

Israel has also been harassing or imprisoning individual activists.

Not only do Israel’s military and police use lethal force as a first resort, they also have the admiration and support of their government in doing so.

Here are some of the too-many stories you heard here in 2022:

CORPORATE AMERICA, MAINSTREAM MEDIA, AND SOCIAL MEDIA SIDE WITH ISRAEL

Not always, but all too often, Israel partisans in the US pull strings to perpetuate Israel’s innocence myth in various arenas. (IAK has reported for years about mainstream media’s pro-Israel bias – see this and this and this, for example).

Here are a handful of the many stories If Americans Knew has shared with you this year on this issue:

US GOVERNMENT’S WAR ON JUSTICE AND PEACE FOR PALESTINIANS

It’s bad enough to know Palestinians are enduring all this oppression from Israel – but the horror reaches a whole new level when we remember that our government is bankrolling these atrocities – over $10 million every day. Our Congress members are actively supporting this regime using our tax dollars. (And we typically expend an additional $10 million per day on projects because they benefit Israel.)

Here are just a few of the many ways our government has been enabling Israeli human rights abuses this year:

Israel couldn’t get away with murder like it does, without the help of its team of devotees. They don’t just solicit money – they influence foreign policy, trample on Americans’ right to free speech, and dictate politicians’ responses to Palestinian suffering. How do they do it? Simple: nobody is holding them accountable.

A few of the many achievements by friends of apartheid Israel:

The stories, sadly, never seem to end – although we at If Americans Knew dream of the day when a just peace comes to the region.

Here is a sampling of the various other issues that we addressed in 2022:

PALESTINIAN RESISTANCE IN NABLUS AND JENIN

Palestinians are not without agency. 2022 witnessed a huge number of weekly protests throughout the West Bank. Resistance against occupation is legal – even armed resistance is compatible with international law, though the vast majority of Palestinian resistance is unarmed.

Palestinian resistance has been organizing against Israel’s ongoing occupation (illegal), especially in Jenin and Nablus. Israel considers these resistors “terrorists,” and went all out in 2022 to break up these groups. 57 Palestinians were killed in raids on Jenin alone.

Below is a smattering of the articles IAK presented on the almost nightly invasions:

AMERICAN AND GLOBAL ALLIES OF JUSTICE FOR PALESTINIANS

Worldwide, there is a large contingency of Palestinian rights supporters. They have yet to gain the upper hand over Israel’s propaganda machine, but 2022 was a year of progress.

Here are a few stories of advocacy that If Americans Knew brought you this year:

It’s clear to see that Israel and its allies are determined to keep a boot on Palestinians’ necks – but times are changing.

More than ever before, “apartheid” has become a common term to describe the situation. Americans’ love affair with Israel is declining.

But we know the pattern: when the Palestinian narrative begins to find acceptance, Israel doubles down on its efforts to silence the truth-tellers.

Bottom line: If Americans Knew is committed to providing Americans facts on this crucial issue that mainstream media omit. We hope you will join us. Please share our posts, talk about the Palestinian situation, contact your Congress members, and support us financially if you possibly can.

LAST YEAR’S WRAP-UP: A chronicle of Israeli actions against Palestinians in 2021