You Are Here: Home → Israel’s new radical government shows itself reckless and racist 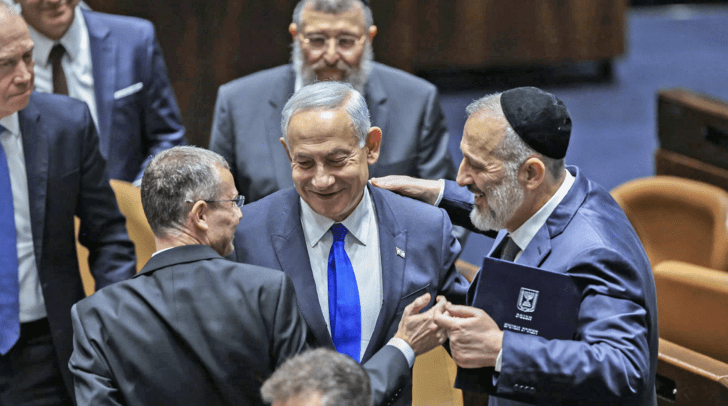 Benjamin Netanyahu, center, with Aryeh Deri, right, and other lawmakers at a plenum session on forming the new government, in the Israeli parliament in Jerusalem, Dec. 29, 2022 (photo)

The new Israeli government, ostensibly under the leadership of PM Benjamin Netanyahu, is off to a spirited start – but the minister of national security, Itamar Ben Gvir, is directing the course of the administration even farther toward extremist positions than it has been during Netanyahu’s previous 15+ years at the helm.

Whoever is in charge, changes are happening at a dizzying pace, and tens of thousands of Israelis are deeply critical of the direction the country is taking. Palestinians and advocates for justice for Palestinians are profoundly concerned about what this government has in store.

Below are excerpts of reports from various news outlets, describing just a few recent developments.

A member of Israel’s government said he prefers “Jewish murderers over Arab murderers” during a heated parliamentary committee meeting, in the latest example of Benjamin Netanyahu’s new administration veering to the racist far right.

“I do not feel any need to justify myself for the fact that I, in the Jewish state, prefer Jews. Yes, [Palestinian member of parliament] Ahmad Tibi, I prefer Jewish murderers over Arab murderers,” Milwidsky retorted.

[Tibi, a physician, has often spoken out against Israeli extremists; some years ago he opposed a political leader who said “the Christians are bloodsucking vampires that must be expelled.”]

Members of the far-right Religious Zionism alliance, a key part of the new government, supported Milwidsky. MP Limor Son Har-Melech of the Jewish Power party told Ynet radio: “A Jew who kills an Arab needs to sit in prison until the end of his life. An Arab who kills a Jew needs to die.” […]

Benjamin Netanyahu’s new government has moved quickly against the Palestinians in retaliation for a Palestinian push for the UN’s highest judicial body to give its opinion on Israel’s 55-year military occupation of the West Bank.

It has withheld nearly $40m (£32.9m) in Palestinian tax revenues and said it would transfer the money to victims of Palestinian militant attacks, stripped Palestinian officials of VIP privileges and even broke up a meeting of Palestinian parents discussing their children’s education, claiming it was unlawfully funded by the Palestinian Authority.

The Palestinian foreign minister says Israel has revoked his travel permit, part of a series of punitive steps against the Palestinians that Israel’s new hardline government announced days ago.

A spokesperson for Israel’s defense ministry confirmed the move to the Reuters news agency, calling it part of the implementation of a government decision taken on Friday to penalize the Palestinians for pushing the United Nations’ highest judicial body to give its opinion on the Israeli occupation.

On Saturday, Israel said it had revoked entry permits for three senior officials from Palestinian President Mahmoud Abbas’s Fatah party after they visited a Palestinian citizen of Israel recently released from prison. […]

Police broke up an East Jerusalem parent-teacher association meeting in the neighborhood of Isawiyah on Saturday, saying the gathering was funded by the Palestinian Authority, while the chairman of the association said it had no relation to the PA at all.

The meeting was called over staff shortages at schools.

“We held a meeting with the parents’ forum and police arrived and showed us a warrant from [National Security Minister] Itamar Ben-Gvir and told us the meeting was illegal because it was connected to the Palestinian Authority,” Faiz said.

Ben-Gvir said in a statement: “It’s time to stop the Palestinian Authority’s party in Jerusalem, and not to allow the authority’s people to hold terrorist summits in Jerusalem.” […]

Israel’s right-wing government says it has approved a series of punitive measures in response to a Palestinian bid to push the International Court of Justice to give its opinion on the decades-old occupation.

The measures announced by Prime Minister Benjamin Netanyahu’s right-wing security cabinet on Friday include using Palestinian money to compensate the families of Israeli settlers and soldiers who were attacked by Palestinians, and imposing a moratorium on Palestinian construction in some areas of the Israeli-occupied West Bank.

Netanyahu’s office said the measures were a “response to the Palestinian Authority’s decision to wage political and legal war against the State of Israel”. […]

On Twitter, Itamar Ben-Gvir said he is proceeding with a plan to adopt a law to impose the death penalty on prisoners accused of killing or attempting to kill Israelis. […]

“I came to Nafha Prison yesterday to ensure that the murderers of Jews are not getting better conditions as a result of the construction of new cells, and I was glad to see that the Israel Prison Service does not intend to improve their holding conditions,” the far-right politician now in charge of police and the prison service said in a statement. […]

Benjamin Netanyahu’s justice minister has unveiled the new government’s long-promised overhaul of the judicial system that aims to weaken the supreme court.

Critics say the plan will undermine Israel’s democracy by giving absolute power to the most rightwing coalition in the country’s history.

He proposed a series of changes aimed at curbing the powers of the judiciary, including allowing lawmakers to pass laws that the high court has struck down and in effect deemed unconstitutional.

Levin laid out a law that would empower the country’s 120-seat Knesset to override supreme court decisions with a simple majority of 61 votes. […]

Is Ben Gvir preparing a holy war against the Palestinians?

On Tuesday, days after Prime Minister Benjamin Netanyahu’s government was sworn in, the ultra-nationalist politician marched straight in to the Al-Aqsa Mosque complex in the occupied Old City of Jerusalem – probably the most incendiary site in the Middle East.

Ben-Gvir did so despite reports that he had agreed with Netanyahu to delay such a visit for fear of the potentially explosive consequences.

The precedent he was drawing on was the visit to Al-Aqsa in September 2000 of then-opposition leader Ariel Sharon backed by 1,000 members of Israel’s security forces, over the opposition of the Jerusalem police.

Sharon rode the wave of Jewish nationalism he unleashed right into the prime minister’s office. The Israeli public wanted an uncompromising general and Jewish patriot to pound the Palestinian people into submission. […]

Israel’s Civil Administration has just informed Palestinian officials that over 1,000 Palestinian residents of 14 villages in Masafer Yatta, South Hebron Hills will be forcibly expelled from their homes in the near future.

According to the notice given to the residents, the decision on the deportation comes from the highest levels.

This ultranationalist government was sworn in just last Thursday. So it took them all of five days to order the forced expulsion of Palestinians.

The area is being evacuated to make way for a military training zone, Firing Zone 918 – although there is ample evidence of continuous presence of Palestinians in the area, many of them since well before the State of Israel was even founded.

Israel’s Supreme Court ruled last year – after 20 years of legal battles – that the Palestinian residents are ‘illegal invaders’ and threw out their petition, paving the way for the expulsion.

The claim that the Palestinian residents are ‘invaders’ is particularly egregious considering the archival evidence uncovered by עקבות Akevot showing that the firing zone was established for the very purpose of preventing Palestinians from living there.

Benjamin Netanyahu’s new incoming hard-line Israeli government put West Bank settlement expansion at the top of its priority list on Wednesday, vowing to legalize dozens of illegally built outposts and annex the occupied territory as part of its coalition deal with ultranationalist allies.

The coalition agreements, released a day before the government is to be sworn into office, also included language endorsing discrimination against LGBTQ people on religious grounds, contentious judicial reforms, as well as generous stipends for ultra-Orthodox men who prefer to study instead of work.

The package laid the groundwork for what is expected to be a stormy beginning for the country’s most religious and right-wing government in history, potentially putting it at odds with large parts of the Israeli public, rankling Israel’s closest allies and escalating tensions with the Palestinians. [...]

OTHER RECENT NEWS FROM ISRAEL/PALESTINE: