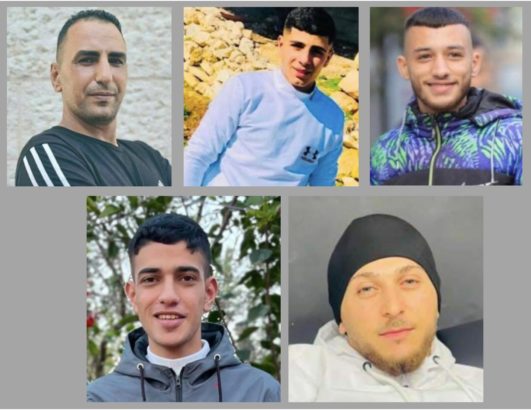 On Wednesday and Thursday Israeli troops invading Palestinian towns killed three teens, a 25-year-old, and a father trying to defend his son… As the father tried to see what was going on, an Israeli sniper shot him…

This brings the number of Palestinians killed by Israeli army fire in the first twelve days of 2023 to nine.

The latest Israeli killing spree began at dawn on Wednesday, when Israeli soldiers began invading and violently searching dozens of homes across the occupied West Bank, abducting and shooting people.

One of those shot by invading soldiers was a young member of the Palestinian resistance, Ahmad Amer Abu Jneid, 21, from the Balata refugee camp near Jenin. He died the next day from a soldier’s bullet in the head.

Also shot to death on Wednesday was Sanad Mohammad Othman Samarma, 19, from the Ath-Thaheriyya town, south of Hebron. Palestinian medics reportedly rushed to the scene, but Israeli soldiers refused to allow them to approach the teen to provide essential first aid.

Samamra’s family said he had nothing to do with the stabbing and added that he was herding the family’s sheep on lands in the Shweiki area, east of the town, when the soldiers shot him.

Hours after the teen’s death, dozens of Israeli soldiers invaded the Ath-Thaheriyya town, then stormed and ransacked his family’s home, causing excessive damage.

The next death came at dawn on Thursday. Israeli soldiers invaded the Qalandia refugee camp north of Jerusalem, abducted fifteen young men, and shot Samir Awni Harbi Aslan, 41, in the chest, killing him. Again, Israeli soldiers prevented Palestinian medics from reaching the victim to administer first aid and move him to a hospital.

According to eyewitnesses, the soldiers shot Aslan when he tried to defend his son, whom the soldiers repeatedly assaulted while trying to abduct him.

“Baba (Dad) help me,” shouted Ramzi, 17, calling on his father, Samir Aslan, to save him from the Israeli occupation soldiers who broke into his home in Qalandia refugee camp at dawn this morning and arrested him.

At his son’s call, Samir, 41, rushed out of his apartment on the third floor of their four-story building. When he reached the entrance of the building, the soldiers aimed their guns at him and prevented him from coming out, forcing him to return to his home.

Samir could not bear the sight of his eldest son being arrested and handcuffed, knowing very well how brutal and barbaric the soldiers could be. But when he couldn’t see his son, he went to the roof of his building to watch what the soldiers were doing with his son.

But as soon as he went up a wooden ladder placed on a wall on the roof, a sniper stationed in another building located directly behind his house shot him.

Aslan’s wife called an ambulance, but the army initially prevented medics from reaching the house. As Aslan was bleeding, his family dragged his body down the stairs and called for help. An ambulance picked him up some 20 minutes later.

The next to die on Thursday was Habib Mohammad Ikmail, 25, shot in the head by Israeli soldiers invading Qabatiya, near Jenin.

A heavy exchange of gunfire was reported during the raid leading to five injuries among the Palestinians from Israeli army gunfire.

The next to die was Abdul Hadi Fakhri Nazzal, 18, from the town of Qabatiya, near the northern West Bank city of Jenin, who was earlier shot in the chest and neck by Israeli soldiers.

During the invasion, Israeli soldiers shot at least three other Palestinians who were rushed to a few hospitals in Jenin.

This bring the number of Palestinians killed by Israeli army fire in the first twelve days of this year to nine, including two minors. (The last Israeli to be killed was on Nov. 23, 2022.)

NOTE: The entire West Bank has been under Israeli occupation since 1967; all its official entrances and exits are controlled by Israeli soldiers, making its Palestinian inhabitants virtual prisoners. Many are families that were ethnically cleansed from Israel during Israel’s founding war (see this and this and this). Israeli forces often invade the territory, frequently beating and shooting people; one example is here.