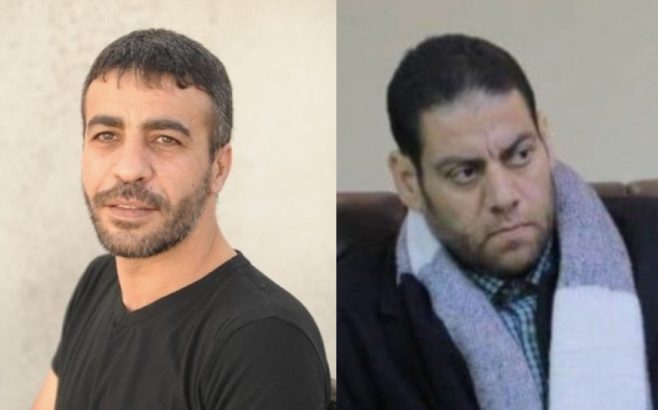 Israel notoriously blocks Palestinian patients, especially in Gaza and in Israeli prisons, from obtaining permission to travel for medical care. Ten have died in 2022.

The Committee said Nasser Mohammad Abu Hmeid, 50, from the Al-Am’ari refugee camp near the central West Bank city of Ramallah, was moved from the Ramla prison clinic to Assaf Harofeh Israeli medical center after suffering serious complications and died at the hospital.

Abu Hmeid’s condition started declining in August of last year, 2021, when he complained of pain in the chest and was diagnosed with lung cancer.

Israeli surgeons removed about 100 centimeters from the area of his tumor and moved him back to Asqalan prison despite his urgent need for chemotherapy and other treatment.

He was left without treatment for some time before the doctors decided he urgently needed chemotherapy and other treatment, but the prison authority kept delaying his transfer to a hospital and denied him the potentially life-saving treatment.

Just recently, Nasser was able to undergo more chemotherapy treatment, but his cancer has already spread and become terminal.

Over the past several months, many human rights and legal groups filed appeals with Israeli courts demanding Nasser’s release to receive treatment at a Palestinian medical center close to his family, but Israel denied all appeals.

Nasser was serving seven life terms and additional fifty years in prison; he was abducted for the first time in the year 1987 and was imprisoned for four months; he was abducted again and sentenced to two and a half years.

He was abducted for the third time in 1990 and was sentenced to life in prison, but was released as part of direct Palestinian-Israeli talks; however, not long after, the army abducted him before he was sentenced to several life terms.

The Abu Hmeid family home was demolished by Israel five times, and his mother was barred from visiting her imprisoned sons, especially Nasser, for several years; their father also died without seeing his sons.

It is worth mentioning that Nasser was born in 1972 in the Nusseirat refugee camp in the central Gaza Strip before his family moved to the West Bank.

Nasser’s death brings the number of detainees who died in Israeli prisons since Israeli occupied the West Bank, the Gaza Strip, and East Jerusalem in the year 1967 to 233.

Seventy-four of the deceased detainees died due to medical neglect after Israel denied them the right to adequate and professional medical attention; one of them, Sa’diyya Farajallah, 68, had diabetes and high blood pressure, diabetes, a heart condition, and various chronic illnesses, and was taking various medications before she was taken prisoner and was denied the right to medical treatment.

Israel holds at least 4700 Palestinians captive, including 150 children and 33 women. About 600 detainees are sick, including 24 who suffer from cancers and tumors of various degrees.

Al-Mezan Center For Human Rights: The discriminatory movement restrictions and the arbitrary permit regime imposed by Israeli authorities on Palestinian patients from Gaza, which obstruct their access to hospitals outside the Strip, have claimed another Palestinian life.

The most recent case of permit delay led to the death of Mahmoud Mohammed Al-Kurd, a 45-year-old cancer patient from Deir al-Balah City, on 16 December 2022, after being repeatedly denied access to the Augusta Victoria Hospital in Jerusalem.

Al-Kurd suffered from lung cancer. Despite obtaining a medical referral from the Palestinian Ministry of Health and securing appointments at the Augusta Victoria Hospital in Jerusalem, Israeli authorities denied him the requisite exit permit to travel for four different appointments.

The last appointment to which access was denied for Al-Kurd was scheduled for 29 November 2022.

As Al-Kurd’s legal representative, Al Mezan communicated with the Israeli Coordination and Liaison Administration (CLA) at Erez Crossing to grant him a permit, but to no avail.

We then filed a preliminary petition to the Israeli Prosecutor’s Office in Beersheba to facilitate the patient’s access to the hospital, but the Prosecutor’s Office responded that they would allow him to pass through Jordan, although his appointment was in Jerusalem.

At that point, Al Mezan, together with Physicians for Human Rights – Israel (PHRI), took the case to the Israeli Supreme Court, which approved the patient’s access to the hospital through the Erez crossing.

On 15 December 2022, the patient received a new hospital appointment at Augusta Victoria Hospital and accessed the hospital successfully. However, he arrived in Jerusalem in extremely poor health conditions and was pronounced dead the next day, at 10:30 pm on Friday, 16 December 2022.

We reiterate that Israel’s draconian, stifling closure of Gaza serves to deny inhabitants their fundamental right to health, and other inalienable rights, as part of an entrenched system of oppression, domination, and discrimination against the Palestinian people.

Al Mezan’s decades of experience in representing patients indicates that Israel’s denials or permit delays are not based on valid reasons but rather are part of the collective punishment and apartheid regime to which it subjects more than two million Palestinians in the Gaza Strip.

Al Mezan calls on the international community—in particular, the High Contracting Parties to the 1949 Geneva Conventions—to uphold their moral and legal obligations vis-à-vis the protected Palestinian people and to ensure Israel complies with its obligations under international law, ends the closure and blockade on the Gaza Strip, and stops its ongoing restrictions of Palestinian patients’ access to medical care outside the Gaza Strip.

Lastly, Al Mezan reiterates that the continued impunity provided to the Israeli forces encourages the repetition of crimes and violations against the Palestinian people.

NOTE: The West Bank has been under Israeli occupation since 1967. Israeli ‘settlers’ are living in jewish-only colonies that have been established on confiscated Palestinian land and are illegal under international law. Due to the pro-Israel lobby in the US, Congress disburses over $20 million per day of Americans’ tax money directly to or on behalf of Israel.

OTHER RECENT PALESTINIAN DEATHS IN JENIN: