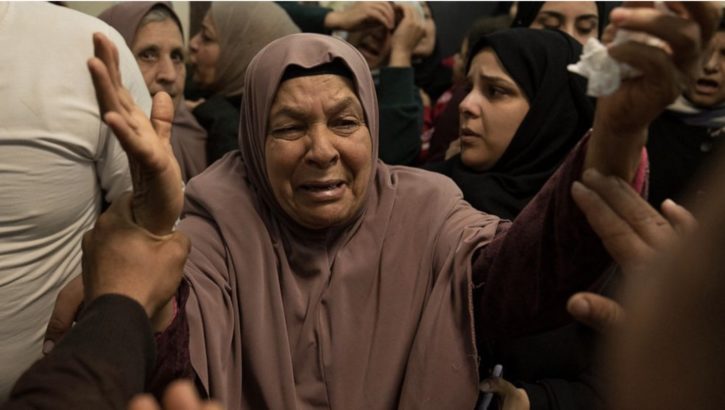 A mourner cries at Atta Shalabi's funeral in the West Bank town of Qabatiya, Dec. 8, 2022. (photo)

Israeli attacks continue against Palestinians, some of whom are exercising their internationally recognized right to resist occupation, others are ‘collateral damage.’ A 46-year-old laborer was killed while he was heading to work.

Palestinian non-combatants and minors who are killed during Israel’s allegedly “precise” targeted killings during undercover Israeli operations comprise the majority of those killed this year.

An eyewitness described one Israeli raid on Thursday as “a true massacre.”

Editor’s note: Shortly before 6 p.m. on Thursday evening, the Palestinian Ministry of Health reported that a fifth Palestinian was killed in the town of Aboud, north of Ramallah. At least three others were also injured with live ammunition. The slain Palestinian was identified as 16-year-old Diaa Muhammad Rimawi, from the village of Beit Rima. As of the time of writing, details of the incident are still emerging. [Update below]

The day before on Wednesday Mujahed Najjar Hamed, 32, was shot and killed after a days-long manhunt for the resistance fighter, who is from the village of Silwad.

Najjar was killed near the village of Deir Dibwan in Ramallah. Najjar had carried out several shooting operations targeting the illegal Israeli settlement of Ofra, as well as military checkpoints outside of Ramallah, and had been evading an Israeli manhunt for him for several days.

Since the beginning of the year, 223 Palestinians have been killed by Israeli forces. [NOTE: some sources have recorded lower numbers. IAK has documented 168 Palestinians killed in the West Bank and 51 in Gaza in 2022 – of which close to 40 were children.] Fifty-seven of these were killed in Jenin, starting with 17-year-old Muhammad Akram Abu Salah from the village of Yamoun near Jenin, on February 14. The number of the slain in the Jenin area have included veteran Palestinian-American journalist Shireen Abu Akleh earlier this May.

On Thursday during the early dawn hours, undercover Israeli special forces, intelligence units, and the army targeted resistance fighters Sidqi Zakarneh and Tareq Damaj as they were sitting in a vehicle reportedly belonging to Damaj, near a coffee shop located just outside Jenin refugee camp.

Moreover, according to eyewitnesses, during the operation targeting Zakarneh and Damaj, the targeted men did not engage in armed confrontation with the Israeli forces, and exchange of live fire was not reported indicting that their killing was a deliberate execution.

“A true massacre,” an eyewitness reported to local journalists shortly after the brutal killings of Zakarneh and Damaj. “They got out of the car and their bodies were riddled, specifically their heads and faces,” he said.  “As [the two men] were being shot, a sniper fired at a third man,” who was later identified as Atta Shalabi.

Shalabi, a 46-year-old laborer from the town of Qabatiya in Jenin, was killed during the assassination mission while he was heading to work. For Palestinian labor workers, passing through Israeli checkpoints to head to work on time requires that they leave the West Bank between dusk and dawn.

“It was a difficult sight, it was indescribable,” the man stated.

Shalabi is only the most recent Palestinian to have been killed in this manner.

Almost a month ago, Israeli soldiers also killed Raafat Al-Issa, 29 years old, as he was heading to work from Jenin. Al-Issa became known as “the martyr of daily bread,” as he was killed while attempting to earn a living amid the deteriorating economic conditions facing Palestinians.

According to data collected by Mondoweiss, Palestinian non-combatants and minors who are killed during these allegedly “precise” targeted killings during undercover Israeli operations comprise the majority of those killed this year.  The average age of those killed has been approximately 26.

Israel has not contented itself to kill and injure countless Palestinians in its nearly year-long offensive in the West Bank. It has also conducted thousands of arrests of Palestinians as a form of collective punishment, which constitutes a war crime under international law.

After killing Mujahed Najjar, Israeli forces arrested his father, Mahmoud Najjar, and his brother, Khaled Najjar on Thursday morning. Khaled Najjar was later released in the evening, while his father remains held captive by the Israeli military. Both father and son were denied the right to bury their son, who was put to rest in his village of Silwad early Thursday.

Also arrested were 17 other Palestinians, mostly from the Jenin, Nablus, Ramallah, and Bethlehem governorates. Among the arrested is Bassem Al-Za’arir, a Palestinian Legislative Council (PLC) member and part of the PLC electoral committee in Hebron.

The martyred Najjar was a former political detainee who was imprisoned for a total of nine years during his life. His last detention was in 2020, where he was held arbitrarily for almost two years (21 months) in prison with no charges or trial. He had spent almost a quarter of his life inside Israeli prisons, known for their torture and abusive practices against Palestinians, including children, minors, and those with chronic illnesses.

Najjar is also the father of one boy, and his wife is four months pregnant with their second child. The reality that Palestinian youth, especially boys and men, must navigate showcases that any one of them can be killed at any moment.

On Thursday evening, Israeli soldiers killed a teenage boy, seriously injured two others, and wounded three in Aboud village, northwest of Ramallah, in the central part of the occupied West Bank.

The Palestinian Health Ministry said it was officially informed of the death of Dia’ Mohammad Shafiq Rimawi, 16, at an Israeli medical center.

It stated that the soldiers shot two other teenage boys, causing moderate wounds, before Palestinian medics rushed them to a clinic in Beit Rima village, northwest of Ramallah; One was shot in the chest and the other in his leg.

Eyewitnesses said the soldiers left Dia’ bleeding on the ground without medical aid after refusing to allow Palestinian medics to approach him.

After his death, the corpse of the slain child was transferred to the Palestinian side and was moved to Palestine Medical Complex in Ramallah. His funeral procession is scheduled to be held Friday in Beit Rima.

One of Dia’s relatives said he, the oldest sibling in his family, was an eleventh-grade student at a school in Beit Rima and is the nephew of Wiliam Rimawi, imprisoned by Israel and serving a 32-year sentence.

NOTE: The entire West Bank has been under Israeli occupation since 1967; all its official entrances and exits are controlled by Israeli soldiers, making its Palestinian inhabitants virtual prisoners. Many are families that were ethnically cleansed from Israel during Israel’s founding war (see this and this and this). Israeli forces invade West Bank towns and villages daily. Thanks to the pro-Israel lobby in the US, Congress disburses over $20 million per day of Americans’ tax money directly to and/or on behalf of Israel.

Mariam Barghouti is the Senior Palestine Correspondent for Mondoweiss. Twitter ‘accidentally’ suspended her account for a time in May 2021.