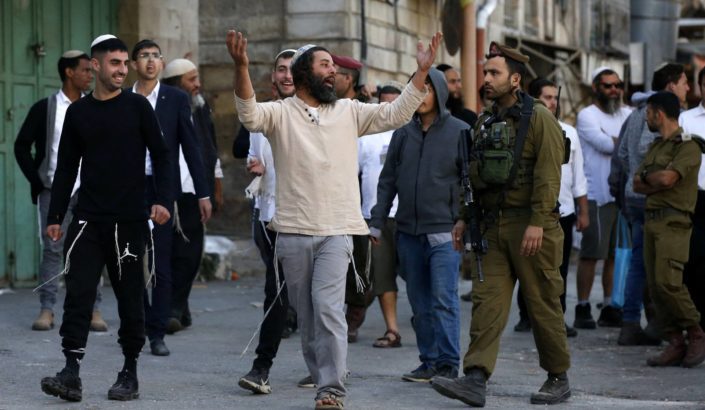 Israeli settler violence is often backed by the Israeli military, and Palestinian existence is neglected. (Pictured: Israeli security forces guard a group of ultra-Orthodox Jews in a Palestinian neighborhood of the Palestinian West Bank city of Hebron, November 23, 2019.)

In the last few weeks, and throughout 2021, the Washington Post covered several significant stories in Israel and Palestine that, for the analytical reader, reveal startling anomalies – anomalies in how the stories themselves unfold, and in how they are reported (or not reported).

The Washington Post reports that on Saturday, December 4 in Jerusalem, a Palestinian man stabbed and wounded an Israeli. An Israeli police officer shot the Palestinian and he fell to the ground, incapacitated. The police then shot him at least 3 more times, prevented medics from assisting him, and he died at the scene.

An eyewitness filmed the moment, which clearly shows that the Palestinian posed no danger (warning: disturbing).

Israeli police then used tear gas on Palestinians who gathered, agitated by the incident.

Within a short time, Israeli Prime Minister Naftali Bennett tweeted his support for the police, who he said had “acted quickly…in front of a terrorist who tried to murder an Israeli citizen.”

In November, a similar attack by a Palestinian – this time with a gun – resulted in the death of 1 Israeli before the Palestinian was also killed by Israeli security forces. This was the first fatal attack on an Israeli in the Old City in over three years.

A recent Washington Post article reports that Israeli settler violence against Palestinians has been on the rise. Israeli newspapers agree.

Israeli settlers – Jewish Israelis living illegally on Palestinian land – are (in theory) controlled by the Israeli military, not the Palestinian police.

So far in 2021, Israeli settlers have attacked at least 115 Palestinians, leading to 4 Palestinian fatalities. Additionally, this year has seen at least 300 incidents of Israelis damaging Palestinian property, in many cases destroying olive trees that Palestinians rely on for a living. Most of the incidents took place on Palestinian private property.

The Israeli human rights group B’Tselem has meticulously documented such incidents for many years. In a recent study of 451 settler attacks on Palestinians since early 2020, B’Tselem reported that in 66% of the incidents, Israeli forces never arrived at the scene; on those occasions when they did show up, 57% of the time they either did nothing or actively joined in the attack. In just 3% of the incidents did Israeli forces take action to “prevent settler violence.”

Last week, Israeli PM Gantz responded to the situation by calling a meeting of security officials to discuss new orders for Israeli soldiers, namely that, instead of “standing by,” they may need to begin protecting the Palestinians.

In reality, Israeli soldiers often don’t just stand by – as numerous videos demonstrate, many times they participate in attacks alongside Israeli settlers (many examples here). Beyond that, rights groups maintain that when Israeli soldiers do intervene, they will more often detain the Palestinian victims than the settler aggressors.

Other politicians dodged the meeting, a move that one attendee described as “tantamount to the endorsement and encouragement of continued [settler] violence.”

Israeli soldiers are apparently working under orders to “stand by” – a policy that may or may not be changed. And a spokesperson for the Israeli military announced that Israeli soldier complicity in crime (caught countless times on video) is a myth.

On the other hand, when a Palestinian attacks an Israeli, Israeli police shoot; if the attacker survives, the police are free to continue shooting the Palestinian until he is dead.

Israeli police may also disburse outraged Palestinian crowds with tear gas; and finally, Israeli officials lavishly praise the killing of an incapacitated Palestinian who poses no threat to anyone.

What’s wrong with this picture?

The situation should bring up some important questions. Just a few:

Most of these questions share the same answer: as B’Tselem explains,

State violence – official and otherwise – is part and parcel of Israel’s apartheid regime, which aims to create a Jewish-only space between the Jordan River and the Mediterranean Sea…

Like state violence, settler violence is organized, institutionalized, well-equipped and implemented in order to achieve a defined strategic goal.

When the violence occurs with permission and assistance from the Israeli authorities and under its auspices, it is state violence. The settlers are not defying the state; they are doing its bidding.

American leaders, for the most part, do not bother to ask questions before sending Israel over $10 million a day of our tax dollars – but they should.

Who else should be asking penetrating questions? News media.

But instead of unearthing the truth, the Washington Post, for one, tends to follow Israel’s lead, treating Palestinian lives as inconsequential, Palestinian deaths as not newsworthy.

A further search, including all Post articles in 2021 with the words Israeli killed (excluding those deaths related to Israel’s attack on Gaza, in which 13 Israelis and 260 Palestinians were killed) turned up 1 more relevant article – “In West Bank, deadly clashes between Palestinians and Israeli forces open new flash point.” This headline belies the fact that these “deadly clashes” resulted in 11 Palestinian deaths and 0 Israeli deaths.

In fact, other than one Israeli killed in November, no Israelis were killed at the hands of a Palestinian in the West Bank or Jerusalem in 2021.

Approximately 60 Palestinians were killed by Israeli forces (not including the 260 in Gaza) in 2021, yet the only 2 articles the Post listed containing the words “Palestinian killed” involve a Palestinian who was killed after killing an Israeli, and the piece mentioned above with a deceptive headline.

To summarize: in 2021, 1 Israeli was killed (outside the Gaza conflict); the Post published 3 articles with the words “Israeli killed.” About 60 Palestinians were killed, but only 2 articles mentioned “Palestinian killed.”

Is this an indication of the value the Post places on Palestinian lives? Does the Post have a vested interest in painting Israel as a victim, when in reality it is the aggressor?

Why are Palestinians so angry?

The Post and other mainstream news outlets also fail to report adequately about the injustice surrounding the entire Palestinian issue – as If Americans Knew has reported often, for example here, here, and here. (Israel actively censors outgoing news as well – read this, this, and this for example.)

Without the background on exile, occupation, blockade, oppression, and discrimination (the word “apartheid” is being used more and more frequently), readers lack an understanding of Palestinian resentment toward Israel.

With the daily brutality from Israeli settlers and military, no accountability, and no path toward justice, we should not be surprised that occasionally a Palestinian succumbs to violence.