You Are Here: Home → Shackled, Beaten, Strung Up on a Tree: Palestinian Teen Brutally Attacked by Settlers

Shackled, Beaten, Strung Up on a Tree: Palestinian Teen Brutally Attacked by Settlers 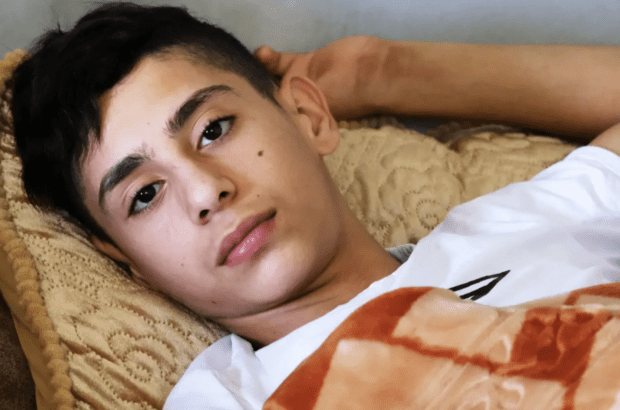 Fifteen-year-old Tareq Zubeidi, a victim of settler violence this week. The settlers kicked him, he says, as he lay on the ground, then placed him on the hood of the car, lashing him to it with a chain.

At the supposedly evacuated settlement of Homesh last week, a Palestinian teen was seized by settlers and subjected to physical violence for more than two hours. It’s a regular practice at this site that the court long ago ordered to be open to Palestinians.

by Gideon Levy and Alex Levoc, reposted from Ha’aretz, August 26, 2021

Tareq Zubeidi lies on his steel bed in a corner of the dimly lit living room, covered to the neck with a synthetic blanket and staring at the ceiling. A pale boy of 15 still without a hint of a beard, his smile is soft, his voice whispery. If he’s inadvertently touched on the legs, especially around the knees, he leaps up as though bitten by a snake and his face blanches with pain.

Etched into the soles of his feet are two large round scars – the reasons why it is impossible for him to stand up. His face was covered when the settlers inflicted the injuries on him, but he’s convinced that one wound was caused by burning, probably with a lighter held under one foot until the flesh was singed, while the other foot was dealt blows with an iron rod. Tareq has been bedridden since that morning of horrors last Tuesday, and remains traumatized by the event.

The large village of Silat al-Daher is on the Nablus-Jenin road in the northern West Bank. Overlooking it from a high hill are remnants of the supposedly evacuated settlement of Homesh, which Israel dismantled in principle as part of the so-called disengagement process in 2005. At the same time, the High Court of Justice instructed the state to cancel the military seizure and closure orders that had prohibited Palestinians from accessing the site – but none of that has any connection with reality.

A group called “Homesh First” established a yeshiva at the site shortly after the evacuations; its students are among the most violence-prone of the settlers. Anyone who has ever tried to approach Homesh knows what – and especially who – is involved. The High Court ruling was long since trampled underfoot here and no one gives a hoot. The Israel human rights organization B’Tselem has documented no fewer than seven violent assaults on Palestinians by settlers from the Homesh yeshiva since March 2020.

On one occasion they attacked a group of women and an infant, on another they pummeled a farmer with sticks and stones, on a third they broke the leg of a shepherd with rocks, and twice they attacked houses and vehicles at the outskirts of the village. Nevertheless, last week, on August 17, a group of youths from Silat al-Daher decided to hold a picnic and barbecue near Homesh, in the grove that is the village’s green lung.

According to what Tareq told us – he had earlier related the events to B’Tselem field researcher Abdulkarim Sadi, who met him the day after the incident and was appalled at the teen’s traumatized condition – the story began around 9 A.M. that day, when the youths met in front of the local high school, where the new school year had begun a day earlier. Of the six teenagers, some had dropped out of school and others had decided to skip a day of classes at the beginning of the year. Tareq dropped out in the seventh grade, when he was 13, and had gone to work in a village bakery that belongs to his uncle.

After buying turkey meat they ascended the hill on foot. The road for vehicles is blocked because of the Homesh settlers, who don’t let any Palestinians approach. Shortly after they arrived at the site, where they sat under a tree, shooting the breeze, the group suddenly heard voices speaking Hebrew. Tareq recalls that they both he and his friends were gripped with fear. A few dozen meters from them, a silver-gray car appeared carrying four settlers, with two more following on foot. Only a few hundred meters separated the picnic site from what was Homesh, with its large reservoir, its trademark, which wasn’t demolished in the 2005 evacuation.

The boys immediately got up and ran for their lives. Any thought of a picnic that day was banished from their minds. But Tareq had hurt his leg on the way up and couldn’t move fast. The car sped after him, gave him a nudge and knocked him down. The four settlers got out of the car and started to beat him all over and curse him. They had large kippot on their heads, and long sidelocks, he relates. One went back to the car to get a rope, with which they then tied his hands behind him and bound his legs as well. Tareq shouted in fear and pain. The settlers kicked him, he says, as he lay immobile on the ground.

Then they lifted him and placed him on the hood of the car, lashing him to the vehicle with an iron chain so he wouldn’t fall off. The car drove a few minutes until it reached the pond in Homesh. The driver braked abruptly and Tareq fell off, as the settlers had loosened the chain along the way. Two buses of settlers arrived at the site, Tareq recalls, but it’s not clear whether they took part in the abuse. Someone sprayed his face with pepper spray, another person kicked him. Lying on the ground, he was certain he was about to be killed. A few more settlers joined in the kicking. Then they blindfolded him with a rag. Tareq felt them spitting at him and heard their volley of curses.

“It was a horrible, scary experience,” he says, adding that he estimates that he lay like that for about an hour and a half.

Then the settlers carried him to a tree and hung him from it by his hands, so that his legs dangled in the air. With another rope they tied his body to the tree trunk. He thinks he was in that position for about five minutes. “Just then I felt that one settler was hitting the bottom of my foot with an iron rod and another one was holding something burning next to the bottom of my other foot.”

Tareq shows us the injuries to the soles of his feet. He says he cried and shouted the whole time, and that the settlers never stopped cursing him. When they lowered him from the tree one of the assailants struck him in the head with a club. One of them shouted at him, “I’m crazy, I’m crazy.” Tareq lost consciousness.

When he came to, he found himself in an Israeli army jeep. A soldier gave him his cell phone so he could speak with someone who spoke Arabic, apparently a Shin Bet security service agent, who threatened that the youth would be arrested if there was stone throwing in the village. The soldiers asked for Tareq’s ID card – he told them he was still too young to have one.

The Israel Defense Forces Spokesperson’s unit issued the following statement about the incident to Haaretz this week: “On Tuesday, August 17, a report was received about Palestinians who threw stones at settlers near the evacuated settlement of Homesh, which is in the sector of the Shomron [Samaria] territorial brigade. After the report was received, IDF fighters reached the site and spotted settlers pursuing a Palestinian youth. The force commander dealt with the event and conveyed the Palestinian youth to his family.”

Immediately after the incident began, Tareq’s five friends reached Silat al-Daher and told his family that he had remained behind. His older brother Hisham and his uncle Murwah rushed to the intersection at the entrance to Homesh, but they were afraid to proceed by car on the road leading up to the settlement. After a time they saw an IDF officer, called him over and told him what had happened. Shortly afterward an IDF jeep brought the wounded Tareq back to them. A Palestinian ambulance that happened to pass by on the highway with a patient who had been discharged from a Nablus hospital stopped, and the patient, who was in good condition, suggested that the ambulance take Tareq in his place. Along with his brother and his uncle, Tareq was taken to the Khalil Suleiman Government Hospital in Jenin.

According to the hospital’s records, he arrived there at 1:03 P.M., underwent a series of tests and was discharged the next day. The physical injuries were less serious than they had initially seemed to be, but the mental injury was apparently more severe. Tareq relates that since that day, he hasn’t been able to sleep, and that he feels anxious, especially in the dark. His brother and uncle have been sleeping in the same room with him.

“If I stay alone in the dark, I start thinking about that nightmare with the settlers. I feel that I am sweating in every part of my body. I feel that my heart is pounding fast.” In the meantime, Tareq cannot walk without help – he is carried to the bathroom by family members. The soles of his feet are wounded and his knees are swollen.