Israel’s killing of Palestinian children: ~80 so far in 2021 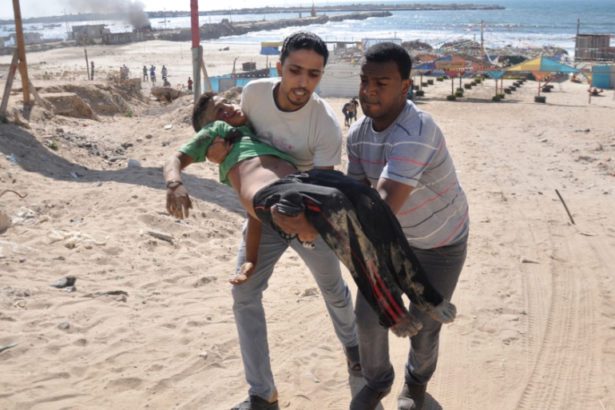 This year has seen a heartbreaking spike in the number of Palestinian children killed by Israel, leading to condemnation by the Office of the United Nations High Commissioner for Human Rights. (Mohammed Talatene/Reuters)

Al Jazeera reports that so far in 2021, Israel has killed 12 Palestinian children in the West Bank [one more has just been killed] and 67 in the May attack on Gaza. Defense for Children International declares that Israel regularly commits “extrajudicial or willful killings” of Palestinian children. (During this time, 2 children in Israel were also killed.)

Trying hard not to break down in front of her children, Bara’a Tamimi, from the village of Nabi Saleh, near Ramallah, tried to comfort her son before breaking down and weeping.

Last month her other son Muhammad Tamimi, 17, died after Israeli soldiers shot him in the back three times with live ammunition.

“We rushed him to hospital but he died less than an hour after he was shot. They couldn’t save him,” Bara’a told Al Jazeera.

There were no clashes in the village that day on July 23, but Israeli soldiers had been coming into the village on an almost daily basis and provoking the locals, shooting tear gas canisters into homes and swearing at the villagers.

Nabi Saleh is home to about 600 people, mostly from the Tamimi clan, and has a history of activism, which included regular Friday protests in the past.

“Muhammad was in the backyard when the soldiers shot tear gas into our home, forcing me to take the other young children into the inner rooms of the home for their safety,” said Bara’a as she recalled the events leading up to Muhammad’s killing.

“A verbal confrontation then ensued between Muhammad and the soldiers before he later went out to look for one of his brothers who has cancer in one of his eyes and can’t see properly. A short while later I heard three gunshots.”

On July 28, Muhammad Abu Sara, 11, died from a gunshot wound to the chest after Israeli soldiers fired 13 rounds at his father’s car in the Palestinian village of Beit Ummar in the southern West Bank.

Again, there were no clashes in the village that day.

The Israeli soldiers said the vehicle failed to stop when ordered to do so. But Defense for Children International-Palestine (DCIP) said that under international law, intentional lethal force was only justified in circumstances where a direct threat to life or of serious injury was present.

“However, investigations and evidence collected by DCIP regularly suggest that Israeli forces use lethal force against Palestinian children in circumstances that may amount to extrajudicial or willful killings,” said DCIP.

On Tuesday, a 15-year-old Palestinian was killed by Israeli live fire in the occupied West Bank. The Palestinian health ministry said Imad Khaled Saleh Hashash died after sustaining a gunshot wound to the head.

The deaths of the three boys were among 12 children killed in the Israeli-occupied West Bank this year, according to the UN Office of the High Commissioner for Human Rights (OHCHR).

Another 67 children were killed in Gaza during Israel’s attack in May.

According to DCIP, seven children were killed in Gaza and the West Bank in 2020.

This spike in the number of child fatalities, and a raid on the DCIP offices in Al Bireh by Israeli security forces at the end of July, led human rights experts from the Office of the United Nations High Commissioner for Human Rights (OHCHR) to call on the Israeli government to “immediately return confidential documents and office equipment that its military seized from the offices of the DCIP”.

“We are deeply concerned by the Israeli military’s interference with the human rights work of a well-known and well-regarded NGO,” said the experts.

Computers, hard drives, binders and other materials were taken from DCIP’s offices during the nighttime raid.

“The indispensable work of Palestinian, Israeli and international civil society organisations has provided a measure of much-needed accountability in documenting and scrutinising the dispiriting human rights trends in the occupied Palestinian territory,” OHCHR said.

DCIP provided critical and reliable reporting on the patterns of arrests, maimings, and killings of Palestinian children by the Israeli military in the occupied West Bank, including East Jerusalem, and Gaza, the organisation added.

“All civilian lives under occupation are protected under international law. This is particularly true for the rights of children,” the OHCHR experts said.

DCIP is waiting for a military court hearing on Tuesday to determine whether the files and equipment confiscated from their office will be returned.

“On the same day the military raided our office our lawyers notified Ofer Military Court of the issue and they contacted the military legal adviser requesting the files and equipment be returned by August 16,” DCIP spokesman Ayed Abu Eqtaish told Al Jazeera.

“The legal adviser twice refused to return the stuff saying an investigation was being carried out, so we are taking the matter to court. This is not the first time we have been targeted by the Israeli authorities.

“Previously they would attack through proxy, pro-Israel organisations trying to slander us and undermine our reputation with our partners and donors but that never worked,” Abu Eqtaish told Al Jazeera.

Manal Tamimi, an activist from another family of Nabi Saleh’s Tamimi clan, said children in the village were regularly targeted and some of this targeting was to punish their parents for their political activism.

Manal’s husband Bilal has been regularly assaulted by Israeli soldiers for documenting their abuses during previous clashes with Palestinian youths in the village.

Several years ago, Manal was shot in the leg with live ammunition at the beginning of one demonstration.

“I was warned on my Facebook page prior to the protest that my blood would be spilled that day and at the beginning of the protest I was shot in the leg with a .22 bullet, which caused the bone to break,” she told Al Jazeera.

Her son Osama was previously imprisoned for nine months for allegedly taking part in protests.

However, it was the arrest and detention of her son Samer several years ago, when he was 11 years old, that really stressed the family.

“Samer and two other boys of the same age were arrested from Nabi Saleh and another village,” said Manal.

“The soldiers had come into the village, despite everything being quiet and they snatched two of the boys when they were near the supermarket and put them into a military jeep.

“I and several other women tried to physically stop the jeep but we couldn’t.

“We then went to the military checkpoint at the entrance of the village and shouted at the soldiers to tell us where the boys were but they wouldn’t.

“My husband and I were extremely worried as we didn’t know where he was or whether he’d been injured.”

“I was blindfolded and handcuffed and taken to a military base where we were all made to sit on the floor for six hours and questioned,” Samer told Al Jazeera.

During this time, none of the boys was given any food or water, and neither were their blindfolds or handcuffs removed.

Samer was also shown a video by the soldiers of his mother protesting at the checkpoint to frighten him. The boys were eventually released later that night following intervention by Palestinian officials.

“But now my son has a file and he is not allowed to cross through Israeli checkpoints even though he is only 15,” said Manal.

Manal said about 85 children from the village had been arrested over the years, 10 of them under 15. “More than 500 villagers had also been wounded, and five people were killed.”

She said soldiers in the village made life hard for the children by erecting regular checkpoints and stopping children from going to school, in addition to the beatings and arrests.

For a complete list of Israelis and Palestinians killed since 2000, please go here.