You Are Here: Home → Israel applauded the “extrajudicial execution” of Mohammad Salima 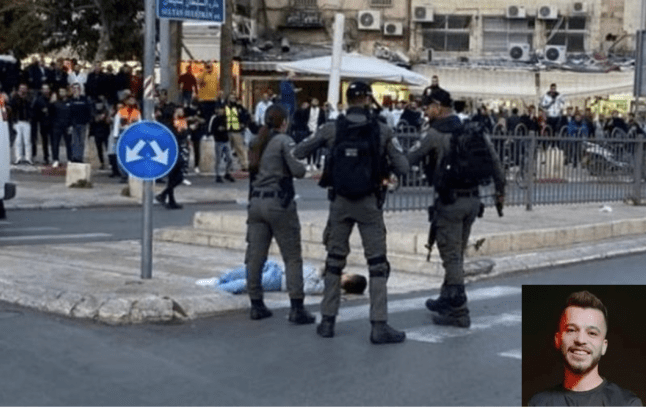 25-year-old Mohammad Salima was shot and killed as he lay on the ground, while posing no threat to Israeli forces.

After an alleged stabbing, Israeli soldiers shot Mohammad Salima, immobilizing him. Then, in what may be considered an extrajudicial execution, they continued to shoot him from “zero distance,” refusing medical care and allowing him to bleed to death. Israeli officials endorsed the action.

Mohammad Shawkat Salima, 25, was killed by Israeli soldiers after he stabbed an Israeli settler in occupied Jerusalem, in the West Bank.

Media sources said Mohammad was shot by at least two soldiers at the al-Misrara junction in Bab al-Amoud, in Jerusalem.

The second live round that killed the Palestinian was delivered after he was struck by the first bullet and was lying on the ground. [warning: disturbing]

[NOTE: this incident echoes the killing of Abdul-Fattah al-Sharif in 2016 by Israeli soldier Elor Azaria.]

After the fatal shooting, the soldiers also attacked many Palestinians who gathered in the area and fired gas bombs at them.

The Wadi Hilweh Information Center In Silwan (Silwanic) said the soldiers injured at least three Palestinians in Bab al-‘Amoud, in addition to abducting two others.

It added that one of the wounded was shot with a concussion grenade, and one was beaten by the soldiers, in addition to dozens who suffered the effects of tear gas inhalation.

The young man’s death led to protests in Jerusalem, Salfit, and other parts of the West Bank.

The Israeli police issued a statement and released a surveillance video showing the Palestinian man stabbing the Israeli, in addition to attempting to stab the police before he was shot.

Mohammad was from Salfit, in the central West Bank.

The United Nation’s Human Rights Office (OHCHR) said it was “shocked by the apparent extrajudicial execution,” while human rights groups have called the incident a “summary execution.”

Israeli human rights group, B’Tselem, said in a tweet: “Contrary to the sanitized terminology Israeli authorities and media use, the assailant wasn’t “neutralized”. He was summarily executed.”

On Saturday, 4 December 2021, in a crime amounting to extrajudicial execution, Israeli occupation forces (IOF) shot and killed a Palestinian male who stabbed an Israeli settler in occupied East Jerusalem; even though IOF had shot and wounded him, neutralizing any threats he proposed.

Data collected by the Palestinian Centre for Human Rights (PCHR) and footage that documented the incident showed that two Israeli soldiers opened fired continuously at a Palestinian male, despite that he was wounded and had fallen to the  ground; the soldiers left him to bleed out.

The crime was supported by the Israeli government, which confirms that Israel provides impunity for murder crimes against Palestinians.

According to PCHR’s investigations, at approximately 16:30 on Saturday, 04 December 2021, a Palestinian civilian, Mohammad Shawkat Salima, coming from al-Mosrarah intersection area arrived at a street adjacent to Bab al-‘Amoud area in central occupied East Jerusalem. When he approached an Israeli settler, he took a knife out and stabbed the settler several times, seriously wounding  him.

At that time, two Israeli border guard officers saw the incident; they rushed to the scene and opened fire at the Palestinian who was only 2 meters away from them. The wounded attempted to assault the soldiers but he sustained several live bullets wounds and fell to the ground while bleeding. As he fell to the ground wounded, and ceased to be a threat to anyone, the two border guard officers continued to fire several bullets at him from zero distance, leaving him bleeding on the ground for 40 minutes.

Afterwards, backup forces arrived at the scene and did not provide first aid to the wounded. Also, they prevented the Palestinian Red Crescent (PRCS) crews from reaching him to provide any help.

Following the incident, IOF completely closed Bab al-‘Amoud and al-Mosrarah areas and closed all al-Aqsa Mosque’s gates as well as the gates of occupied East Jerusalem’s wall. Also, they detained dozens of Palestinians who were in Bab al-‘Amoud and in Bab al-Sahera areas, in the center of occupied East Jerusalem, prevented them from entering or exiting the city for half an hour, physically assaulted some of them, and fired teargas canisters and sound bombs at them.

Moreover, IOF arrested a woman, whose identity remains unknown, from the scene and took her to Moscovia Detention Centre for interrogation.

Later on, IOF took the dead corpse to an unknown destination, and the victim’s identity was confirmed as Mohammed Showkat Mohammed Salima (25), from Salfit in northern West Bank.

The murder of Salima was supported by the Israeli government, as the Prime Minister of Israel, Naftali Bennett, tweeted:  “The soldiers acted as quickly and firmly as expected … I ask to give them full backing.”

As for the Israeli Foreign Minister, Yair Lapid, he also tweeted: “I completely back our security officers and border guard officers who responded quickly and firmly this evening.”[1]

This crime brings back to memory many cold-blooded murders against Palestinians by IOF, whether by targeting and killing the wounded, killing on grounds of suspicion, or killing without presence of any threat or danger to soldiers’ lives.

As these crimes continue with the full support of the Israeli government, it suggests that a high-level political office authorized these murder crimes that amount to extrajudicial execution. It is also another proof that the absence of accountability and the complicit silence of the international community encourages the occupation to commit more crimes.

PCHR demands the High Contracting Parties to the Geneva Conventions to ensure Israel abidance, as a Member State, to the application of the Conventions in the occupied Palestinian territory.

PCHR calls upon the High Contracting Parties to the Geneva Conventions to fulfill their obligations to ensure respect to the Conventions and to take practical steps towards holing Israeli war criminals accountable by ending the impunity enjoyed by the occupation for many decades.