You Are Here: Home → The Washington Post Redacted Facts About Israel’s Destruction of COVID-19 Clinics 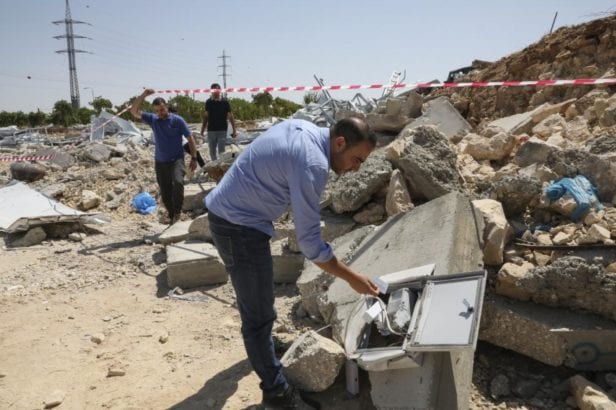 The Washington Post doesn’t want us to know that Israel destroyed Palestinian Covid clinics. (Pictured: Palestinian engineer Raed Maswade inspects the rubble of the testing centre after it was demolished by Israeli authorities in Hebron)

The Washington Post claimed, in spite of clear evidence to the contrary, that Israel had never destroyed Palestinian Covid clinics. In fact Israel is guilty of this and a multitude of other human rights abuses – as a pandemic rages, and with financial support from the US.

(NOTE: One year ago, If Americans Knew published this 3-minute video on Israel’s demolition of a Palestinian Covid clinic.)

COVID-19 has been a scourge worldwide and even more so in poor countries with few resources and scarce vaccines—like Palestine.

I responded to a Washington Post article lauding Israel’s success in vaccinating its population with a letter to the editor. I stated that as the occupying power, Israel is responsible for vaccinating the Palestinians. Instead, the Government of Israel has destroyed clinics, harassed Palestinian volunteers and medical staff and blocked vaccines from reaching occupied Gaza, East Jerusalem and the West Bank.

The Post published my letter on March 8. However, on March 10, the Post published a “correction” online and in print stating, “Rosemarie M. Esber’s March 8 letter, ‘Gaza needs vaccines, too,’ incorrectly said that ‘Israel has destroyed testing sites’ to prevent Palestinians from getting coronavirus tests and vaccines.” The Post redacted the facts and published misinformation—without informing me.

I sent to the Post’s editors media reports from ABC News, B’Tselem—the Israeli Information Center for Human Rights—Haaretz, The Times of Israel, Mondoweiss, Palestine Chronicle, Doctors Without Borders, and The South African. The stories corroborate that the Government of Israel destroyed multiple Palestinian COVID-19 clinics, materials and testing sites, and prevented medical care to Palestinians in the reported sites of Jenin, Hebron, Khirbet Ibziq  and Silwan. The published reports are further supported by first-hand accounts from Palestinians living in occupied Gaza and the West Bank.

I repeatedly asked several Post editors to reinstate the facts in my letter and to issue a correction online and in print. I received no response from the editors.

THE POST’S POWER TO SUPPRESS FACTS

Instead, on March 12, the Post published a biased letter with false information, which a Post editor nonetheless described as “a fair criticism,” despite clear-cut evidence to the contrary. One commenter about the Post’s retraction of readily verifiable facts tweeted, “Doesn’t the Post have Google?”

It is shocking that the Washington Post—a newspaper of record—would deliberately suppress verifiable facts and contravene its own Policies and Standards to “tell the truth as nearly as the truth may be ascertained,” and to “tell ALL the truth so far as it can learn it, concerning the important affairs of America and the world.”

I requested a meeting to discuss the Post’s editorial policy on Israel and Palestine reportage. The managing editor of news responded he was not responsible. The editorial page editor wrote that he was too busy to meet with representatives of several human rights organizations.

With no opportunity to present the facts directly to the editors, I posted the media reports in the letters’ online comments. They corroborate that the Government of Israel is obstructing critical testing, and preventing vaccines and medical care from reaching Palestinians, as well as blocking the basic human necessities of clean water and reliable electricity—which are vital to sustain life—and to deliver basic medical care and treatment.

Israel is therefore “responsible for ensuring and maintaining public hygiene and the healthcare systems of the occupied populations living under their control, including measures to prevent the spread of infectious disease and epidemics.”

The Institute for Middle East Understanding’s fact sheet on “Israel’s Responsibility to Vaccinate Palestinians during the Pandemic” states that according to Article 56 of the Fourth Geneva Convention, “To the fullest extent of the means available to it, the occupying power has the duty of ensuring and maintaining public hygiene and the healthcare systems of the occupied populations living under their control, including measures to prevent the spread of infectious disease and epidemics.” Since Israel is donating vaccines to other countries, it certainly has the means to vaccinate the Palestinians, which is Israel’s immediate responsibility.

Amnesty International and Human Rights Watch condemned Israel’s discriminatory policy in a Jan. 21, 2021 statement declaring, “The Israeli government must stop ignoring its international obligations as an occupying power and immediately act to ensure that COVID-19 vaccines are equally and fairly provided to Palestinians living under its occupation in the West Bank and the Gaza Strip.”

The U.S. government has supported the Zionist colonization of Palestine since Woodrow Wilson endorsed the 1917 Balfour Declaration, in which the British promised to facilitate Zionist immigration to Palestine, a land it did not possess.

During the 1948 Palestine war, the Israelis expelled more than 800,000 Palestinians from their homes and lands. Israel expelled another 200,000 Palestinians during the 1967 war. Through discriminatory laws and policies, Israel continues its policy of forcibly removing the Palestinians, or making living conditions so unbearable that the Palestinians perish or emigrate. Nevertheless, successive U.S. administrations have supported the State of Israel, despite its flagrant breach of U.N. resolutions since December 1948.

The Biden administration and the U.S. Congress have pledged unwavering military, political and economic fealty to the State of Israel—despite its daily human rights abuses. The U.S. government has unconditionally transferred $3 trillion in U.S. taxpayers’ dollars to Israel, which is over $10 million per day—when more than ever we need our tax dollars at home to “build back better.” The U.S. government has also shielded Israel’s impunity at the United Nations, which has seriously corroded America’s own moral authority.

The U.S. and state governments are also attempting to deny Americans their First Amendment right to boycott Israel’s gross violations of international and human rights laws and to suppress freedom of speech—particularly at universities. As of 2020, 32 states have passed bills or executive orders to discourage or punish boycotts of Israel, even though 72 percent of Americans oppose such laws that stifle legitimate protest.

The Boycott, Divestment and Sanctions (BDS) movement “works to end international support for Israel’s oppression of Palestinians and pressure Israel to comply with international law.” BDS is a nonviolent effort of the Palestinian civil society to achieve freedom, justice, and equality. “BDS upholds the simple principle that Palestinians are entitled to the same rights as the rest of humanity.”

Senator Joe Biden was “proud to have been a leading voice in the U.S. Senate against the white supremacist regime of South Africa.” He called the South African apartheid government “repulsive” and “repugnant.” Yet, Biden has vowed to “firmly reject the BDS movement,” which he asserts “singles out Israel and too often veers into anti-Semitism.” President Joe Biden is defending the indefensible when the South African government describes Israel “as the only apartheid state in the world.”

Biden and Congress also ignore U.S. laws such as the Leahy Law, which “prohibits the United States from providing any weapons or training to ‘any unit of the security forces of a foreign country if the Secretary of State has credible evidence that such unit has committed gross violations of human rights.’” (NOTE: read more about the Leahy Laws here.)

Officials in Biden’s cabinet are on record dismissing international and human rights law. During her confirmation hearing for U.N. Ambassador, Linda Thomas-Greenfield, stated “I look forward to standing with Israel.” As a representative of the United States government and the American people, Ambassador Thomas-Greenfield’s responsibility is to stand for the equal enforcement and respect of the rule of law and human rights—including, in the first instance, by the U.S. government.

Defending serial abusers of human rights and international humanitarian laws—whether by allies or not—seriously harms U.S. standing in the world, its credibility, and the national security. Secretary of State Antony Blinken, like Biden, stated he “would not tie military assistance to Israel to things like annexation or other decisions by the Israeli government with which we might disagree.” The Biden administration policy therefore is one of indulgence toward Israel’s contravention of international law.

Why should other countries be obliged to respect the rule of law and human rights when the U.S. government and the Israeli government exempt themselves?

The world is watching the United States’ hypocritical “do as we say and not as we do” human rights policy. In recent meetings, China was quick to publicly rebuke Secretary Blinken and National Security Adviser Jake Sullivan about U.S. problems with racial injustices, and specifically the Black Lives Matter’s movement. Russia also reminded the world of American’s own history of “slaughtering” the Indigenous Peoples, and the enslavement of African Americans.

In his remarks about the “skyrocketing” anti-Asian American attacks across the United States, President Biden said, “Our silence is complicity. We cannot be complicit. We have to speak out. We have to act.” Likewise, Biden must speak out and demand that Israel immediately lift the illegal blockade of Gaza (abetted by Egypt), end the military occupation, reverse the annexation of Jerusalem (and the Golan Heights), and stop Israel’s illegal settlement activities on occupied lands and resources. Otherwise, the Biden administration, like his predecessors, will remain complicit in Israel’s egregious discriminatory record.

Despite misinformation or bias from The Washington Post and other corporate media, American taxpayers are increasingly aware of Israel’s daily human rights abuses against the Palestinians. They are tired of supporting a militaristic system of Zionist supremacy that evicts elders and the disabled from their homes, imprisons and tortures children and political prisoners, steals land and water, murders and maims civilians with impunity, and humiliates Palestinians on a daily basis.

Palestinians are human beings and are deserving of the same equal human and civil rights enjoyed by most Israelis. Anything short of equality under the law—as B’Tselem concluded in its recent report—is apartheid.

Rosemarie M. Esber, Ph.D., is the author of Under the Cover of War: The Zionist Expulsion of the Palestinians.