You Are Here: Home → The Jewish community excommunicates Jews who support Palestinian freedom 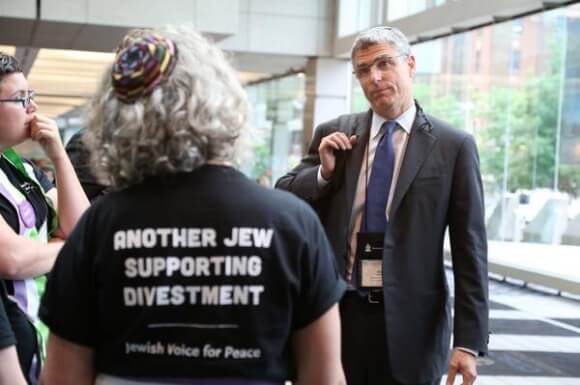 For supporting Palestinian human rights, Rabbi Alissa Wise received ‘vitriolic hatred’ from the Jewish community: ‘death threats, sexually threatening emails, voicemails and even letters delivered to my home.’ She’s now decided to stop her humanitarian work ‘for the sake of my children being Jewish,’ and has ‘decided to dedicate my life to the Jewish people.’ (A leading Zionist writer says 97 percent of Jews worldwide support Zionism)

When you are Jewish and come out as an anti-Zionist, you get excommunicated. That is how the Jewish community works to support Israel. The Jewish community says directly, You may choose your community or what you call your sense of ethics. And if you persist, forget about your community, because Jewish life as we know it is committed to supporting Israel, the miraculous achievement of the Jewish people in the 20th century in the wake of the extermination.

As an optimist, I keep declaring that this “herem” — or ban– is softening. That young Jews who believe in justice are slowly taking over the community and an apartheid state is becoming impossible to defend. But I’m inside the anti-Zionist bubble, not the community, and an interview published last week gives me pause. It is with a friend, Rabbi Alissa Wise, who lately stepped down as deputy director of Jewish Voice for Peace. Wise has played a big role in growing that organization into a political force, as an openly anti-Zionist organization that supports BDS.

In the interview, Wise says in so many words, I’ve had enough for now. I’ve battled my community for 20 years and now I am going to be a member of that community and take a less political role, for the sake of my children being Jewish.

The interview was published in the Jewish Currents newsletter. Editor Arielle Angel reached out to Wise because of a speech Wise gave at her Reconstructionist synagogue in West Philadelphia on March 12, to celebrate her departure from JVP. Wise spoke of the pride of building an anti-Zionist bloc among American Jews. “Our numbers have exploded in the past decade.”

But that achievement came at an “excruciating” personal cost, Wise said, alienation from her family and community. Wise has strong family connections to organized Jewry, and her first shock came in 2002, when her efforts to bring a group of Israeli draft resisters to the U.S. was rejected by every “liberal” Brooklyn synagogue she went to.

It was truly painful to see so plainly how the Jewish community I had been raised to trust was in fact so closed. Sure, looking back I was being totally naive, but I recall just feeling genuinely crushed that the community who taught me Judaism, which led me to understand that I have a responsibility to stand with Palestinians, would refuse to hear the voices of young Jewish Israelis because they were challenging the occupation.

Wise developed a “tough skin” under the hail of hate mail, but she fears the spiritual consequences.

[T]he most vitriolic hatred directed towards me comes from the Jewish community. It has come between me and my family. Over the past ten years, I have regularly received death threats, sexually threatening emails, voicemails and even letters delivered to my home. I have been barred from traveling to Israel. I almost was kicked out of rabbinical school. I have been called a kapo more times than I can count. I have developed a thick skin. One has to in order to keep doing this work.

I always maintained it didn’t seep in. But did it? Does it?…

She concluded that riding over the feeling of being trampled on by the community was actually hurtful. It prevented her from attaining her “full power.”

I think I was negligent when taking care of those feelings for myself, and I think that is a part of how I ended up needing to take a break 10 years in, when in all honesty I had imagined myself at JVP until JVP was not needed anymore.

We don’t want to let our skin be so tough that we don’t recognize the pain that is there. Let’s feel our pain AND feel our power…

Arielle Angel then drew Wise out in a Q-and-A. And my interpretation of Wise’s comments is: Jewishness is a core value, and she doesn’t want to be in an oppositional frame so as to allow her children to grow up with a healthy relationship to Jewishness and life.

Some excerpts. Wise says we’re in a “closed” period of Jewish history not so different from the insular intolerance of religious Jews in the eastern European ghettos before the enlightenment.

“We’ve been in a closed period again, because of the hegemonic power of Zionism in the Jewish community. The vision I have is one of openness.”

But she can’t bring about that openness personally. She’s been scarred by the exclusions, notably when she was barred from getting on a plane to Israel and Palestine.

“[T]hat was the beginning of the end for me…I really felt like I’d been trampled on. I reached a point where the thick skin turned from being protective to being corrosive. There’s only so much that one can bounce back from. I’m not leaving the Palestinian rights movement, but I am attentive to where I am emotionally and how that affects my ability to lead this organization….

Wise recognized that membership in the Jewish community is central to her.

[T]he future of Judaism and Jewishness still matters to me and is the centerpiece of my life.

My kid is in second grade, and she was in her Torah school class on Zoom last week… The teacher introduced the concept of l’dor v’dor, from generation to generation, because they were going to be talking to an elder. She asked the class, “What do you want to pass down to the next generation?”—which is a very tender thing to ask eight-year-olds. One little girl said, “I want to pass down being Jewish.” I started crying in the other room, because that’s what I want. I have this sacred, intimate responsibility to caretake Judaism in my lifetime…

Wise says she has banged her head against the wall for 20 years trying to get the Jewish community to change its views of Palestine, and it worked. “Now there are anti-Zionist Jews all over rabbinical school!”

But the political approach can be overwhelming, for instance when every Torah portion has to be interpreted in an anti-Zionist manner. That’s one reason she is leaving JVP.

Alissa Wise imagines an open Jewish community in which everyone is not judged either for being a Zionist or an anti-Zionist.

One principle I emphasized to [JVP staffers] was pluralism: No matter how much we want to interpret a Torah text or a holiday cycle or a historical event in a way that brings people into solidarity with Palestinians, we need to leave room for other ways to be Jewish. Obviously, I want there not to be apartheid in Israel. I don’t want Palestinians to be living under occupation. But that’s different from how we live our Jewish cultural and spiritual lives. Our vision isn’t that everybody be anti-Zionist, or for that to be the centerpiece of everybody’s Jewish lives. It needs to be bigger than just an expression of a particular politics

And she believes her next job will be in Jewish life.

I decided to dedicate my life to the Jewish people, and I’m going to pursue that and trust that the work I’ve been a part of has created enough space for another Jewish home for me.

I respect Wise’s choices. I like pluralism, I’m not a litmus test person. But having done this work for some time now and been subject to the same invective and ostracization, with the same initial emotional shock that Wise experienced, I’ve lost my romance about the Jewish community. It made a clear choice to cancel us. And I also made my choice: if excommunication is the cost of supporting Palestinian rights, bring it on. And to the extent Jewishness is important to me, which it still is, I am proud to have an outlaw Jewish community of friends.

Wise’s word “hegemonic” is helpful. So is her admission that her own family is divided. The official Jewish community has decided again and again in recent years that it is going to close rank around Zionism and muster the astounding historical unity of Jews to enforce orthodoxy in the face of apartheid. “[S]tudies have noted that the overwhelming majority of British Jews support Israel,” says a British Jewish group in enforcing the line. Anti-Zionist Jews are “as deeply opposed to Jewish interests as many of our community’s enemies,” a leading Zionist writer told a leading liberal NY Jewish institution. Another leading Zionist writer said that 97 percent of Jews worldwide support Zionism and that anti-Zionist Jews are as marginal as black people who voted for Trump.

The line here is clear. If you support BDS targeting Israel, you are not welcome. We will not invite you to the synagogue or even the J Street conference. We will say you are antisemitic, or “you have Jewish parents” (as former Israeli prison guard Jeffrey Goldberg [see this] once laid down the law to redline me and others).

The young Jewish group IfNotNow is still on the community side of the line. It is careful in its criticism of Israel; not taking an anti-Zionist position. That’s why it continues to be welcome in the Jewish community. Even if the US Campaign for Palestinian Rights is pushing it to go further, it hasn’t done so yet, presumably because it values its communal position. Jewish Currents is in a similar position. In that interview Angel notes that attacks from inside the Jewish community for the publication’s new investigative fund to look into the Israel lobby’s hold inside U.S. Jewish institutions, have been “exhausting” and “demoralizing.” I assume both IfNotNow and Jewish Currents will continue to move left.

Jewish Voice for Peace has been a leader, and over the line. It supports BDS. It is not welcome inside the Jewish community, except at outsider congregations, because it insists on the truth about Israel and Palestine: a tale of oppression. All the rest is just commentary. [Editor’s note: JVP, however, attacks Palestine solidarity groups and individuals who provide information they dislike, and until recently, despite JVP’s alleged support for BDS, its head had close family ties to an Israeli company that worked with the Israeli military.]