You Are Here: Home → Unwilling and Unable: Israel’s Whitewashed Investigations of the Great March of Return Protests

Unwilling and Unable: Israel’s Whitewashed Investigations of the Great March of Return Protests 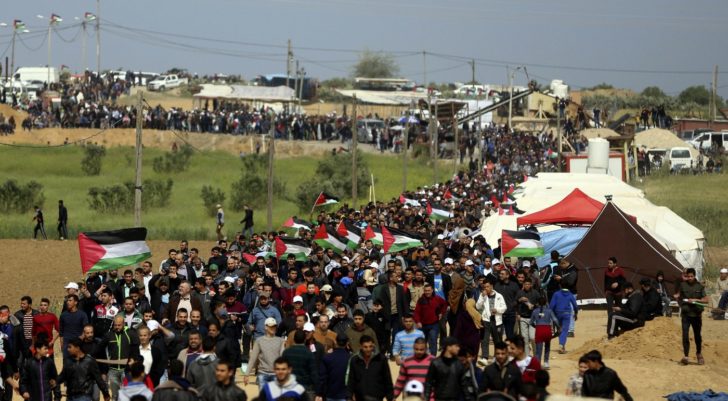 Palestinians march past a tent city erected along the border with Israel east of Gaza City in the Gaza Strip on March 30, 2018 – the first day of the Great March of Return.

In 2018-19, Israel met a Palestinian nonviolent movement with violence week after week – causing 13,000 Palestinian injuries and 234 deaths – then went through the motions of “investigating” its military’s wrongdoing. In reality, the Israeli investigation focused on isolated incidents, rather than the real root of the problem: Israel’s open-fire policy and the world’s failure to hold Israel accountable.

The Israeli organization B’Tselem and the Palestine Center for Human Rights combined to produce a detailed report deconstructing the Israeli investigation. Below is their summary – for citations see the full report.

On 30 March 2018 – Land Day – Palestinians in the Gaza Strip began to hold regular protests dubbed “the Great March of Return” along the perimeter fence, demanding an end to the blockade Israel has imposed on the Strip since 2007 (causing massive misery), and calling for fulfillment of the right of return. The protests, held mostly on Fridays with tens of thousands participating, including children, women and seniors, continued until the end of 2019.

[Read IAK’s chronicling of the Great March of Return here.]

Israel was quick to frame the protests as illegitimate even before they began. It made various attempts to prevent the demonstrations and declared in advance it would violently disperse the protesters. The military deployed dozens of snipers along the fence, and various officials clarified that the open-fire regulations would permit lethal fire against anyone attempting to approach the fence or damage it.

When Gaza residents went ahead with the demonstrations regardless, Israel made good on its threats and its open-fire regulations permitted use of live fire against unarmed protestors. As a result, 223 Palestinians, 46 of them under the age of 18, were killed and some 8,000 injured. The vast majority of the persons killed or injured were unarmed and posed no threat to the well-armored soldiers standing on the other side of the fence.

Israel responded to international criticism of the casualty toll by saying it would investigate the incidents. Yet today, more than forty months after the first demonstration, it is clear that the military’s investigations in relation to the Gaza protests were never intended to ensure justice for the victims or to deter troops from similar action. These investigations – much like the investigations conducted by the military law enforcement system in other cases in which soldiers have harmed Palestinians – are part of Israel’s whitewashing mechanism, and their main purpose remains to silence external criticism, so that Israel can continue to implement its policy unchanged.

The responsibility for determining the open-fire policy, for giving soldiers illegal orders, and for the resulting lethal outcomes, lies with the policymakers. However, the persons primarily responsible for the events and for determining the policy – the government-level officials who shaped, backed and encouraged it, and the Attorney General who confirmed its legality – were never investigated.

The investigations have not looked into the regulations and policies employed during the protests, but have focused entirely on isolated cases considered “exceptional.”

State officials have admitted that one of the reasons for Israel’s speedy announcement that investigations would be conducted lies in the proceedings that were – and still are – being conducted against it in the International Criminal Court in The Hague. One of the guiding principles for the ICC’s work is complementarity, meaning the ICC will assert jurisdiction only when the state in question is “unwilling or unable” to carry out its own investigation. Once a state has investigated the incidents, the ICC will not intervene.

(Read more about the ICC investigation into Israel here and here.)

However, declaring an investigation is underway is not enough to stave off intervention by the ICC. The investigation must be effective and must look into the responsibility of the higher-ranking officials who devised the policy, and possibly lead to action against them where necessary. Israel’s investigations in relation to the Gaza protests do not meet these requirements: They consist entirely of the military investigating its own conduct. They focus exclusively on lower-ranking soldiers, and investigators are given a narrow mandate limited to clarifying whether the regulations have been breached, while completely ignoring the question of their lawfulness and of the open-fire policy itself.

Nor can it be argued – as Israeli officials have – that the open-fire policy has been upheld by Israel’s Supreme Court, which heard petitions filed against them. The justices may have dismissed the petitions and allowed the military to continue employing the policy, but the court did not uphold the regulations implemented on the ground – as they were never presented to the justices.

The court did approve the regulations that the state claimed the military was following, but did so while ignoring the glaring disparity between the information presented to the justices and reality on the ground – a gap that was apparent in real time, as the court was hearing the petition.

What did the investigation include, ignore?

The investigations were entrusted to the Military Advocate General’s Corps (the MAG Corps), with the assistance of a special General Staff mechanism introduced after Operation Protective Edge (the FFA Mechanism). This mechanism was charged with a limited mission: investigating isolated incidents in which soldiers were suspected of breaching their orders.

The investigations focused on low-ranking soldiers on the ground. In these circumstances, even if the system had excelled in its investigative work and performed its mission successfully – the contribution to law enforcement would have been limited. Yet a review of the system’s operations shows that it does not strive to meet even this limited goal.

The military has only investigated cases in which Palestinians were killed by security forces, despite the large number of injuries, including ones that left victims paralyzed or forced to undergo amputations.

A total of more than 13,000 Palestinians were injured in the protests: some 8,000 by live fire, about 2,400 by rubber-coated metal bullets, and almost 3,000 by tear gas canisters that hit them directly. Of the persons wounded, 156 lost limbs. None of these cases were investigated.

The investigations that have taken place were not independent, as they were conducted entirely by the military, without civilian involvement. Moreover, both the Mag and the FFA Mechanism work extremely slowly.

According to figures supplied by the IDF Spokesperson to B’Tselem, as of 25 April 2021, the FFA Mechanism had received 234 cases in which Palestinians were killed. This figure includes Palestinians who were killed during the period in which the protests were held, but with no connection to them. The Mechanism completed its review in 143 of these cases and transferred them to the MAG Corps.

The MAG ordered the Military Police Investigation Unit (MPIU) to investigate 33 of the cases, as well as three other cases not handled by the FFA Mechanism. In four cases the investigation was closed with no action taken. In one more MPIU investigation – into the killing of 14-year-old ‘Othman Hiles – that was completed, a soldier was charged with abuse of authority to the point of endangering life or health and sentenced to one month’s military community service.

The MAG opted not to criminally investigate 95 cases in which the FFA Mechanism had completed its review, and closed the files with no further action. All other cases transferred to the MAG are under review.

Israel’s conduct regarding the investigation of the Gaza protests is neither new nor surprising. It is endemic to Israel’s law enforcement system, as seen, for instance, after the fighting in Operation Cast Lead in January 2009 and in Operation Protective Edge in August 2014. Then, too, Israel flouted international law, refused to reform its policy despite the lethal outcomes, and deflected criticism by promising to investigate its conduct. Then, too – nothing came of this promise. Barring a handful of non-representative cases, no one was held accountable for the horrifying results of an unlawful and immoral open-fire policy.

True policy change will come about only when Israel is forced to pay a price for its conduct, actions and policies.

When the smokescreen of domestic investigations is lifted and Israel is forced to reckon with its human rights abuses and breaches of international law, it will have to decide: openly admit that it does not recognize Palestinians as having political rights and as deserving of protection, and therefore has no interest in accountability for violating Palestinians’ human rights – or change its policy.