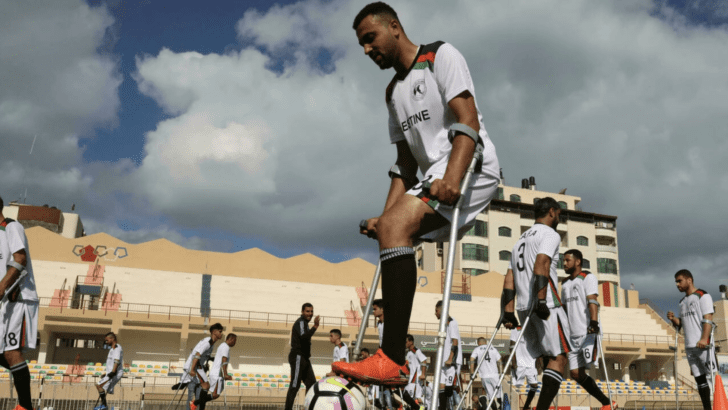 Palestinian amputees, part of a football team organised by the International Committee of the Red Cross for people with disabilities, take part in a training session in Gaza City.

Gaza has such a large population of young male amputees – courtesy of Israeli snipers – that they have formed a world-class Palestinian soccer team and joined the World Amputee Football Association.

Players in the Palestinian Gaza Strip used crutches and prosthetic legs Thursday to stretch, run and dribble as part of the first-ever Palestinian national team that hopes to qualify for the Amputee Football World Cup.

NOTE: The vast majority of limb amputees in Gaza are young Palestinian men, shot by Israeli soldiers during one of Israel’s many incursions, or during the roughly 18-month Great March of Return in Gaza – a movement in 2018-2019 that included peaceful demonstrations every Friday near the Israeli border to highlight Palestinians’ right to return from exile.

The Israeli human rights group B’Tselem reported that during the Great March, Israeli snipers implemented an “unlawful open-fire policy,” killing over 200 Palestinians, injured thousands, and resulted in limb amputations for 155 protesters, including 30 children.

Among a population of 2 million, there are around 1,600 amputees in Gaza.

(If Americans Knew finds it odd that AFP would publish this report on Palestinian amputees in Gaza with no clear explanation as to why so many young men are disabled.)

The team trained at the Palestine Stadium in Gaza City under the supervision of the International Committee of the Red Cross.

The 20 players on the team were selected from among five Gaza clubs for players who lost limbs.

Player Hassan Abu Kareem, 38, said his leg was amputated after he was injured in an Israeli raid on Al-Maghazi refugee camp in 2006.

“From the moment of injury, my life has not changed,” he told AFP.

“I continued with my ambition and great goal in life, and my goal is to represent Palestine and to make an achievement for myself in the field of sports.”

“Today, these players make history by forming the first national football team for amputees,” she said.

Zakkout said the players were training for qualifying matches to be held in March 2022 in Iran. If the team succeeds, they will go on to the Amputee Football World Cup, slated to be held in Turkey in late 2022.

Fuad Abu Ghaliun, chairman of the Palestine Amputee Football Association, said his group applied to join the World Amputee Football Federation in 2019. Their candidacy was accepted earlier this year.

Friday is the International Day of Persons with Disabilities.

Coach Simon Baker, himself an amputee, said he was working with players “in a way where people see the football being played, and not the person with a disability.”

“We want people to respect the players and see them for Ahmed or whoever it is and not see them as somebody broken. We want to make heroes of these players,” said Baker, who founded the Irish Amputee Football Association.

The Palestinian team is in the isolated Gaza Strip, whose two million residents have been locked under an Israeli blockade since the Islamist movement Hamas took control in 2007.

Ahmed Abu Nar, 34, used crutches and said he was injured in 2018 by Israeli forces who suppressed Gaza protests known as the “Great March of Return”.

“Before the injury I was one person, and after the injury I became someone else,” he told AFP. “A new life began, new goals began and new ambitions and new challenges, and now I am achieving my goals.”

To read about the Great March of Return (the 18-month Gazan campaign of nonviolent resistance in 2018-19), go here.