You Are Here: Home → MSF: 1,000 Gazans shot by Israel at risk of fatal infection

MSF: 1,000 Gazans shot by Israel at risk of fatal infection 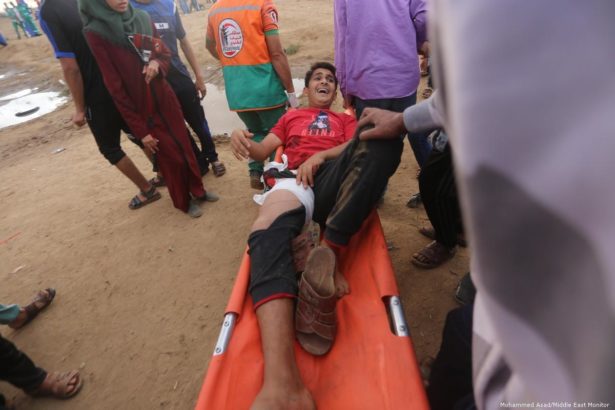 Palestinians in Gaza are dealing with more fallout from the blockade – and their protest against it. Now in addition to thousands of gunshot wounds from Israeli snipers, and their accompanying disabilities and amputations, many are at risk of infection. The healthcare sector is lacking in supplies thanks to import restrictions; patients can not go abroad for treatment thanks to visa restrictions.

One Israeli human rights org reports over 180 Palestinians killed (31 of them minors) and 21,000 injured.

International medical charity Médecins Sans Frontières (MSF, Doctors Without Borders) has said that more than 1,000 Gazans shot by Israel are at risk of infection, which could lead to permanent disabilities or death.

In a statement released today, MSF said that “the huge numbers of patients with complex and serious gunshot wounds are overwhelming the healthcare system in Gaza”, meaning their wounds often go untreated. This “could lead to lifelong disability for many, and untreated infections pose the risk of amputation or even death”, MSF added.

MSF emphasised that the crisis was caused by the severity of the wounds inflicted by Israel’s policy of “shoot to maim” during the Great March of Return protests. The charity explained:

The vast majority of the 3,117 patients treated by MSF between 30 March and 31 October – out of the total 5,866 the [Gaza] Ministry of Health says have been injured by live fire – had been shot in the leg. Around half suffered open fractures, with severe soft tissue damage to many of the rest.

“These are complex and serious injuries that do not quickly heal,” MSF added, saying: “Their severity and the lack of appropriate treatment in Gaza’s crippled health system means that infection is a high risk.”

MSF stressed that the situation was tantamount to a “slow-motion healthcare emergency,” with MSF’s Head of Mission in Palestine Marie-Elisabeth Ingres saying that: “This many patients would overstretch [even] the best healthcare systems in the world.” Although “Gaza currently lacks the ability to properly diagnose bone infections”, MSF estimates that 25 per cent of patients with fractures are infected – amounting to more than 1,000 Gazans.

To combat the crisis, MSF called on “authorities in Palestine and Israel to facilitate the transfer of these patients abroad [and] for other countries in the region and around the globe to step forward and offer funding and space in their hospitals.”

Yet Israel’s 11-year siege of the Strip regularly deprives Gaza’s almost two million strong population of adequate access to healthcare. Earlier this month, head of the Popular International Committee to Support Gaza, Dr Essam Yousef, said that the health sector in Gaza has deteriorated to an unprecedented level. He added that the problem “cannot be ignored,” as these institutions are unable to provide adequate and appropriate services to citizens across Gaza.

Israel further compounds the health crisis by refusing to allow patients to leave Gaza to receive treatment elsewhere. According to a report by the World Health Organisation (WHO), Israel prevented 763 Palestinian patients from leaving the besieged enclave for treatment in September. WHO pointed out that some 668 patient applications to travel through the Israeli-controlled Erez crossing (Beit Hanoun) were delayed, “receiving no definitive response to their application by the date of their hospital appointment”. Of these, 161 applications were for children under the age of 18.This crisis means that much-needed medicines are often unavailable to patients, with Deputy Minister of Health Yousef Abu-Rish saying in November that 47 per cent of medicines are in short supply in the Strip. Power outages as a result of fuel shortages are also commonplace, meaning that numerous hospital departments including dialysis, intensive care, surgery and neo-natal units are unable to treat patients or provide care.

Since the Great March of Return began on 30 March, the UN’s Office for the Coordination of Humanitarian Affairs (OCHAoPt) estimates that 150 Palestinians have been killed and a further 21,000 injured. OCHA’s figures only account for the period 30 March to 4 October, meaning the latest figures are likely to be higher. Israeli human rights organisation B’Tselem estimates that more than 180 protesters have been killed, including at least 31 minors.