You Are Here: Home → Youngsters “disabled for life” by Israel’s shoot-to-cripple policy in Gaza 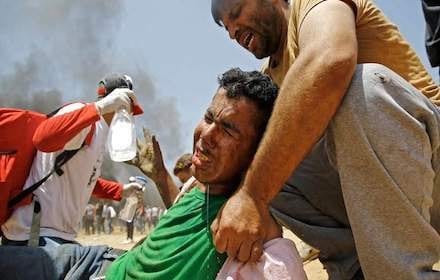 One of the young men whose lives will never be the same – because they chose unarmed protest and were met with gunfire.

The number of dead is outrageous; the number injured – especially gunshot victims, and particularly victims of “butterfly bullets” – is unconscionable. These young protesters will need multiple, complex surgeries (or amputation) and intensive rehabilitation, in a region where medical facilities and staff are already stretched beyond their limits. We can only hope for an authentic investigation via the UN Human Rights Council.

Writing in the BMJ (British Medical Journal), the head of Plastic and Reconstructive Surgery in Gaza, Dr Nafiz Abu-Shaban, reports that the death and injury toll by sniper fire, as at 18 May, was 117 dead, including 13 children, and 12,271 injured, of whom 6,760 had been admitted to hospital, including 3,598 with bullet wounds. The numbers will be considerably higher by now.

Worse still, according to Medecins Sans Frontieres (MSF) who operate in Gaza, the Israelis have been using ammunition that causes fist-sized wounds of “unusual severity”.

In a press release dated 19 April MSF surgeons in Gaza report “devastating gunshot wounds among hundreds of people injured during the protests over recent weeks. The huge majority of patients – mainly young men, but also some women and children – have unusually severe wounds to the lower extremities. MSF medical teams note the injuries include an extreme level of destruction to bones and soft tissue, and large exit wounds that can be the size of a fist.

“Half of the more than 500 patients we have admitted in our clinics have injuries where the bullet has literally destroyed tissue after having pulverized the bone,” said Marie-Elisabeth Ingres, head of mission of MSF in Palestine. “These patients will need to have very complex surgical operations and most of them will have disabilities for life.”

She is reported saying that she hadn’t seen these kind of injuries before. The wounds appeared to be caused by ammunition with an expanding “butterfly” effect.

Abu-Shaban says the hundreds of high energy compound tibial fractures from Israeli live fire are the most difficult of all open fractures to treat. They may require between five and seven surgical procedures, each operation taking three to six hours. He added:

Even with state-of-the-art reconstruction, healing takes one to two years. Most of these patients will develop osteomyelitis. A steadily increasing toll of secondary amputations is inevitable. They will also need intensive rehabilitation, but the only rehabilitation hospital in Gaza was destroyed by Israeli bombing in 2014 and has not been rebuilt. Mass lifelong disability is now the prospect facing Gazan citizens, largely young, who were merely gathering in unarmed protest about Israeli occupation and siege that has rendered their political and social futures impossible.

Reconstructing such injuries is far beyond the capabilities of Gazan medical services, now severely run down after 12 years of Israeli siege. The Shifa hospital is swamped and has no beds, let alone the dedicated limb salvage teams necessary for this work. Even London hospitals, which are fully resourced, would be stretched if confronted with mass casualties of this kind, says Abu-Shaban. He asks:

How are we here in Gaza to manage this situation? Why has no European government spoken out about events which if they had happened elsewhere would surely have been called an international outrage and probable war crime?

Good question. The sniveling international community does nothing to stop the vile crimes perpetrated by the self-styled “most moral army in the world.”

“I understand there is now the question of an investigation by the International Criminal Court,” says the good doctor hopefully.

Well, not quite. The UN Human Rights Council in Geneva has adopted a resolution to set up an independent, international Commission of Inquiry to investigate all violations of humanitarian and international human rights law in the occupied Palestinian territory, with a particular focus on recent events in Gaza.

The resolution passed with only two states opposing (the USA and another of Israel’s poodles, Australia), 29 in favour, and 14 abstentions. The UK was one of those abstaining, alongside the European Union states of Croatia, Germany, Hungary and Slovakia.

Trying to explain its abstention, the UK mission in Geneva called the resolution “partial and unhelpfully unbalanced” for not “explicitly call[ing] for an investigation into the action of non-state actors such as Hamas”. The UK government then issued this feeble statement:

In addition to abstaining on today’s resolution, we call directly on Israel to make clear its intentions and carry out what must be a transparent inquiry into the IDF’s conduct at the border fence and to demonstrate how this will achieve a sufficient level of independence. This investigation should include international members. The death toll alone warrants such a comprehensive inquiry. We urge that the findings of such an investigation be made public, and if wrongdoing is found, that those responsible be held to account.

The Israeli human rights organisation B’Tselem had called the already-announced internal Israeli military probe “part of the whitewashing toolkit.” And the British government was sharply criticised in parliament for its limp-wristed attitude and reminded of Israel’s self-exoneration over the killing of four boys playing on a beach during the 2014 military offensive on Gaza.

Conservative MP Crispin Blunt, former Chair of the Foreign Affairs Select Committee, asked: “Given that Gazans did all the dying and the Israeli soldiers did all the killing, how does the minister expect an internal Israeli inquiry… to be less partial and less unhelpfully unbalanced than the inquiry mandated by the UN Human Rights Council?”

“Systematic failure by Israel to carry out genuine investigations”

The preamble to the UNHRC resolution states the reasons for action brilliantly and is worth highlighting here:

Convinced that the lack of accountability for violations of international law reinforces a culture of impunity, leading to a recurrence of violations and seriously endangering international peace,

Noting the systematic failure by Israel to carry out genuine investigations in an impartial, independent, prompt and effective way, as required by international law, into the violence and offences against Palestinians by the occupying forces, and to establish judicial accountability for its actions in the occupied Palestinian territory, including East Jerusalem,

Emphasizing the obligations of Israel as the occupying power to ensure the safety, well-being and protection of the Palestinian civilian population under its occupation in the occupied Palestinian territory, including East Jerusalem,

Emphasizing also that the intentional targeting of civilians and other protected persons in situations of armed conflict, including foreign occupation, constitutes a grave breach of international humanitarian law and international human rights law, and poses a threat to international peace and security,

Despite all that, avid Israel admirer Theresa May, barmy Boris Johnson and the insufferably gutless spivs now populating the Foreign Office still couldn’t bring themselves to support the resolution.

“To live is to resist”

Another voice from Gaza, which I shall not name, reports:

As you know we don’t have enough supply of electricity which means lots of hurdles and difficulties on all aspects of life. The conditions in Gaza are the most difficult ones in terms of the Zionist killings and aggression against the Great Marches of Return. I myself went there to the borders with my family three times and saw how their evil soldiers shooting innocent children and women. I heard some of the guys shouting that they have got nothing to lose. To live is to resist. That’s what we also teach to our students and young generations. The oppressed and occupied have got the right to resist by all means available.

It is a pity and tragic as well that the injured could not find enough medical care and nursing due to the shortage of medical staff and equipment. Can you imagine? So many causalities were sent home after receiving only first aid and some sort of dressings to their wounds as there were no enough beds and treatment for them. That’s why many have lost their legs (amputations) where the enemies are using high velocity bullets.

The shoot-to-cripple policy by Israel is nothing new. Retired trauma surgeon David Halpin, who has often worked on a voluntary basis in Gaza hospitals, drew attention to it in January 2011: “The deliberate injury of the limbs of 23 boys by high velocity weapons has been logged and described by Defence for Children International Palestine Branch (DCI-P) since March 2010.”

He pointed to the extreme poverty of large extended families which had forced boys and men to scavenge for broken concrete (gravel) in the evacuated Eli Sinai settlement and in the industrial zone by the Erez border control post at the northern end of the Gaza Strip.

The factories of the industrial zone have been progressively demolished by Israeli shelling etc… A donkey and cart, shovel, pick, sieve, muscles and courage are the tools. The rubble is used to make blocks and poured concrete with the cement that is imported largely through the tunnels. Many dozens of men and boys do this work for precious shekels in the shadow of manned watch towers and under drones above.

A leg was the target in most cases, says Halpin. And where the leg was not the target it is likely the sniper was “aiming up” so the flank, elbow etc was hit instead. “No weapons were being borne by the gravel workers, so they posed no threat to the Israeli occupation force personnel. Instead, they were bending their backs to their menial work within their internment camp.” In many cases those hit were likely to have lifelong disability. That, it seems, continues to be the Israeli regime’s sickening aim.

And to think that its chief degenerate, Binyamin Netanyahu, was allowed to set foot in London earlier this week in his never-ending quest to demonise those who stand in the way of Israel’s warmongering and expansionist ambition – namely Iran, Syria, Hamas and Hezbollah!