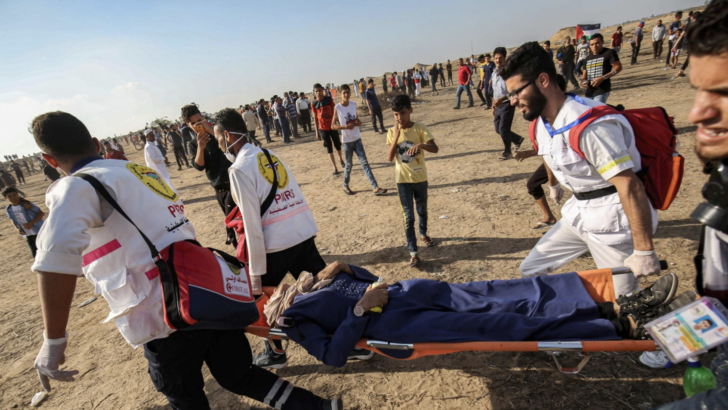 Palestinian paramedics carry a woman injured during protests along the border with Israel east of Khan Yunis in the southern Gaza strip, June 21, 2019. Credit: AFP

Alaa ad-Dali is a young man who had a dream – quite a rare thing in Gaza – and it was crushed by the IDF. What does he have left? 138 young people in Gaza have lost legs in the protests at the fence as a result of IDF sniper fire, and they aren’t even a story. Their motivations don’t interest anyone. They are all labeled “terrorists.”

Alaa ad-Dali was the Gaza cycling champion. He won the Tokyo Race twice in a row. The Tokyo Race is held in Gaza. No rider from Gaza was ever able to get to the Tokyo Race in Tokyo. At his home in Rafah, where the walls are bare of plaster, the cycling champ shows off his medals and trophies. They stand in the corner of his room. Ad-Dali has never been able to leave the cage of Gaza or compete in any other race except for the Tokyo Race in Gaza.

He used to train hard, 150 kilometers a day. The Gaza Strip is 41 kilometers long and he rode them back and forth. Ad-Dali lived and breathed cycling. He yearned to be able to participate in the Jakarta cycling competition in the summer of 2018 and to raise the Palestinian flag on the winner’s podium. On March 30, 2018, he finished his morning training, then rode to the fence to take part in the first March of Return protest. He was standing about 250 meters from the fence and watching what was going on when he was shot by an Israeli soldier.

The bullet struck him in the leg. Two days later, he awoke in the European Hospital in Khan Yunis. “I felt like my life was over. I thought about my bike and about my dream of being a cycling champion,” he told B’Tselem investigator Muhammad Sabah at the time. For nearly a week, his family tried to get him transferred to a hospital in Ramallah, where there was perhaps a chance of saving his leg. The Israeli authorities wouldn’t allow it. On April 8, the doctors in Khan Yunis informed him that his leg had to be amputated above the knee. “I’ll leave here without a leg, without a dream and without a future. My life will lose all meaning,” he told them.

He is now 21 years old. He removed one pedal from his bike and learned to ride with one leg. “The bicycle is my soul,” he says in a film clip about him produced by B’Tselem. Ad-Dali leans against a wall in order to mount his bike, then sets off riding through the dusty streets of Rafah. “The occupation achieved its goal,” he says, before he slowly disappears from sight.

One hundred thirty-eight young people in Gaza have lost legs in the protests at the fence as a result of IDF sniper fire. According to data from the World Health Organization, 30 of them are children. The sight of 138 young amputees, most of whom were unarmed and not endangering anyone’s life, is hard to imagine. The sight of 30 child amputees is a horror unto itself. Some of these limbs apparently could have been saved, had Israel not prevented access to timely treatment. As also happened in the case of fisherman Khader Sa’idi, who lost his sight after being shot in the eye for allegedly having exceeded the permitted fishing zone. In Sa’idi’s case, access to better treatment was denied on the grounds that it was not a life-saving measure. The same pretext led to the loss of any chance to save the leg of the cycling champ from Rafah.

On Friday the crowds will march to the fence once again, and again some will be wounded and killed. And Israel will remain utterly indifferent to their fate. Unarmed demonstrators who are killed by the hundred and wounded by the thousand aren’t even a story. Their motivations don’t interest anyone. They are all labeled terrorists.

To look at the heartbreaking figure of Alaa ad-Dali is to see Gaza and to see ourselves. A young man who had a dream – quite a rare thing in Gaza – and it was crushed by the IDF. What does he have left? What do his friends have left? Tomorrow, when the reports arrive about the latest wounded, I’ll think about the amputee cycling champ from Gaza.

When thousands of Israelis head out for their weekly bike rides this weekend, maybe a few of them will spare a thought for Ad-Dali, the rider from Gaza, who wanted to be like them. About his present, his future, and his chances of having something in his life.

Israeli Troops First Shot a Gaza Journalist’s Left Leg, Then His Right. And They Didn’t Stop There