You Are Here: Home → WATCH: Elizabeth Warren supports Israel during its 2014 invasion of Gaza

WATCH: Elizabeth Warren supports Israel during its 2014 invasion of Gaza 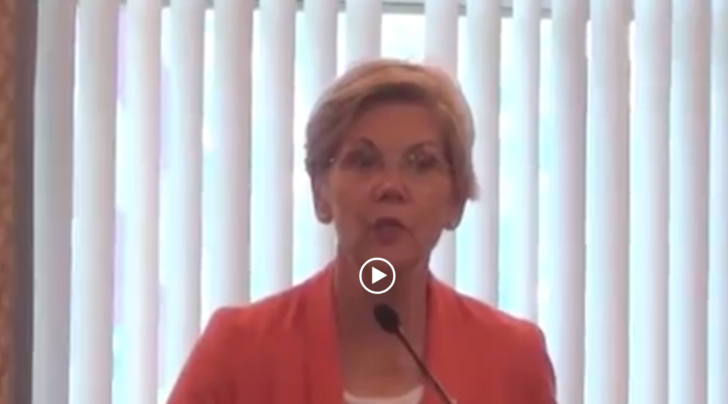 Warren voted to give Israel $225 million, on top of its over $3 billion annual aid, while it was perpetrating an invasion that killed 2,200 Gazans and left 100,000 homeless. In recent years, her views have moderated as her progressive base has become increasingly supportive of Palestinian rights. Now she often aligns with J Street rather than AIPAC. But she still co-sponsored a bill to give Israel billions of dollars…

In August 2014, Senator Elizabeth Warren (D-MA) was asked why she had recently voted for legislation to give Israel $225 million. The vote took place while Israel was in the midst of a massive invasion of Gaza that had already killed almost 600 Gazans, most of them civilians and many of them children. The money to Israel was on top of its over $3 billion annual funding.

By the end of the invasion, which Israel named “Protective Edge,” Israeli forces had killed 2,200 Gazans, the large majority of them civilians, while Gaza resistance fighters had killed 72 Israelis, 66 of them invading soldiers.

At Warren’s meeting with constituents, a Warren supporter told her he disagreed with her vote in favor of the bill. In addition to giving millions of dollars to Israel, the legislation cut millions of dollars from a proposed program to help with thousands of child immigrants.

The Cape Cod Times reported that the resident said: “We are disagreeing with Israel using their guns against innocents. It’s true in Ferguson, Missouri, and it’s true in Israel.” He pointed out that “the $225 million could have been spent on infrastructure or helping immigrants fleeing Central America.”

Israel’s Ha’aretz newspaper reports, “Warren said she had to ‘agree to disagree’ with him, and launched into pro-Israel talking points.” Warren is currently one of the front-runners for the Democratic nomination for president.

Below is Warren’s response to her constituent. The Israeli invasion was still going on at the time she spoke.

While Warren continues to be strongly supportive of Israel, receiving over $150,000 in pro-Israel PAC money, her stance has moderated as progressives have become increasingly supportive of Palestinian rights. Warren now often aligns with J Street, a pro-Israel organization that feels Israeli settlements and many Netanyahu policies hurt Israel, rather than the more hardline AIPAC (American Israeli Public Affairs Committee).

Speaking to the Reform movement’s biennial convention in December 2017, she once again toed the J Street line, criticizing the timing of Trump’s decision to move the U.S. Embassy from Tel Aviv to Jerusalem, affirming that “Jerusalem is the capital of Israel” while declaring “neither the U.S. nor any other outside power should impose a solution, and that is why I am concerned about Trump’s decision, which I believe makes it more difficult to reach that goal.”

Last year, she criticized Israel’s approach to confronting protesters on the Gaza border, stating that she was “deeply concerned about the deaths and injuries,” calling on the Israel military to “exercise restraint and respect the rights of Palestinians to peacefully protest.”

Like J Street, many of Warren’s positions continue to be predicated on what is “good for Israel.” Ha’aretz reports:

“This month, she and Sanders were the only two presidential contenders to support a proposed Senate resolution, warning that ‘unilateral annexation of portions of the West Bank would jeopardize prospects for a two-state solution, harm Israel’s relationship with its Arab neighbors, threaten Israel’s Jewish and democratic identity, and undermine Israel’s security.’

In some cases, she tries to have it both ways. Ha’aretz notes:

“In a state that enjoys extensive business ties with Israel, Warren has pleased Massachusetts’ Jewish community by clearly opposing the boycott, divestment and sanctions movement. But at the same time she has squarely opposed any proposed anti-boycott legislation, saying that making anti-Israel boycotts illegal violates the constitutional right to freedom of speech.

“Despite her friendly relations with AIPAC supporters in Boston, in March she defended Rep. Ilhan Omar with a vehemence that surprised many of her supporters, after the Minnesota congresswoman was criticized for using anti-Semitic language to attack the pro-Israel lobby.”

“Candy Glazer, a Western Massachusetts Democratic leader who has also served as an AIPAC executive committee member, is a self-described ‘friend, supporter and admirer’ of Warren, who praised her ‘strong voting record on Israel.’ Glazer has known and backed Warren since her first Senate run, when she reached out to her during a pre-campaign listening tour.”

Earlier this year, Warren co-sponsored a Senate Bill to give Israel a total of $38 billion over the next ten years, even though polls show that only 19 percent of liberal Democrats support Israel over Palestinians.

The bill also mandates that NASA work with the Israeli Space Agency, despite accusations of Israeli espionage. In 2015 a Caltech scientist revealed that the Chair of Israel’s National Committee for Space Research had illegally acquired classified information.