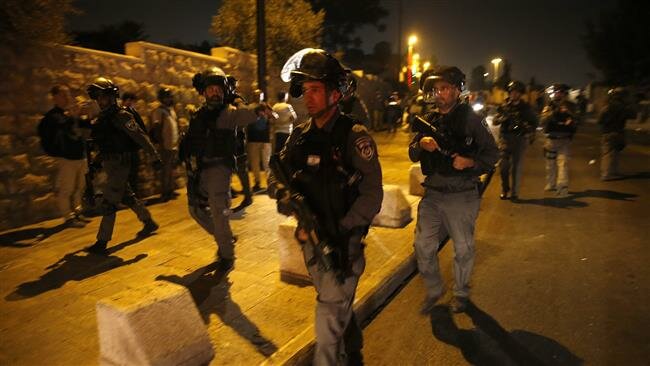 Israeli soldiers have killed one Palestinian, injured more than 95 and abducted at least 30, in ongoing invasions and serious escalation since this past Thursday, in the al-Isawiya town, in the center of occupied East Jerusalem.

Besides the ongoing invasions, and the excessive use of force against the Palestinian protesters, the army and the police have also imposed a series of sanctions and collective punishment measures against the residents, in addition to invading and ransacking dozens of homes, hospitals and clinics.

Although the invasions are more violent in al-‘Isawiya, they also targeted many other parts of occupied Jerusalem, including the Old City, and surrounding areas, and once again, the army invaded various sections of al-Makassed Hospital.

During the invasions into the hospital, the army assaulted many physicians, nurses and even patients, while the soldiers were also deployed it in various sections, and around it, looking for wounding Palestinians to abduct them.

On Thursday, June 27th, the soldiers killed a former political prisoner, identified as Mohammad Samir Obeid, 21, when they shot him with a live round in the heart, from a close range, after the soldiers assaulted and resorted to the excessive use of force against the Palestinians in al-‘Isawiya town.

After killing the young man, the soldiers took his corpse away, and are still refusing to send it back to his family for burial. They later abducted his father Samir, and his sister, Sondos. The slain Palestinian spent a total of four years in Israeli prisons, and was released a year ago, after being held for twenty months.

During the Israeli invasions into al-‘Isawiya since Thursday evening, the Palestinian Red Crescent Society (PRCS) said its medics have provided treatment to at least 95 Palestinians, including 74 who were shot with rubber-coated steel bullets, 7 who sustained fractures and bruises, and 15 who suffered the effects of teargas inhalation.

Mofeed al-Hajj, a lawyer with the Palestinian Prisoners Society (PPS) in Jerusalem, said the soldiers have abducted at least 30 Palestinians.

The abductions were also carried out amidst further collective punishment measures, including destruction of property, imposing high fines and fees, causing damage to cars, and tightening the siege and isolation of the town.

This escalation came while Israel has already been imposing sanctions and collective punishment against the Palestinians, their homes and lands, and started shortly after Israel decided to demolish homes and remove the Palestinians from their lands, to build what it called a “National Garden.”

It also came after Israel issued demolition orders targeting 16 Palestinian apartment buildings of more than 100 apartments in Sur Baher town, and similar orders targeting homes and structures in and around occupied Jerusalem.