You Are Here: Home → Israel aims to silence Palestinian journalists 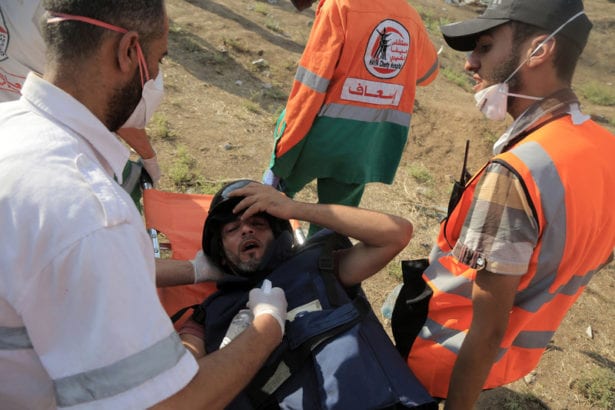 Israeli forces regularly target Palestinian journalists: shooting to kill or injure, arresting and detaining, and various forms of censorship in an attempt to control the narrative – to keep a lid on the truth.

Settler colonial enterprises aim to keep the dispossessed from documenting their experiences as part of a wider attempt to dominate and dehumanize them, to quash every element of their independence.

Israel’s violence against Palestinian journalists is one such example.

Israel violently represses journalists documenting its crimes against Palestinians – chiefly targeting Palestinian reporters but not exclusively – because narrative control is a crucial component of political control.

Between the year 2000 and September 2018, Israel killed 43 journalists in the West Bank and Gaza according to the Palestinian Center for Development and Media Freedom, MADA.

During the first six months of Gaza’s Great March of Return, a series of protests which began in March 2018, Israel carried out dozens of attacks targeting journalists. These incidents include an Israeli sniper murdering the journalist Yaser Murtaja while he stood some 350 meters from the Gaza boundary wearing a vest and a helmet clearly identifying him as a member of the press.

A week later, Israeli soldiers shot Ahmad Abu Hussein under identical circumstances; he stood several hundred meters from the boundary and was wearing a vest and helmet marking him out as a journalist. Abu Hussein underwent a series of operations but died some two weeks later.

Israel inflicted a plethora of serious injuries on Palestinian journalists during the protests. Yasser Fathi Qudih was shot in his abdomen, which led to the removal of part of his spleen. Abdullah al-Shourbaji was shot through the pelvis and lost part of his colon. Yasmin al-Naouq was shot in her back.

Dozens of journalists needed amputations as a result of their injuries.

In total, MADA found, in just two months in 2018, from 30 March, the first day of the Great March of Return, through 30 May, there were 46 injuries to journalists in Gaza from live Israeli ammunition or explosive bullets.

The high toll, MADA concludes, is a “direct result of the impunity of the Israeli occupation army and officers for the crimes they have committed in the past years.”

The Palestinian Centre for Human Rights found a further 25 injuries to journalists covering the Great March of Return between 1 May 2019 through December that year, when the protests were suspended. All injuries were attributable to Israeli forces. Five of these journalists were shot with live ammunition.

The group concludes that Israel “targeted journalists to inflict maximum harm,” journalists like Sami Jamal Taleb Misran, who was shot in the eye with a rubber-coated bullet and eventually lost sight in his eye. Misran had already survived a direct hit in the chest a week earlier, protected by his armor-plated vest.

Violence against journalists is hardly unique to Gaza and to the Great March of Return protests.

The Palestinian Centre for Human Rights chronicles 15 cases of Israeli forces injuring journalists in the West Bank in the year that the group examined, either with live ammunition, rubber-coated bullets or tear gas canisters fired directly at them.

In one case, Israeli forces shot Moath Amarneh in the eye while he was covering protests against land confiscations near Hebron. He lost his eye.

Israeli soldiers frequently assault journalists as they go about their jobs.

Fourteen journalists “were subjected to beating and other forms of violence and inhumane and degrading treatment by Israeli forces” in the year that the Palestinian Centre for Human Rights examined. These include Mashhoor Wahwah of Wafa News Agency who, in October 2019, was reporting on an Israeli incursion south of Hebron when an Israeli soldier beat him with the butt of his rifle and forced him to vacate the area.

Just a day later, Israeli soldiers physically attacked six journalists while they reported on a peaceful protest held by dozens of civilians in East Jerusalem in solidarity with Palestinian prisoners on hunger strike.

Israel arrested four of the journalists – one with Turkey’s Anadolu Agency, and the others from the Palestinian outlets Alkofiya Satellite Channel and al-Quds newspaper – and forced all other reporters to leave the area.

Israel routinely arrests and jails journalists: MADA reports that from the start of 2014 to mid-2017, there were 93 detentions and arrests of media workers and journalists.

These include 18 cases involving 15 people who were subjected to administrative detention, the practice of holding someone without charge or trial and for which Israel has been criticized by the UN.

In 2018, Israel arrested four Palestinian journalists – Ala Rimawi, Mohammad Ulwan, Husni Injass and Qutaibah Hamdan – working for Al-Quds television in the West Bank after declaring the network a “terrorist media organization” over ties to Hamas, a move condemned by the International Federation of Journalists.

Israeli soldiers also seized two vehicles and technical equipment, including a television camera, from their homes.

PCHR reports that in the year it examined, Israel detained or arrested 26 journalists “whether on duty or from their own houses … on grounds of being a journalist.”

In March 2020, Israel arrested Abdulrahman Dhaher and detained him for months without charge. A week before his arrest he’d posted a video on social media of sidewalk interviews he conducted about the history of Israel’s occupation of Gaza.

Rinawi left after the Israeli police summoned her for questioning for the eighth time in a year. Israel accused her of violating a ban on her working in Jerusalem. The police said they would jail her if she kept working for Palestine TV, which has headquarters in Ramallah and – with the important exception of Jerusalem – operates in the occupied territories.

Reporters Without Borders described Rinawi’s mistreatment as “excessive and unjustified.”

Israel censors Palestinians using a range of other tools as well.

The Palestinian Centre for Human Rights documents the ban on two newspapers, al-Resalah and Palestine, which are published in Gaza but were printed by al-Ayyam in the West Bank.

In May 2014, ahead of Israel’s bloody assault on Gaza that summer, Israeli forces raided al-Ayyam’s offices in Beitunia, west of Ramallah, to inform the owners that they would no longer be allowed to print or distribute any newspaper originating in Gaza.

Last November, Israel extended its closure of the Palestine TV bureau in East Jerusalem for six months, lengthening what was originally a 12-month ban.

The station was originally shuttered for the sin of airing “anti-Israeli and anti-Zionist content.” (Evidently, Israel grants Palestinians the right to express themselves unless what they express is ingratitude for being ethnically cleansed.)

Palestinian journalists who are citizens of Israel operate in a context that features both outright censorship and a political economy that functions as a form of censorship.

When Israel branded Al-Quds TV a “terrorist” organization because of its Hamas affiliation, the state banned the network from conducting activities either inside Israel or the West Bank. One consequence was cutting off potential work opportunities for Palestinian journalists living in Israel.

The day the ban was announced, Israeli police summoned the staff of a Palestinian media production company providing services to Al-Quds TV and questioned them for several hours.

Musawa is the sole Palestinian TV channel aimed specifically at Palestinians inside Israel. Yet it is linked to the Palestinian Authority and, according to a Musawa employee, criticism of the PA is not permissible on the network.

Meanwhile, Makan, the Arabic-language version of Israel’s national broadcaster, Kan, employs Arabs and provides higher pay and more resources than Arabic outlets in Israel. However, at Makan, terms like “occupation” and “Nakba” are prohibited.

The practice of liberation

Killing, maiming, assaulting, jailing, harassing and censoring Palestinian journalists on the scale detailed above adds up to a systemic Israeli attempt to secure control over the narratives that circulate about events across historic Palestine.

It seems likely that these relentless threats to Palestinian media workers’ livelihoods, freedom, mental and physical well-being and survival would have something of a chilling effect. Yet Palestinians persist in producing journalism of substantial volume and quality.

That their work continues is not evidence that Israel is a democracy that permits an open exchange of ideas and information.

Rather, it suggests that Palestinian journalism can be understood not only as a method of documenting facts about what Zionism means for their people but also as a means of helping preserve the capacity for Palestinians as a people to speak.

In this regard, Palestinian journalism is both a tool in the struggle for their liberation and a fleeting, lived practice of it that Israel, despite its strenuous efforts, has not succeeded in snuffing out.

Greg Shupak writes fiction and political analysis and teaches Media Studies and English at the University of Guelph-Humber. He is the author of The Wrong Story: Palestine, Israel, and the Media.