You Are Here: Home → Palestinian ingenuity makes it to Mars

Palestinian ingenuity makes it to Mars 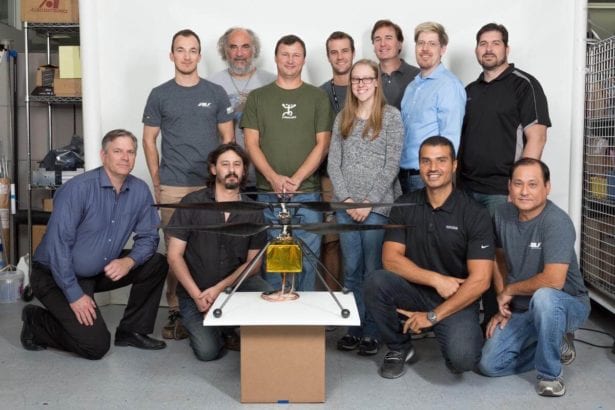 Palestinian Loay Elbasyouni, who was raised in Gaza, was part of the team behind NASA’s “historic” Ingenuity Mars Helicopter.

On February 18, 2021, I happily confirmed that my name had landed on Mars. It was laser-etched on a fingernail-sized chip attached to the rover named Perseverance, which had successfully completed its journey to the Red Planet. (Two year earlier, NASA had launched a “Send Your Name to Mars” campaign, and I along with others from around the globe had applied.)

That day I continued to hungrily read everything I could find on the Internet about the Perseverance and how it was managing in its new surroundings. On top of my joy at this accomplishment of science came another amazing surprise. My Facebook timeline was flooded with pictures of a particular individual who was a Palestinian from Beit Hanoun, a city in Gaza on its northern border — and who was the electrical and power electronics lead for the Mars helicopter that the Perseverance carried inside. I checked other social media platforms, and found the same individual appearing there as well. Loay Elbasyouni was trending in Palestine!

I honestly have trust issues with the media, so I had to verify this myself. I searched for his name and found his Instagram account. In fact, I texted him and he answered. He was super humble and supportive of my own interests in the space industry. Here is his story.

Learning on his own

Loay Elbasyouni was born in Germany to two Palestinians from Beit Hanoun. His father was a medical student and neither of his parents had German citizenship. When Loay was almost six, his family traveled back to Gaza to visit, but Israel took the papers from his father, and the family was stuck in the Gaza Strip.

Loay had to adapt to that new environment. He had to learn how to run from an Israeli military jeep and to experience sounds and scenes of occupation that children his age from other parts of the globe didn’t have to tolerate.

By the fourth grade, the first intifada broke out and his UNWRA school closed, so he started homeschooling. When his dad came home from long shifts as a surgeon, Loay tried his best to ask as many questions as he could. But mostly, he had to learn by himself. He fell in love with electronics, and he learned by building circuits and fixing broken devices.

When Loay graduated tawjihi (high school), his father wanted him to become a surgeon like himself, but the son responded, “I don’t want to live in hospitals.” At that time, the Oslo Agreement had made traveling easier than it is now, so he went to the Land of Dreams in 1998 to pursue a degree in electrical engineering from the University of Kentucky.

But the United States wasn’t so dreamy in real life; Loay had to drop out of college between 2001 and 2002 to work  up to 100 hours a week earning money to go back to school. He went to the University of Louisville to finish his bachelor’s and masters degrees in computers and electrical engineering. He has only been back to Gaza once, in 2000.

Loay worked overtime in at least five different jobs to resume his education and pay his bills. “It was a tough experience,” he says, “but it did teach me a lot” and he persevered – after all, he’s a Palestinian!

After completing his degrees, Loay started working for start-ups and private companies that specialized in electric cars and renewable energy. Back then, there was no Tesla, and these cars were a science fiction project, so most of them failed, but not Loay!

He joined a public aerospace company that offered him the opportunity to work with NASA on an experimental project to build the first aircraft to fly on Mars. The Perseverance’s helicopter evolved from the ideas, concept papers and actual construction efforts of Loay and his teammates.

Loay served as Ingenuity’s electrical and power electronics lead, which included responsibility for the propulsion system. This involved designing the motor controller, inverter, servo controller, the motor itself, and the signaling system.

A big challenge for the team was to design an electrical system that could work in Mars’s very cold and high-radiation environment. Another challenge was to figure out how to build a motor that could provide the helicopter with sufficient lift in the Red Planet’s extremely thin atmosphere. The motor needed to be as light as possible with peak endurance, power generation and efficiency.

Many considered it impossible to build a two-bladed, 1.8 kilogram (4-pound) helicopter that could obtain lift on a planet with little to no air, but Loay and his team worked tirelessly to realize their vision. The helicopter was named Ingenuity and was put into the belly of Perseverance at the last possible moment. Now it’s on the surface of Mars and about to take flight.

Ingenuity is what NASA calls a technology demonstration: it’s testing a new capability and so has a narrow mission. According to NASA, “Ingenuity features four specially made carbon-fiber blades, arranged into two rotors that spin in opposite directions at around 2,400 rpm – many times faster than a passenger helicopter on Earth. It also has innovative solar cells, batteries and other components.”

Loay told me about some of NASA’s hidden “easter eggs,” such as the binary code printed on the Perseverance’s parachute that lists the names of the team members, and the piece of fabric from the original Wright Brothers’ aircraft attached to Ingenuity.

Loay is nervous about the creation he put his fingerprints on. “All our research and experiments are theoretical,” he says, “and by one small error or something we didn’t take into consideration, years of work could be shattered to pieces on the very cold, very red planet. We want it to fly three meters off the ground to prove the possibility of flying on Mars. If it does this, it will mean we made history!”

Palestinians can do it

Loay is now working on other top-secret, breakthrough technological projects. I find Loay a success story and a role model, and many young Palestinian do as well. He finds that overwhelming, and in our Instagram chat he wished me best of luck.

Loay’s sudden fame among Palestinians started with him posting his photo with the helicopter and the team on Facebook and LinkedIn. Then his cousins spilled the beans, then his extended family, then the whole Arab World and many news agencies.

He was interviewed everywhere in the Middle East, and that made him feel good about himself, his work and his homeland in Palestine and the Arab World.

Back in Beit Hanoun, a banner was hung to welcome the great many visitors who came to congratulate the family. The love he’s received from the Palestinians has been a great gift, and he told me that his coworkers are jealous of the outpouring of support he’s received.

Loay believes that Palestinians can do whatever they dream of. Their circumstances are hard, he says, but their ingenuity and perseverance are harder. They can reach for the stars and catch them.

The first Palestinian astronaut is on the way, and the Palestine Space Agency is not just a dream. We can and we will — nothing will ever change that.

You can  follow Loay Elbasyouni on social media via: