You Are Here: Home → Israel’s ‘secret evidence’ serves as my chains, lock, and key

Israel’s ‘secret evidence’ serves as my chains, lock, and key 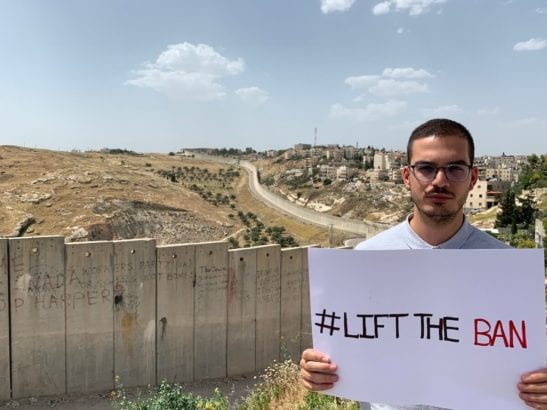 This Amnesty International worker shares his thoughts about clinging to hope while under the brutal, often indiscriminate and frivolous restrictions Israel imposes on Palestinians like himself.

Palestinians in the occupied West Bank are not allowed to travel internationally through Israel’s airport – they must cross into Jordan and fly from Amman. Israel, however, routinely imposes travel bans on Palestinians, citing ‘security reasons’ – many do not know they are banned from traveling until they arrive at the crossing. Between 2015 and 2019, Israeli NGO HaMoked filed 797 travel ban appeals, 65 percent of which were lifted. In other words, most bans are completely unjustified.

In September 2019, Amnesty International’s West Bank-based campaigner Laith Abu Zeyad was banned by Israel from accompanying his mother for medical treatment in Jerusalem. Israeli authorities subsequently even prevented him from seeing his mother before her death. In October 2019, Laith was also banned from traveling to Jordan to attend his aunt’s funeral.

In this piece, Laith reflects on a travel ban based on secret evidence and that can be extended indefinitely – a prisoner in his own land, he dreams of freedom.

I am a prisoner without a cell, a crime, or a conviction. My prison yard extends as far as what is left of my people’s lands in occupied Palestine. To go east, to Jordan, which is our only gateway to the rest of the world, there is a single bridge, one I am not allowed to cross. To go west, to other parts of the land stolen from us, and which Israel has made its own, I can only go as far as the nearest militarized checkpoint.

I have been confined to these borders drawn up by the occupiers and banned from leaving at my free will. I have not been convicted of any crime nor have I been privy to the alleged “evidence” against me. Not even my lawyer can review the secret accusations against me, so there is no way for me – or anyone – to effectively challenge the travel ban Israel imposed on me since September 2019. In this open-air prison, the laws are dictated by the jailers; prisoners have no say – not even the right to be present in court.

The court hearing to discuss my non-sentencing was held without me Why? Because Israel forbade me the permit I need to enter Jerusalem, the city on the other side of the Wall, where their courthouse is located. One of their judges, ruling based on one of their military decrees, approved this – a routine matter for a system that regularly dehumanizes us.

In my dreams, I envision myself walking a tightrope without falling, treading through the world invisibly, protected by midnight’s full darkness, transcending high above the walls and military checkpoints they have constructed, and the psychological chains they have inflicted upon us. I dream of a reality where I can lay in the sands of Jaffa’s beach and sunbathe, breathe Haifa’s air, and hug my friends in the prison that our jailers have turned Gaza into.

On this tightrope I dream of,  I balance myself in life without subjugation, confinement, and cages, but I am abruptly awakened by my reality: this tightrope is actually tightened around my wrists and ankles, and I am in a constant struggle to free myself.

The travel ban Israel imposed against me can be extended indefinitely nine months at a time, and this cycle of extension is weighing me down. By not providing me with any details or evidence as to why they have imposed a ban on me, Israel is engaging in psychological warfare. This fabrication of secrets serves as their chains, lock, and keys.

In my dream on the tightrope, my legs become more sure-footed and I have the ability to somersault and throw glitter into the air as I walk through it — finally feeling relief. I am alive. I sing and dance. But again, a disruption of the distant sound of a gunshot and a scream awakens me.

There is a vantage point from halfway on the tightrope. From there, I can both see from the rear view — the remains of hundreds of our villages, destroyed – and ahead of me, I smell the scents of a future overwhelmed by Jasmine leaves, growing from the thousands of trees we will replant by kneeling in joy and finally breathing.

I cannot control my dreams. Or my destiny. Or my thoughts. Sometimes the prisoner inside my head begins banging against the walls of my skull. I do not know what I can offer him besides endless uncertainty. Eventually, I offered him this blank page. I think that these may be his words. Our words?

There is a future, I am told. Yet freedom seems farfetched.

But I must believe. The wall, not ten minutes walk from where I was born and raised and still live — will be torn down. The closed off border will open. The tightrope, I will not fall from.

I must believe that I will live in a future where we are free from their oppression and all structural oppression, including my own society’s, because it is the only thing keeping me going.

Laith Abu Zeyad is a human rights researcher and campaigner at Amnesty International. He holds an MSc in Human Rights from the London School of Economics and Political Science and a Bachelor of Arts (BA) from al-Quds Bard College. He is from the village of al-Ezariyeh, east of Jerusalem.