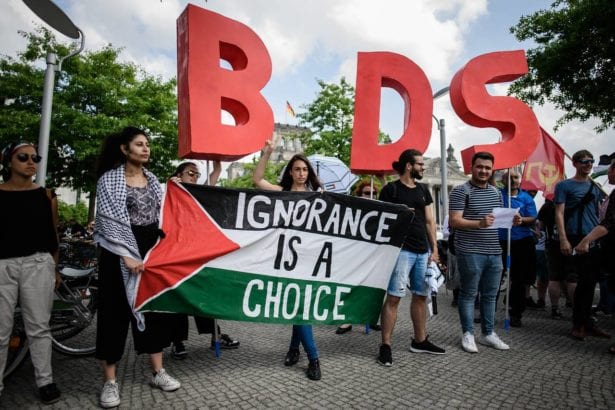 BDS returns to Congress right on schedule. (Pictured: protesters in front of the German Parliament in Berlin, June 4, 2018, hold a Palestinian flag and the initials “BDS,”referring to the movement calling for human rights for Palestinians. BDS stands for Boycott, Divest, and Sanction, and upholds the simple principle that Palestinians are entitled to the same rights as the rest of humanity.)

New Congress, same Israel partisanship. One congressperson proposed an amendment to the COVID relief bill that would refuse funding to supporters of the Boycott, Divest, Sanction (BDS) movement for Palestinian rights – during a *pandemic.*

NOTE: for almost four years, the Foundation for Middle East Peace has assembled a weekly legislative roundup, including bills, resolutions, letters, hearings and markups, and more. Their efforts have enabled Americans to closely monitor our Congress’ obsession with Israel.

This week, FMEP reported on the first piece of legislation from the new Congress, promoting impunity for Israel at the expense of freedom of speech. (Recent years have seen hundreds of national and state pieces of legislation on BDS alone, and many more pro-Israel items overall.)

Barr amendment to Covid relief bill: On 2/28, Rep. Barr (R-KY) proposed an amendment in the House Rules Committee to the “American Rescue Plan,” aka, the COVID relief bill, seeking to bar any funding in the bill from going to “any nongovernmental organization, contractor, or grantee that promotes the Boycott, Divestment and Sanctions (BDS) movements against the State of Israel.” The amendment was voted down by the Committee. Worth noting:

This amendment brings to mind the 2017 controversy when in the wake of a hurricane, it was suggested by at least one Texas city that in order to receive disaster assistance Texans were required to affirm that they do not and will not boycott Israel (and worth noting: under Texas law, boycott Israel includes boycotting settlements). Barr appears to be gleefully doubling down on and expanding this approach, seeking to make aid DURING A PANDEMIC conditional on Americans giving up 1st Amendment-protected free speech rights.

Barr also appears to be laying out a demand that has been hinted at in Congress before: to make US funding for international NGOs conditional on their rejection of BDS (so stay tuned for this same framing to be offered in other contexts).

It is worth noting that NGO Monitor [an Israel-advocacy organization] – explicitly cited by Barr in his arguments for the amendment — on 1/26/21 published a paper entitled, “Recommendations: Implementing the IHRA Definition of Antisemitism for NGO Funding.”  NGO Monitor recommends (among other things), that “The IHRA definition and accompanying examples, as markers for antisemitic rhetoric and activity, should be explicitly incorporated into Calls for Proposals and Grant Agreements as grounds for disqualification from receiving funds and termination of projects. Such conditions must be made explicit, and potential grantees must be informed of their existence.” and “Government bodies responsible for disbursing funding should develop rigorous and thorough vetting systems to guarantee that NGOs that engage in antisemitism are disqualified. These evaluations must not be limited to technical capacity, but must consider all aspects of the potential grantees’ activity, as well as any project partners.”

[As a reminder, under Trump, SecState Pompeo accused NGOs of violating the IHRA definition of antisemitism for their alleged support for/promotion of BDS, which he termed antisemitic and threatened to use as a basis for sanctions against NGOs. The IHRA definition is based on a formulation first proposed by an Israeli official that has been inserted by Israel partisans in institutions around the world.]

Video of Barr proposing this non-germane, grandstanding (and brazenly unconstitutional amendment) is here. Also see Barr’s 3/1 tweet grandstanding about the amendment: “As the @J_Insider reported this morning, House Democrats blocked my common sense amendment to prevent funds from their ‘COVID-19 relief bill’ from going to any organization that promotes the Boycott, Divestment and Sanction (BDS) Movement against Israel…The BDS Movement threatens the national security of one of our greatest allies. The United States should always stand with Israel in opposition to BDS.”

As Lara Friedman, head of FMEP, noted: “And they’re off! The competition to score pro-Israel (ostensibly) points at the expense of 1st Amendment-protected free speech has begun in the 117th Congress!”