You Are Here: Home → Netanyahu: Concern for Palestinian Rights Is “Crazy” 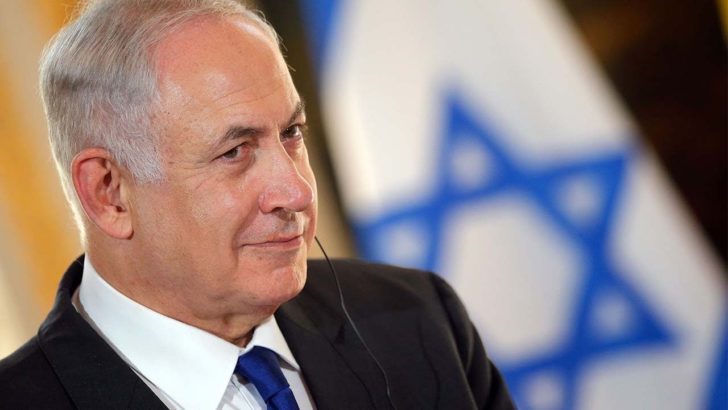 Benjamin Netanyahu is caught in a hot mic moment.

During a closed meeting that was inadvertently broadcast to journalists by an open microphone, Israeli Prime Minister Benjamin Netanyahu blasted the European Union’s approach to Israel, which conditions high levels of trade on human rights for Palestinians, as “crazy.”

by Robert Mackey, reposted from The Intercept

The Prime Minister of Israel, Benjamin Netanyahu, was caught on tape on Wednesday urging four European leaders to help him undermine a provision of a European Union trade agreement that imposes an obligation on Israel to respect the rights of the millions of Palestinians it rules in the occupied West Bank and East Jerusalem.

In private remarks to the leaders of Hungary, the Czech Republic, Poland and Slovakia that were accidentally broadcast to members of the Israeli media outside the room, Netanyahu was overheard calling it “crazy” for the E.U. to insist that Israel honor Article 2 of an association agreement signed in 1995 which makes trade with the bloc conditional on Israel’s “respect for human rights and democratic principles.”

Recordings of the Israeli leader’s comments, made by correspondents for Haaretz and Israel’s Channel 2 News, were quickly posted online.

“The European Union is the only association of countries in the world that conditions the relations with Israel,” Netanyahu said, “on political conditions — the only one!”

In recent years, Israel has destroyed hundreds of European-financed structures — including schools, playgrounds and solar panels — built to help Palestinians in the occupied territories.

Netanyahu and his ultranationalist supporters have harshly criticized European governments for providing financial support to Israeli rights groups, including Breaking the Silence and B’Tselem, which work to expose abuses by Israel’s military in the occupied territories.

The prime minister and members of his right-wing coalition government have also complained bitterly about an E.U. directive issued in 2015 to clarify that the label “Made in Israel” cannot be used for products from Israeli settlements built in the occupied territories, which are illegal according to both the Fourth Geneva Convention and the United Nations Charter.

After Netanyahu’s complaints were made public, the European Union’s delegation to Israel responded with a statement that it still expects his government to show “respect for international humanitarian law” and make progress towards a two-state solution.

1/2 #EU has deeper, broader relations with #Israel than with almost any 3rd country & we continue to advance them, economic and political

2/2 Upgrading to next level must be based on our shared values, incl. respect for international humanitarian law, steps to 2-state solution

Netanyahu’s appeal for help to the four premiers of former Soviet bloc nations — Viktor Orban of Hungary, Beata Szydlo of Poland, Bohuslav Sobotka of the Czech Republic, and Robert Fico of Slovakia — was also notable for his claim that Israel was a bulwark of “European” values in the Middle East.

“Don’t undermine that one European, Western country that defends European values and European interests and prevents another mass migration to Europe,” Netanyahu told the leaders, who have resisted the resettlement of refugees in their countries on the grounds that Muslim migrants could dilute their national character.

In his pitch, the Israeli prime minister seemed to barely sublimate an appeal to the anti-Muslim sentiment of European racists who constantly hype fears about their Judeo-Christian civilization being “overrun” by Muslim invaders.

“I think Europe has to decide if it wants to live and thrive or if it wants to shrivel and disappear,” Netanyahu said. “I am not very politically correct — I know that’s a shock to some of you. It’s a joke: but the truth is the truth.”

“We are part of the European culture,” Netanyahu added. “Europe ends in Israel. East of Israel, there is no more Europe.”

Netanyahu’s private description of Israel as part of Europe, and the recent increase in pressure on Israel from the E.U. calls to mind the analysis of the historian Tony Judt, in an interview published in The London Review of Books shortly after his death in 2010.

Asked by Kristina Boži?, “Is there anything Europe can do to exert pressure on Israel?” Judt’s reply is worth quoting at length:

Israel wants two things more than anything else in the world. The first is American aid. This it has. As long as it continues to get American aid without conditions it can do stupid things for a very long time, damaging Palestinians and damaging Israel without running any risk.

However, the second thing Israel wants is an economic relationship with Europe as a way to escape from the Middle East. The joke is that Jews spent a hundred years desperately trying to have a state in the Middle East. Now they spend all their time trying to get out of the Middle East. They don’t want to be there economically, culturally or politically – they don’t feel part of it and don’t want to be part of it. They want to be part of Europe and therefore it is here that the EU has enormous leverage. If the EU said: ‘So long as you break international laws, you can’t have the privileges of partial economic membership, you can’t have internal trading rights, you can’t be part of the EU market,’ this would be a huge issue in Israel, second only to losing American military aid. We don’t even have to talk about Gaza, just the Occupied Territories.

Why do Europeans not do it? Here, the problem of blackmail is significant. And it is not even active blackmail but self-blackmail. When I talk about these things in Holland or in Germany, people say to me: ‘We couldn’t do that. Don’t forget, we are in Europe. Think of what we did to the Jews. We can’t use economic leverage against Israel. We can’t be a critic of Israel, we can’t use our strength as a huge economic actor to pressure the Jewish state. Why? Because of Auschwitz.’ I understand this argument very well. Many of my family were killed in Auschwitz. However, this is ridiculous. Europe can’t live indefinitely on the credit of someone else’s crimes to justify a state that creates and commits its own crimes.

If Zionism is to succeed as a representation of the original ideas of the Zionist founders, Israel has to become a normal state. That was the idea. Israel should not be special because it is Jewish. Jews are to have a state just like everyone else has a state. It should have no more rights than Slovenia and no fewer. Therefore, it also has to behave like a state. It has to declare its frontiers, recognise international law, sign international treaties and agreements. Furthermore, other countries have to behave towards it the way they would towards any other state that broke those laws. Otherwise it is treated as special and Zionism as a project has failed.

People will say: ‘Why are we picking on Israel? What about Libya? Yemen? Burma? China? All of which are much worse.’ Fine. But we are missing two things: first, Israel describes itself as a democracy and so it should be compared with democracies not with dictatorships; second, if Burma came to the EU and said, ‘It would be a huge advantage for us if we could have privileged trading rights with you,’ Europe would say: ‘First you have to release political prisoners, hold elections, open up your borders.’ We have to say the same things to Israel. Otherwise we are acknowledging that a Jewish state is an unusual thing – a weird, different thing that is not to be treated like every other state. It is the European bad conscience that is part of the problem.