You Are Here: Home → Poll: 68% of Americans would reject Trump’s “Deal of the Century” 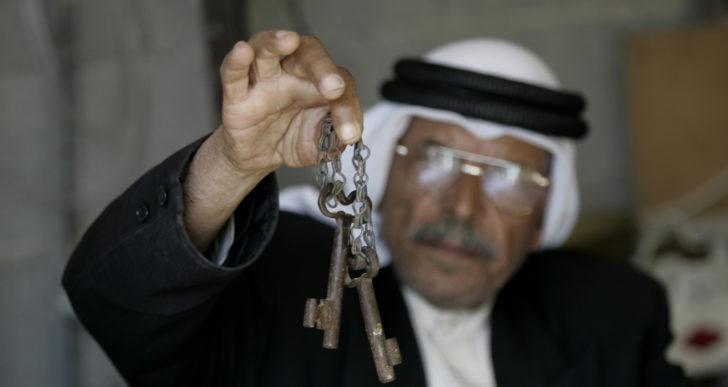 Palestinian refugee Shaher Al-Khatib, 71, holds a handmade symbolic key to his family houses left by relatives in 1948. The key is the Palestinian symbol of the right of return to their ancestral homes which they lost during the creation of the state of Israel in 1948. (AP/Majdi Mohammed)

When Americans were asked hypothetically whether they’d prefer the right of return after expulsion, or an economic development plan, 68% chose return.

Palestinian government officials have broken off contact with the Trump administration since its December 2017 recognition of Jerusalem as Israel’s capital and relocation of the U.S. Embassy from Tel Aviv to Jerusalem. They did not attend the conference, but some Palestinian businesspeople did.

It is unlikely the Trump administration’s upcoming “Political Plan”—which has been written but not released—will recognize the Palestinian right to return or establish a Palestinian state within pre-1967 borders with East Jerusalem as the capital. The U.S. negotiating team members are essentially Israeli hardliners in all but domicile. Special Envoy for International Negotiations Jason Greenblatt recently referred to illegal ­Israeli West Bank settlements as “neighborhoods and cities” that are not an obstacle to peace.

To gauge U.S. public opinion about the “Peace to Prosperity” plan, IRmep put a national sample of American adults in the shoes of Palestinian refugees, notably the 750,000 forcibly expelled during Israel’s creation and their descendants living in Gaza, West Bank, Jordan, Lebanon and Syria. When asked the purposefully ambiguous question, “If you were expelled & resettled into a resource restricted area, would you fight to return or forfeit legal claims for a new life under a promised economic development plan?” a solid 68 percent of Americans said they would fight to return.

Grant F. Smith is the director of the Institute for Research: Middle Eastern Policy in Washington, DC. For more IRmep polls, visit https://IRmep.org/Polls.

WATCH: Deal of the Century