You Are Here: Home → Poll: 75% of Americans Oppose Outlawing Boycotts of Israel 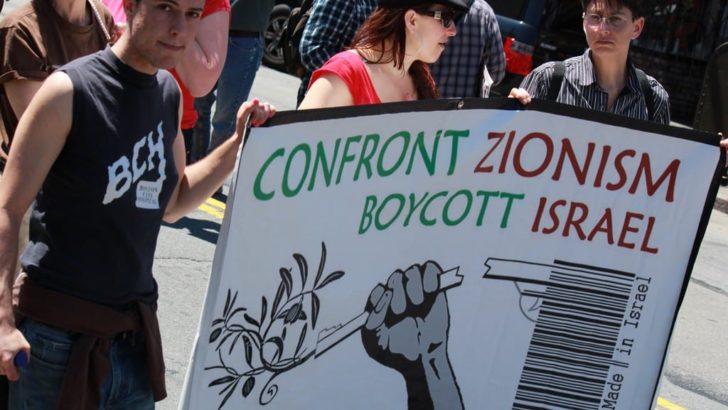 Illustrative photo of signs calling for the boycott of Israel at an anti-Israel protest in San Francisco, April 2011 (CC BY-dignidadrebelde, Flickr)

Americans in general do not like anti-BDS laws nearly as much as Congress does: just 22.5% of American adults polled favor anti-boycott measure. But Washington and many state legislatures are pushing through legislation that would criminalize boycott of Israel.

New legislation passed in the Senate seeks to legalize the right of individual state governments to force American companies to certify they won’t engage in economic boycotts of Israel as a condition for receiving government contracts.

The “Combating BDS Act of 2019” is embedded as Title IV within the ‘‘Strengthening America’s Security in the Middle East Act of 2019’’ (S.1). If signed into law, S.1 would allow states to withhold government funding from entities unwilling to certify they will not boycott Israel. Most existing state anti-BDS measures require pledge forms that contractors must sign as a condition for winning or renewing contracts.

Late in 2018, Senator Ben Cardin, a leading recipient of Israel lobby campaign contributions, attempted to include the Israel Anti-Boycott Act in must-pass spending legislation. The effort was stymied by the government shutdown.

In 2017 Cardin co-sponsored legislation seeking to amend a swath of U.S. laws to outlaw boycotts of Israel. That earlier “Israel Anti-Boycott Act” legislation was also broadly unpopular. 69% of Americans opposed its harsh individual penalties which could have fined Americans up to $1 million or jailed them for up to 20 years. The earlier version also clumsily inserted Israel into laws authorizing US national and economic emergency response.

At least 25 states – many quietly lobbied by local Israel advocacy organizations – have now passed their own laws or started enforcing gubernatorial executive orders prohibiting the flow of state contracts to any business unwilling to sign pledges not to boycott Israel. They also ban compliant contractors from transferring state funding on to subcontractors unwilling to sign such pledges. But some are beginning to fight for their right to boycott as speech protected by the 1st Amendment.

Esther Koontz prevailed in a freedom of speech lawsuit against the state of Kansas which attempted to insert an anti-boycott pledge into her contract to train math teachers. Bahia Amawi sued the state of Texas after refusing to sign an anti-boycott waiver and then losing her contract as a speech pathologist. IT contractor and former Maryland state representative Saqib Ali in January sued over lost business opportunities state of Maryland Governor Larry Hogan and Attorney General Brian Frosh under Hogan’s anti-BDS executive order over.

Not all such 1st Amendment lawsuits have prevailed. In January, Arkansas Judge Brian Miller dismissed a case filed by the Arkansas Times challenging the state’s anti-BDS law after the newspaper refused to sign waivers as a condition to receive state-funded university ads.

Acknowledging his ruling diverged from federal precedents, the presiding judge found that boycotts are not, in fact, protected by the First Amendment. The Arkansas legislature – which like other state bodies and the Congress is under constant pressure of local and national Israel advocacy organizations – was poised during the lawsuit to undertake modifications to its law until something unchallengeable in court finally emerged.

However, their intense behind-the-scenes support of unpopular anti-BDS measures have put some Israel advocacy organizations under an uncomfortable spotlight. The office of Virginia Governor Ralph Northam released under state sunshine laws in 2018 hundreds of pages of records detailing the questionable activities of the Virginia Israel Advisory Board. VIAB is an opaque taxpayer-funded state entity launched in 1996 that works independently of the commonwealth’s economic development board to secure lucrative opportunities for Israeli businesses. In 2016-2018 VIAB executed a complex reconstitution to hire a new anti-BDS director from Israel – by diluting the governor’s right to influence VIAB’s leadership appointments. A broad coalition of state human rights organizations – the Virginia Coalition for Human Rights – is now calling for a cutoff in all funding to VIAB and an audit of its activities.

In addition to anti-boycott measures S.1 also includes loan guarantees and Israeli access to prepositioned stockpiles of US weapons Israel can use in the event of regional conflict. S.1 augments Israeli access to US space technology, missile defense and anti-UAV support. The measure also expresses opposition to US withdrawals from Syria which the Israeli government strongly opposes.

Poll methodology and information about RMSE as a sampling error benchmark, raw data and demographic filters are available from Google.

Grant F. Smith is the director of the Institute for Research: Middle Eastern Policy in Washington and the author of the 2016 book, Big Israel: How Israel’s Lobby moves America which is now available as an audiobook.

Israel has starring role in H.R.648, “Consolidated Appropriations Act of 2019”