You Are Here: Home → This is Israeli politics: killer Elor Azaria is one candidate’s ally

This is Israeli politics: killer Elor Azaria is one candidate’s ally 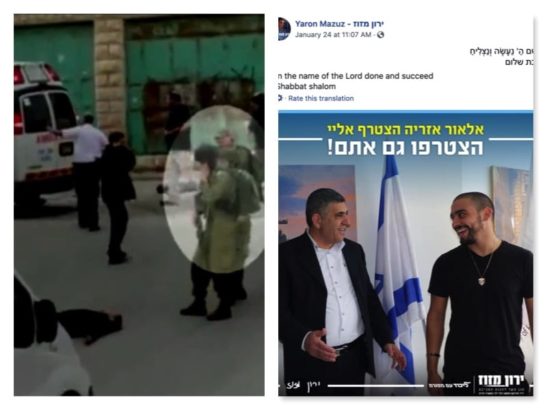 Elor Azaria, the Israeli soldier charged with manslaughter after shooting a wounded Palestinian in the head, now has a paid position on the political campaign of an Israeli Prime Minister candidate.

Azaria served 14 months for the killing. He returned to Hebron a folk hero and celebrity.

An Israeli deputy minister has recruited former soldier and convicted killer Elor Azaria in a campaign video ahead of Likud party primaries scheduled for 5 February, reported the Jerusalem Post.

Deputy Environmental Protection Minister Yaron Mazuz posted a video on his Facebook page yesterday showing him seated next to Azaria.

“I am sitting next to my friend Elor Azaria, whom we enlisted to our primaries campaign, and with God’s help, together with him, we will succeed,” Mazuz tells the camera.

According to the report, the video ends “with a picture of Mazuz and Azaria, who appeared to be laughing together”.

Israel’s Channel 12 reported that Mazuz gave Azaria a paid position on his campaign, and called him “intelligent and diligent”.

“We have to support our soldiers and let them act according to the threats they face in the battlefield,” Mazuz told Channel 12. “We cannot tie their hands and neuter them when facing vile murderers.”

In March 2016, Azaria shot wounded Palestinian Abdel Fatah Al-Sharif in the head in Hebron, in the occupied West Bank. He eventually served just 14 months of an 18-month manslaughter sentence.

Azaria became a popular cause for a number of right-wing Israeli politicians and groups, with rallies in support of the soldier.