You Are Here: Home → “He can’t breathe”: a Palestinian Eric Garner 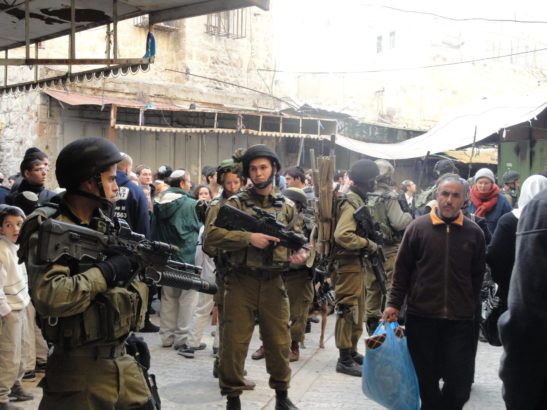 Each week, settler-organized tour groups walk through the old city of Hebron, accompanied by a large number of fully armed Israeli military soldiers who clear the path for the settlers and tourists and stop all movement in the old city. This is standard procedure as all Israeli citizens have the right to protection by the Israeli military.

As Palestinians in Hebron navigate life without the Temporary International Presence in Hebron (TIPH) observers, it is worth looking back on how oppressive and violent life was even with outsiders watching. Eric Garner would find the city eerily familiar.

Hebron is an ancient city in the West Bank of the Occupied Palestinian Territories with a population of about 220,000 Palestinians and less than 1,000 Jewish settlers.

About 1,000 Israeli soldiers are charged with “keeping the peace,” a job at which they have consistently failed – or so one would suppose, given that for 22 years the city has been obliged to host the TIPH (Temporary International Presence in Hebron).

TIPH observers were mandated by the UN as part of the Oslo Accords to witness and chronicle abuse of Palestinian residents by both Israeli settlers – who reside on the land illegally – and Israeli soldiers.

During their two decades in Hebron, TIPH documented about 40,000 separate cases of abuse, some of which may be war crimes. When their report was leaked in December, Israel’s sin was laid bare for all to see.

No one lifted a finger – except for Israeli Prime Minister Benjamin Netanyahu.

Netanyahu did not launch an investigation into the soldiers’ actions or call out the settlers. He fired TIPH.

“We will not allow the continuation of an international force that acts against us,” Netanyahu said with a straight face. (It’s an election year.)

Still we yawned – except for the United Nations Security Council, which attempted to pass a resolution expressing “regret” at Israel’s decision. The US vetoed it.

And here’s the kicker: this is 5 cases a day WHILE INTERNATIONAL OBSERVERS WERE PRESENT.

And now the international observers are gone.

What will it take for us to awaken from our coma of compliance?

Garner protested, asserting that “every time you see me you want to mess with me.” I’m tired of it…I’m minding my business. Please just leave me alone.”

Garner was put in a chokehold and wrestled to the ground. His last words, “I can’t breathe,” became a rallying cry for black lives. 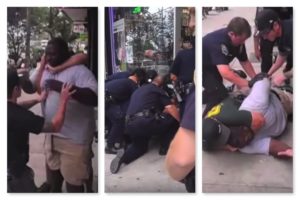 In Hebron, Palestine on May 17th, 2017, Israeli Defense Forces (IDF) surrounded M as he walked through a market. He was about to join the roughly 40% of the male Palestinian population who, since 1967, have been detained or arrested.

M struggled to break free from the crowd of soldiers; when he was put in a chokehold, he struggled for air. The international observer who was filming the incident said again and again, “he can’t breathe.” 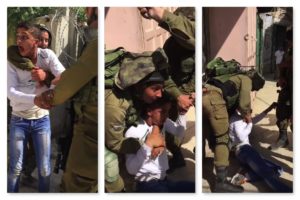 When he was taken away by the Israeli soldiers, Christian Peacemaker Teams reports that he was blindfolded, handcuffed, and” threatened with death if his younger brother didn’t turn himself in.” M’s older brother was already in prison.

The US vetoed a UN resolution expressing regret over the dismissal of those who would bear witness to this brutality.

WATCH THIS VIDEO OF M’S ARREST. THIS IS WHAT HAPPENED FIVE TIMES A DAY FOR 20 YEARS IN THE PRESENCE OF INTERNATIONAL OBSERVERS.

Eric Garner’s arrest and M’s were similar in many ways; they also had significant differences. Here are just a few observations, in no particular order:

The chatty IDF soldier on the video of M’s arrest told the international observer who was filming, “We don’t play games” as he marched the gasping young man to the jeep (in case the combat helmet, body armor, walkie-talkie, and other accoutrements didn’t tip her off).

Rev. Al Sharpton’s statement at Garner’s funeral would apply equally to M’s case and the other 4 incidents in Hebron that day, and 5 the next day and the next day. He exclaimed,

Indeed, these are not games. These are lives. They matter.

B’Tselem: Soldiers drag 8-year-old from house to house in Hebron for over an hour in search of stone-throwers [Video]