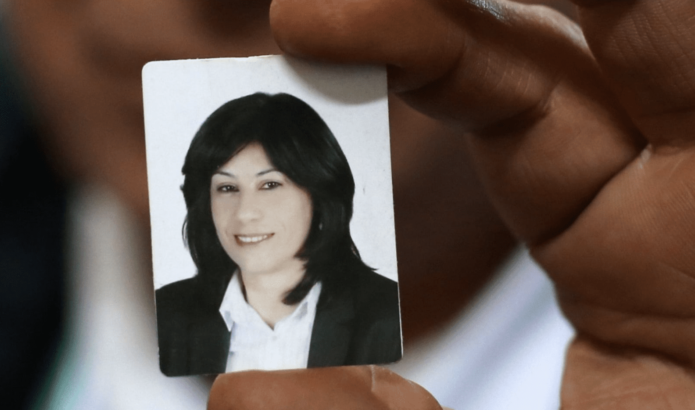 Ghassan Jarrar, the husband of Khalida Jarrar, holds a portrait of her on April 2, 2015 at their home in the West Bank city of Ramallah. Credit: AFP PHOTO / ABBAS MOMANI

Palestinian lawmaker Khalida Jarrar has been incarcerated in an Israeli jail without a trial for 20 months. Another period of ‘administrative detention’ will soon expire. Her husband prepares for her return, but knows it might not happen.

Ghassan Jarrar says his life is meaningless without Khalida. In his office at the children’s toys and furniture factory he owns in Beit Furik, east of Nablus, its chairs upholstered with red fake fur, the face of the grass widower lights up whenever he talks about his wife. She’s been incarcerated in an Israeli prison for 20 months, without trial, without being charged, without evidence, without anything. In two weeks, however, she could be released, at long last. Ghassan is already busy preparing himself: He knows he’s liable to be disappointed again, for the fourth successive time.

Khalida Jarrar is Israel’s No. 1 female political prisoner, the leader of the inmates in Damon Prison, on Mt. Carmel, and the most senior Palestinian woman Israel has jailed, without her ever having been convicted of any offense.

The public struggle for her release has been long and frustrating, with more resonance abroad than in Israel. Here it encounters the implacable walls of the occupation authorities and the startling indifference of Israeli public opinion: People here don’t care that they’re living under a regime in which there are political prisoners. There is also the silence of the female MKs and the muteness of the women’s organizations.

Haaretz has devoted no fewer than five editorials demanding either that evidence against her be presented or that she be released immediately. To no avail: Jarrar is still in detention and she still hasn’t been charged.

She’s been placed in administrative detention – that is, incarceration without charges or a trial – a number of times: She was arrested for the first time on April 15, 2015 and sentenced to 15 months in jail, which she served. Some 13 months after she was released from that term, she was again put under administrative detention, which kept getting extended, for 20 consecutive months, starting in mid-2017: two stints of six months each, and two of four months each.

The latest arbitrary extension of her detention is set to end on February 28. As usual, until that day no one will know whether she is going to be freed or whether her imprisonment will be extended once again, without explanation. A military prosecutor promised at the time of the previous extension that it would be the last, but there’s no way to know. Typical of the occupation and its arbitrariness.

In any event, Ghassan is repainting their house, replacing air conditioners and the water heater, hanging new curtains, planting flowers in window boxes, ordering food and sweets in commercial quantities, and organizing a reception at one checkpoint and cars to await her at two other checkpoints – you can never know where exactly she will be released. A big celebration will take place in the Catholic church of Ramallah, which Ghassan has rented for three days on the last weekend of the month. Still, it’s all very much a matter of if and when.

Reminder: On April 2, 2015, troops of the Israel Defense Forces raided the Jarrar family’s home in El Bireh, adjacent to Ramallah, and abducted Khalida, a member of the Palestinian Legislative Council.

She was placed in administrative detention. In the wake of international protests over Israel’s arrest without charges of a lawmaker who was elected democratically, the occupation authorities decided to try her. She was indicted on 12 counts, all of them utterly grotesque, including suspicion of visiting the homes of prisoners’ families, suspicion of attending a book fair and suspicion of calling for the release of Ahmad Saadat, a leader of the Popular Front for the Liberation of Palestine who has been in prison for years.

The charge sheet against Jarrar – an opponent of the occupation, a determined feminist and a member of the Palestine Liberation Organization’s executive committee – will one day serve as the crushing proof that there is not even the slightest connection between “military justice” and actual law and justice.

We saw her in the military court at Ofer base in the summer of 2015, proud and impressive, as her two daughters, Yafa and Suha, who returned from their studies in Canada after their mother’s arrest, wept bitterly with their father on the back benches of the courtroom. No one remained indifferent when the guards allowed the two daughters to approach and embrace their mother, in a rare moment of grace and humanity, as their father continued to cry in the back. It was a scene not easily forgotten.

Three months ago, she was transferred, along with the other 65 female Palestinian prisoners, from the Sharon detention facility where she’d been incarcerated to Damon, where the conditions are tougher: The authorities in Damon aren’t experienced in dealing with women and their special needs, Ghassan says. The showers are separate from the cells, and when a prisoner is menstruating, the red fluid flows into the yard and embarrasses the women. But at the same time, he says, the prison authorities are treating Khalida’s health situation well: She suffers from a blood-clotting problem and needs weekly medications and tests, which she receives regularly in her cell.

“I breathe Khalida instead of air”

“You are my sweetheart” is inscribed on some of the synthetic-fur toys in the production room in Beit Furik. There are dolls of Mickey Mouse and of other characters from the cartoon world, sporting bold colors, along with padded rocking chairs and lamps for children’s rooms, all designed by Ghassan and all bespeaking sweet innocence and creativity. He’s devoted much less time to his factory since his wife’s incarceration. Of the 19 employees he had, only seven remain, one of whom, a deaf woman, is his outstanding worker. It’s a carpentry shop, an upholstery center and a sewing workshop all under one roof. Ghassan sells most of his products to Israel, although he’s been denied entry to the country for years.

Now his mind is focused on his wife’s release. The last time he visited her in prison was a month ago, 45 minutes on a phone through armor-plated glass. During her months in prison, Jarrar became an official examiner of matriculation exams for the Palestinian Education Ministry. The exam papers are brought to the prison by the International Red Cross. Among others that she has graded were Ahed Tamimi and her mother, Nariman. Ahed called Ghassan this week to ask when Khalida’s release was expected. She calls her “my aunt.”

The clock on the wall of Ghassan’s office has stopped. “Everything is meaningless for me without Khalida,” he says. “Life has no meaning without Khalida. Time stopped when Khalida was arrested. Khalida is not only my wife. She is my father, my mother, my sister and my friend. I breathe Khalida instead of air. Twenty months without meaning. My work is also meaningless.”

A business call interrupts this love poem, which is manifestly sincere and painful. What will happen if she’s not released, again? “I will wait another four months. Nothing will break me. I don’t let anything break me. That is my philosophy in life. It has always helped me.”

Ghassan spent 10 years of his life in an Israeli prison, too. Like his wife, he was accused of being active in the PFLP.

In the meantime, their older daughter, Yafa, 33, completed her Ph.D. in law at the University of Ottawa, and is clerking in a Canadian law firm. Suha, 28, returned from Canada, after completing, there and in Britain, undergraduate and master’s degrees in environmental studies. She’s working for the Ramallah-based human rights organization Al-Haq, and living with her father.

Both daughters are mobilized in the public campaign to free their mother, particularly by means of the social networks. Khalida was in jail when Yafa married a Canadian lawyer; Ghassan invited the whole family and their friends to watch the wedding ceremony in Canada on a large screen live via the Internet. Ghassan himself is prohibited from going abroad.

During Khalida’s last arrest, recalls her husband, IDF soldiers and Shin Bet security service agents burst into the house by force in the dead of night. They entered Suha’s room and woke her up. He remembers how she shouted, panic-stricken at the sight of the rifles being brandished by strange men in her bedroom wearing black masks, and how the soldiers handcuffed her from behind. As Ghassan replays the scene in his mind and remembers his daughter’s shouts, he grows distraught, as if it had happened this week.

Not knowing know what the soldiers were doing to her there, and only hearing her shouts, he tried to come to his daughter’s rescue, he recalls. He says he was almost killed by the soldiers for trying to force his way into Suha’s bedroom.

After the soldiers took Khalida, preventing Ghassan from even kissing her goodbye, despite his request – he discovered his daughter, bound by plastic handcuffs. After he released her, she wanted to rush into the street to follow the soldiers and her captive mother. He blocked her, and she went to the balcony of the house and screamed at them hysterically, cries of unfettered fury.

Last Saturday was Khalida’s 56th birthday. It wasn’t the first birthday she’d spent in prison, maybe not the last, either. Ghassan’s face positively glows when he talks about his wife’s birthday. He belongs to a WhatsApp group called “Best Friends” that is devoted to Khalida, where they posted his favorite photograph of her, wearing a purple blouse and raising her arms high in the courtroom of the Ofer facility. The members of the group congratulated him. Umar quoted a poem about a prisoner who is sitting in his cell in complete darkness, unable even to see his own shadow. Hidaya wrote something about freedom. Khamis wrote a traditional birthday greeting, and Ghassan summed up, “You are the bride of Palestine, renewing yourself every year. You are the crown on my head, al-Khalida, eternal one.”

Surveillance, Political Threats, Daily Discrimination: What It’s Like to Be a Palestinian Citizen in Israel