You Are Here: Home → After expulsion of West Bank observer force, Palestinians fear the worst 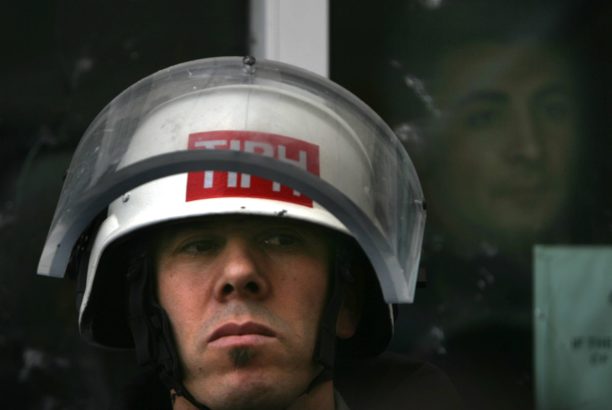 An employee of the Temporary International Presence in the West Bank city of Hebron February 2006. (AFP PHOTO/PEDRO UGARTE)

The Temporary International Presence in Hebron (TIPH) has observed and documented Israeli violations of international law for 22 years – from both Israeli settlers and the Israeli military. PM Netanyahu has cancelled their mandate following a leaked TIPH report of widespread abuse by both the settlers and the military.

Palestinians fear the worst without the watchful eye of TIPH; Israeli settlers say it will be “a breath of fresh air.”

by Mary McAuliffe, i24 News

On February 25, 1994, off-duty reserve soldier Baruch Goldstein donned his Israeli army uniform and entered a mosque in the West Bank city of Hebron, opening fire on hundreds of Muslims at prayer during the Islamic holy month of Ramadan.

The massacre and its aftermath claimed the lives of more than 50 Palestinian civilians and injured several hundred others; ten Jews were killed in the massacre’s turbulent wake, including Baruch Goldstein who was bludgeoned to death after worshippers at the Ibrahimi mosque in the Cave of the Patriarch compound eventually managed to overpower him.

The events of that lethal February day and the ensuing clashes remain ingrained in the memory of the residents of Hebron, where nearly 1,000 Israeli settlers live amongst some 40,000 Palestinians in the city’s flashpoint H2 area.

Heavily guarded by a large Israeli military contingency, the settler presence in the Palestinian city of 200,000 has turned Hebron into a microcosm of the Israeli-Palestinian conflict, encapsulating the enduring tensions and diminishing hopes for peace held by both the city’s Jewish and Arab occupants.

For Hebron’s Palestinian residents, Israeli Prime Minister Benjamin Netanyahu’s recent decision to end the mandate of an international observer force that has watched over the city for more than 20 years has further eroded confidence that any sort of peace process will put an end to division and violence.

For 22 years, Palestinians have welcomed the presence of the Temporary International Presence in Hebron (TIPH) as a necessary force for safeguarding their well-being in a city gripped by tension and whose adversaries are protected by the Israel Defense Forces (IDF).

Jewish settlers in Hebron, however, spent years lobbying for their removal, having long reviled the international force which they see as a nuisance and an unbiased observer to their presence in the city.

Accusing TIPH of “acting against Israel,” Netanyahu’s unceremonious ousting of the observers via Twitter sparked condemnation from the Palestinian government and TIPH’s contributing countries, particularly Norway and Turkey, which alleged that the decision represents a departure from and potential breach of the landmark Oslo peace accords.

The controversial decision followed the leak of a confidential TIPH report by Israeli daily Haaretz revealing alleged widespread abuses by Israeli forces and settlers. Shortly after the highly critical report – the first time a TIPH report was publicized in their 22 years of operation – Netanyahu canceled their mandate.

The TIPH’s creation stemmed from the widespread fear that the eruption of violence in Hebron in 1994 would destroy what was at the time an ongoing peace process between Israel and the Palestinians, after the signing of their first mutual agreement in the 1993 Oslo I Declaration of Principles.

In 1997, the Israeli government and representatives of the Palestinian Liberation Organization agreed to the formation of an international presence in Hebron to monitor and report on violations of the Hebron Protocol which defined the rules regarding the Israeli presence in the majority Palestinian city.

According to the agreement, the observer force — coordinated by Norway and reinforced by workers from Italy, Denmark, Sweden, Switzerland and Turkey — required its mandate renewed by both parties every three months.

Netanyahu’s decision to end the force’s mandate was swiftly condemned by the Palestinian government and the foreign ministers of TIPH contributing countries, who warned that to this day the situation in Hebron remains tense and fragile.

But Israeli analysts insist that the state acted within its rights in ending the TIPH mandate.

Eugene Kontorovich, a professor of international law and the Israeli-Palestinian conflict, stressed that the 1997 agreement which established the observer force in essence ends its mandate every three months.

“Not renewing the mandate is not violating the Oslo Accords. It is actually implementing it,” Kontorovich argued, adding that Norway is “exacting backwards” by alleging that TIPH’s removal represents a violation of Oslo.

Dismissing the European and Turkish allegations, Alan Baker of the Jerusalem Center of Public Affairs, an Israeli diplomat and lawyer involved in the Oslo negotiations, outlined key outlined key aspects of the TIPH presence that justify Israel’s decision not to extend the mandate.

“In principle, the Oslo Accords are not defined as an international treaty since they are not between two sovereign states. As such, the accords are a sui generis agreement – a unique document – that doesn’t enter into international definitions,” he told i24NEWS, adding that nonetheless, like any agreement, both parties “are obliged to implement and not breach its provisions.”

“Since its [TIPH’s] establishment, both Turkey and Norway have become countries that maintain hostility vis-à-vis Israel, and as such, cannot play an objective role as members of TIPH. The hypocrisy of the Norwegians is quite blatant. As signatories to the Oslo Accords as witness, they have never considered the Palestinian violations of the accords as breaches.”

Also affirming Israel’s right not to extend the mandate, international relations expert and i24NEWS contributor Dr. Emmanuel Navon similarly defended the decision based on the status of Turkey as a contributing country.

“The fact that TIPH contains Turkish security forces was not an issue when Israel agreed to it in 1997. Back then, Israel and Turkey were regional partners. Today, by contrast, Turkey’s foreign policy is openly hostile to Israel,” he said.

Nonetheless, the decision to oust TIPH could still have a symbolic impact on the future of the Israeli-Palestinian peace process.

Divided reactions from a divided population

Both Jews and Arabs in Hebron say they expect a significant shift in the lives of residents following TIPH’s exit.

Issa Amro, a Palestinian resident of Hebron and prominent human rights activist told i24NEWS that he fears another Ibrahimi massacre amid concern that TIPH’s departure will lead to a rise in violence by Israeli settlers and soldiers.

“Settlers have their own police, their army and institutions. They have a real country and a system to give them their rights and protect them. Who is doing this for us? Who is giving us even the minimum feeling of safety here?” Amro said, noting that the TIPH helped balance the equality of protection and rights under a system where they are not considered equal to the Jewish residents.

The move has also exacerbated Palestinian fears that the Israeli government will continue to act to expand settlements in Hebron, confiscating Palestinian homes in the process, Amro says.

“Far-right extremists have decided amongst themselves that Oslo is finished, the Hebron Protocol is finished, and it is now time to annex the West Bank,” Amro cautions.

Denying criticisms of TIPH bias, Amro insisted the primary objective of force was to protect the Palestinian people and document abuses.

“For me the main aim is not to have the TIPH. The main aim is to feel safe and feel protected. The TIPH does nothing to harm Israeli settlers, they [TIPH] are against violence and they are not political. Their mission is to write confidential reports.”

For the Jewish settlers, however, the difference post-TIPH is expected to be “a breath of fresh air” representing the departure of “overtly anti-Israel organizations,” says David Wilder, a Hebron resident and Jewish settlement activist.

“We don’t need people here to stabilize the situation and watch over us here. Their presence has been very destabilizing,” Wilder claimed, insisting that their reportage of what happens in Hebron is one-sided and harbors bias against the Jewish community.

Wilder was also unmoved by accusations by critics that the expulsion of the TIPH was a political move by Prime Minister Netanyahu who saw the opportunity to win votes from far-right Jewish settlers ahead of national elections in April.

“Nobody can argue with the fact that in a couple of months there are going to be elections, and that Netanyahu is doing his most to garner support from Judea and Samaria,” Wilder told i24NEWS, using a biblical term to refer to the West Bank.

Regardless, he said the settlers welcomed Netanyahu’s move, insisting that the TIPH presence infringed on the sovereignty of Israel.

The end of TIPH will give Hebron settlers more freedom from oversight and from international observers who for decades have been tasked with mitigating conflict and monitoring Israeli policy in the contentious West Bank where two divergent populations continue to fight for their rights to the same land.

Despite seemingly insurmountable differences, Jewish and Palestinian residents of Hebron can agree on one thing: the expulsion of the international observer force is a huge victory for the religious settlers in the West Bank and the legitimization of settlements widely considered illegal under international law.

Mary McAuliffe is a journalist and breaking news editor for the i24NEWS English web desk.