You Are Here: Home → IRMEP Poll: Most Americans Aren’t Zionists But Democratic and Republican Party Platforms Are 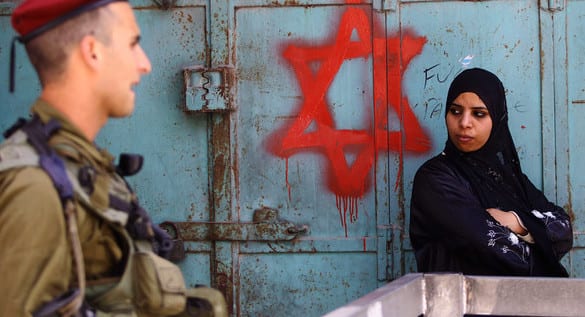 An Israeli soldier keeps guard at an army checkpoint in the center of Hebron, May 18, 2009.

An unprecedented poll reveals the gaping void between American identification with Israel and the official positions taken by both major political parties.

A majority of American adults – 70.3 percent – do not consider themselves Zionists when defined as “A Zionist is a person who believes in the development and protection of a Jewish nation in what is now Israel.” Only 24.9 percent say, “I consider myself a Zionist” while 4.8% provided other responses.

The IRmep poll was fielded by Google Consumer Surveys June 15-18 to a representative sample of 1,030 American adult Internet users.

In contrast to their constituents, members of both major US political parties have long operated under overwhelmingly Zionist party platforms. The 2016 Democratic party platform references Israel 9 times. Republican party platform 19. They differ little on the key issues: 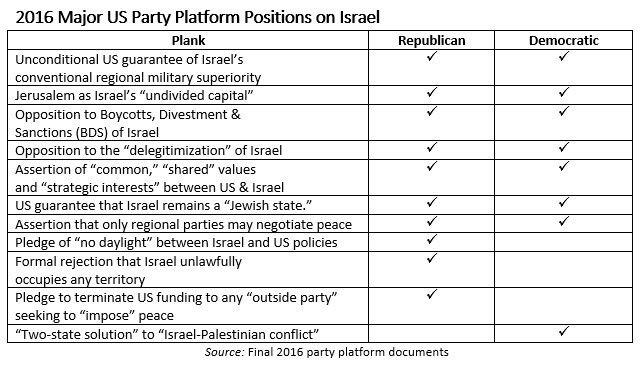 Other recent polling reveals the enormous divide between the views of Americans and the actions taken by their members of Congress. Americans are strongly opposed to massive, disproportionate, unconditional US foreign aid to Israel. They want Congress to consider Israel’s status as the region’s sole nuclear power. They would renegotiate or cancel the lopsided 1985 trade deal. They oppose relocation of the US embassy to Jerusalem, as well as the policy of “no-daylight” US coordination with Israel.

Yet most members of Congress strongly support these initiatives, including recent formal condemnations of the United Nations as inherently “anti-Israel” and ongoing attempts to outlaw grassroots boycotts of Israel over its endemic human rights abuses.

What maintains the immense void between the views of most Americans and their elected representatives? The Israel lobby.

Zionism completely took over what were formerly Jewish social welfare organizations during the years leading up to WWII. Since the 1960s, representatives of the American Israel Public Affairs Committee (AIPAC), which channels the combined political might of hundreds of establishment pro-Israel organizations, has been involved in drafting platform planks for both parties.

The Israel lobby’s nonprofit arm alone employed 14,000 and claimed 350,000 volunteers in 2012. Though not financially relevant, 80 million Christian evangelicals provide a nationwide multiplier at the voting booth, the result of decades of intense Israel lobby cultivation. This is critical to the Israel lobby since according to Pew research, 82% of Jewish Americans do not belong to Jewish organizations, 70% are only somewhat or “not at all” attached to Israel, while 44% think settlement building is a bad idea. This suggests that Jewish supporters involved in the Israel lobby number only around 774,000, a population about the size of Fort Worth or Charlotte, and far from the monolith that major organizations in the lobby attempt to portray.

Many prospective candidates for national office must present position papers on Israel to regional AIPAC officials before being allowed to tap a national network of single issue pro-Israel donors for the seed-funding necessary to launch political campaigns. Any subsequent divergence from an essentially Zionist narrative or voting record can result in loss of this financial support, primary challenges and ousting from office.

This entire system, underpinned by an opaque influence network channeling millions of coordinated single-issue campaign contributions, is strongly opposed by most Americans (71%). Although there is seemingly little they can do about it, organization based on awareness, coupled with demands for overdue law enforcement and private lawsuits, could be the answer.

It is a testament to the lobby’s harmful propaganda campaigns that in 2014, as it battled the Iran nuclear deal, most Americans believed Iran already possessed nuclear weapons. A plurality of Americans – in contrast to much of the world – believe Palestinians occupy Israeli land and not the reverse.

Would Washington policymaking be so unreservedly Zionist if the Israel lobby did not dominate national elections? A recent California Democratic state party resolution suggests it would not. Passed through serious grassroots policy-setting that transcended Israel lobby roadblocks, the resolution covers issues opposed or unmentioned in the national two-party system. Respect for international law and human rights. Working through the UN. Challenging the Israel lobby’s toxic conflation of warranted campus protests and anti-Semitism.

However, national policymaking is only likely to improve to the degree that Zionism itself is legally challenged in the US as robustly as other past waves of foreign ideologies that were seed-funded and spread from abroad. Americans support this. When advised that the US once tried to enforce the 1938 Foreign Agents Registration Act over Israeli government-influenced public opinion and coordinated lobbying campaigns within the US, 66% of Americans favored a return to the days of challenging the lobby through the legal system.

The Zionist movement – acting through AIPAC – now appears committed to pushing the US into future military confrontations with Iran and Russia, further embroiling the US in other Middle East conflicts that serve no American interest, overturning the JCPOA, and building Israel up for military adventures. Whether Americans can “de-Zionize” Congress and government agencies to a level proportionate with their own identity is a question that could well determine the survival of the country.

Grant F. Smith is the director of the Institute for Research: Middle Eastern Policyin Washington and the author of the 2016 book, Big Israel: How Israel’s Lobby moves America. On September 2, 2015, he filed a lawsuit in federal court to disclose secret CIA intelligence aid to Israel.