You Are Here: Home → 62% of Americans Oppose Giving F-35 Jets to Israel 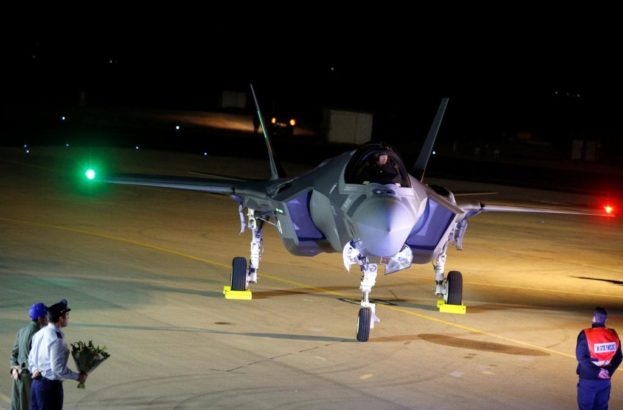 F35 fighter jet plane, also known as the Adir, lands at Nevatim air base in Israel

Israel has begun taking possession of allotments of F-35 stealth jets from the US. Although many reports describe the transfer as an Israeli “purchase” of the aircraft, under an unpopular ten-year $38 billion aid deal, Israel will receive fifty of the jets at no cost.

Results from a public opinion poll of 1,000 American adults fielded through Google Surveys reveal widespread popular opposition to the transfer. 62% of Americans are opposed providing the jet fighters to Israel, while 35% support the transfer and 3% have other responses.

Question: Under terms of a $38 billion 10-year aid package obtained for Israel by its US lobby, Israel has begun receiving the first of fifty F-35 jet fighters costing $100 million each.

The survey was fielded between August 29 and September 4 and has an RMSE score of 7.4%. Individual response data is available from Google.

Many believe the jets will be modified by Israel to carry nuclear weapons. The US has adopted a policy of gagging official statements or release of US government information about Israel’s nuclear weapons program. However, in 2015 a federal judge forced the DOD to release a report confirming Israel’s expansive nuclear weapons production laboratories and work on hydrogen bomb development.

Under the Arms Export Control Act, US presidents are required to sign special waivers before delivering US foreign aid to non-Nuclear Nonproliferation Treaty signatories. Israel has not signed the NPT and no US president has ever issued Israel waivers.

Grant F. Smith is the author of the book Divert! NUMEC, Zalman Shapiro and the diversion of U.S. weapons-grade uranium into the Israeli nuclear weapons program. He is director of the Institute for Research: Middle Eastern Policy in Washington, D.C.