You Are Here: Home → Israel Snipers Train Their Weapons On International Press 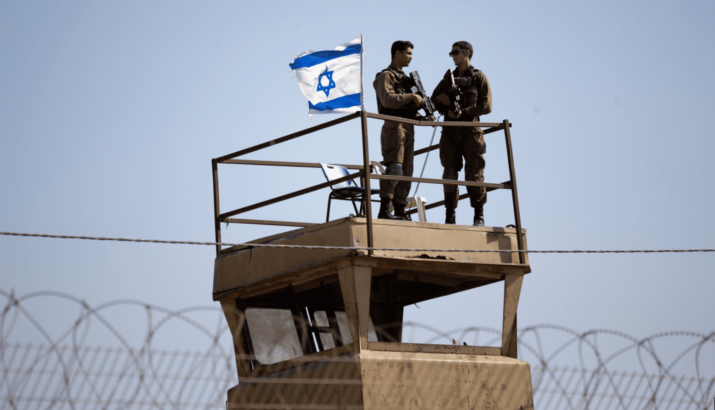 Israeli soldiers on a watchtower along the Israel – Gaza Border, May 15, 2018. Israel faces growing diplomatic fallout from the use of lethal force against unarmed protesters. (AP/Ariel Schalit)

Reporters Without Borders has asked the International Criminal Court to investigate Israeli sniper fire on journalists, which the NGO said it regards as war crimes. 2 journalists have been killed and at least 90 injured since the start of the Great March of Return on March 30.

Three separate journalists, not for Palestinian news outlets, have reported being attacked by Israeli forces. While Israel says that it carefully considers each shot fired, if believed, would leave no other conclusion than that the IDF was intentionally trying to harm or liquidate journalists covering the conflict on the Israeli border. Specific information was reported by an Al-Jazeera reporter, who gave the following report to France24 news:

On Monday, protests at the Gaza border left 60 Palestinians dead and more than 2,000 wounded. Many images show people attacked by tear gas drones and injured by live bullets fired by Israeli snipers. Some videos suggest that the Israeli army is intentionally aiming at journalists covering these events.

In this video below, Al-Jazeera journalist Hoda Abdel-Hamid, a three-time Emmy award winner, hunches down as a bullet whizzes near her. She is wearing typical journalist gear, with a helmet and a bulletproof vest labeled “Press”.

This happened too – pretty sure elites snipers know what and where they are targeting pic.twitter.com/faRx8GxcKd

In this second video, an Israeli army drone unleashes tear gas on the spot where Abdel-Hamid stood with other journalists. She had trouble breathing, so her cameraman takes her to a nearby car. He goes back to continue filming

FRANCE 24 spoke to Abdel-Hamid. This is what she said:

Yesterday in two instances, I was attacked. First, a sniper’s bullet landed less than one metre away. The second time, tear gas fell from a drone. We were not close to the fence, but in an evident journalist position, behind the protesters. Both attacks happened in the same place.

The Israeli soldiers who are shooting are elite snipers, and Israel always says that each bullet is carefully considered, so they aimed at us intentionally. When it comes to the drone, an Israeli pilot behind the fence is directing the drone and monitoring what is below, then the pilot presses the release button. The Israeli army is a sophisticated army – they know what they’re doing.

“You cannot think otherwise than that they target journalists – unless they are shooting randomly, which the army denies”

But I’ve been lucky – many other clearly-marked journalists have been injured and have died. [Editor’s Note: Since the start of the “Great March of Return” protests on March 30, two Palestinian journalists have died after being shot by Israeli forces. Israel’s foreign minister claimed one of them was a member of Hamas]. When you stand near the border and you see snipers [in their] high positions, you cannot think otherwise than that they target journalists – unless they are shooting randomly, which the army denies. In addition, it does not feel like it, because [in my case] it was one pop and that’s it.

A few years back in Beit El [north of Ramallah], a Jeep stopped, a soldier got out and shot tear gas at our team.”

FRANCE 24 spoke to two other journalists who were present Monday and who said they were hit by tear gas. One of them said: “We received the tear gas while we were very far from the border. The tear gas canisters were dropped by drones. So we have reasons to believe they did this knowingly.”

On Monday, Reporters Without Borders asked the International Criminal Court to investigate sniper fire on Palestinian journalists, which the NGO said it regards as war crimes.

Back on April 7, Reporters Without Borders condemned “the disproportionate reaction by Israeli forces, who killed or wounded several civilians including journalists and we urge the Israeli government to adhere strictly to UN Security Council Resolution 2222 on protecting journalists, adopted in 2015”.

The situation going down on the Israeli border is a black mark on international law, as Israel apparently violates it right and left, while the biggest ‘upholders’ are sipping on tea and complaining about the Russians or the forecast.

But if someone mentions gas or a nerve agent somewhere, then all of the sudden it matters, and suddenly it becomes ‘highly likely’ that the Russians had something to do with it.

Of course, in this case, Israel is just exercising its ‘right’ to defend itself against reporters armed with cameras and microphones.