You Are Here: Home → Palestinian journalists form committee to file legal case against Israel at ICC 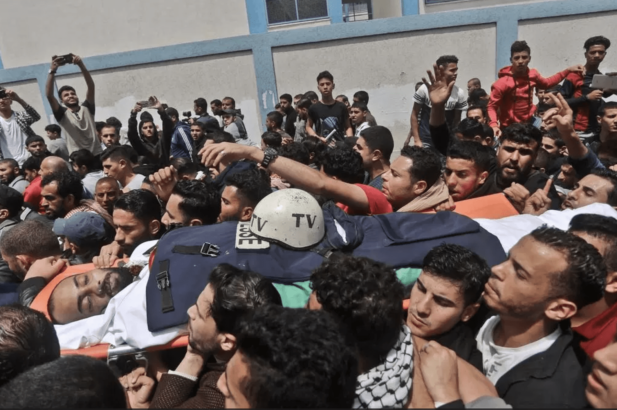 Israel has killed 2 Palestinian journalists in 2018 and wounded at least 90 others; the Palestinian Journalists Syndicate (PJS) has decided to file a case in the International Criminal Court and other European courts.

RAMALLAH, May 17, 2018 (WAFA) – The Palestinian Journalists Syndicate (PJS) Thursday decided to form a committee to file a legal case against Israel at the International Criminal Court (ICC) and other European courts.

The committee will be in charge of preparing and collecting documents that prove Israeli institutions and personnel’s responsibility for crimes committed against Palestinian journalists in the Gaza Strip and the West Bank.

As part of its ongoing efforts to highlight Israeli crimes committed against Journalists in Palestine, PJS is expected to take part in the Association of European Journalists meeting in Spain, the regional meeting for the Trade Unions in the Middle East in Lebanon and the Union for the Mediterranean meeting in Greece.

It said, “These are important platforms to shed light on the violations and crimes committed against Palestinian journalists and garner international support for PJS’s efforts.”

PJS reiterated its condemnation of the restrictions imposed on Palestinian journalists in the West Bank and the Gaza Strip, including PJS that was prohibited from entering Jerusalem to visit wounded journalist Yasser Qdeih, who was injured while covering the Gaza protests.

In 2018, Israeli armed forces killed journalists Yasser Murtaja and Ahmad Abu Hussein, while covering the protests in the Gaza Strip and wounded 90 others since the beginning of this year.